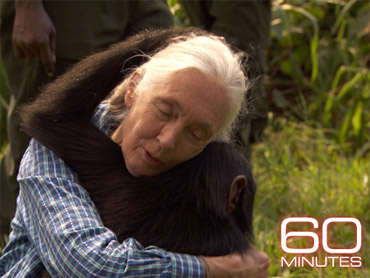 Humans share more than 98 percent of the same DNA with chimpanzees, which is probably why there has always been a fascination with them. What we know of them is mostly because of one woman, whose name has become synonymous with chimps: Jane Goodall.

She was launched to fame by National Geographic, whose stories about her life in an African forest with chimpanzees made her an iconic figure.

Goodall was the first to discover that wild chimpanzees were capable of making and using tools, a revelation that turned the scientific world upside down by challenging the convention that tool making was what made humans unique.

Fifty years later, Goodall considers her role now to be more important than ever - which is why "60 Minutes" and correspondent Lara Logan wanted to go back with her to Africa.

60 Minutes Overtime: Jane Goodall
Lara Logan talks about her profile of Jane Goodall and how she and producer Max McClellan hit the "chimp jackpot" on their trip to Tanzania.

Goodall and the "60 Minutes" team headed to the Gombe Forest; the only way to get there is by boat.

"The hills there, you know, which are like a desert now? When I arrived in 1960, in July, those hills were forest," Goodall observed during the boat ride.

We traveled with her across Lake Tanganyika, the longest lake in the world, and then into the forest which Goodall called home for decades.

She first came to Tanzania, to a stretch of tropical forest on the remote eastern shores of the lake, to study chimpanzees when she was 26 years old. She was a young girl from England with no scientific training - just a notebook and binoculars.

"How would you describe what it was like 50 years ago?" Logan asked Goodall.

"It was a kind of magical place where I never knew each day what I might see or discover," she replied.

We followed the forest trails for hours through the towering trees and tangled vines searching for Goodall's chimpanzees. Then, the chimps' unmistakable sound led us right to them.

Goodall instantly recognized her favorite family, three generations right there in front us. She has followed this family for 50 years and gave them the names they're still known by today.

Asked what she loves about them, Goodall said, "Just everything."

There was little "Google," at nearly two years old one of the youngest there. There was also Google's mother "Gaia," who Jane has known for 17 years.

His grandmother "Gremlin," Goodall says, is one of the oldest and most gentle chimps in the forest. She has known her since she was born in 1970.

Today, the chimps are so used to humans they don't mind getting close.

But since it's now known that chimps can catch our infectious diseases, we had to keep a safe distance.

When Goodall arrived in the forest in 1960, she had the opposite problem.

At first, the chimps didn't want to come near her. "First they were afraid. Then they became belligerent. And then when I wouldn't go away, well, 'I guess she's ok.' They came to trust," she recalled.

That trust allowed Goodall to enter the world of these wild animals. The personal details she spent years documenting today constitute the largest scientific database in the world for this species.

"It was obvious watching them that they could be happy and sad," she told Logan. "And then the communication signals, kissing, embracing holding hands, patting on the back, shaking the fist, swaggering, throwing rocks. All of these things done in the same context we do them."

"How did you see their sense of humor?" Logan asked.

"I've seen a mother laugh when she hears her older child who hasn't paid attention and he hasn't noticed which way she's gone. And the older child is going through the forest, whimpering, crying, you know. And the mother's up in the tree, quite quiet. And you hear her going, just laughing," Goodall explained, while mimicking the chimpanzee calls.

We spent 12 hours in the forest with Goodall, before we witnessed firsthand what made her so famous: the chimpanzees were using sticks as tools to fish for termites.

Her discovery was initially received with some skepticism. "Some of the scientists thought I had taught them," she explained.

"That would have been quite an achievement," Logan remarked.

"Especially, as I couldn't get near them back then. It would have been very clever," Goodall replied.

With the discovery came research funding from the National Geographic Society.

And fame: she and her work were featured in National Geographic movies, including "Miss Goodall and the Wild Chimpanzees," narrated by Orson Welles.

"The films and the magazines took this early footage all around the world. But particularly to the U.S.," Goodall remembered. "It changed everything."

"And made you world famous," Logan remarked.

"The chimps made me famous, yes," Goodall replied.

We watched some of the old films - images that captivated the world.

"There was definitely a bit of 'Beauty and the Beast.' I mean, I know that," Goodall said, laughing. "This young girl, I see myself back then, when I look at myself. And I, 'Yeah, no wonder the men fell in love.'"

In one movie, a chimp named "Figan" was filmed playing with Goodall. "We didn't know back then that chimps caught all our infectious diseases. There wasn't any feeling of doing anything wrong. It was amazing, incredible to be able to have that relationship with wild animals wasn't it?" she said.

It was Goodall's childhood fascination with animals that brought her to this remote corner of Africa to study them.

"Did you have a real sense of purpose when you landed on the shores?" Logan asked.

"No," Goodall said. "I think I had a real sense of adventure."

"How would you describe the Jane of those days?" Logan asked.

"Was that well received?" Logan asked.

"Tell me you weren't," Goodall joked.

"This is not my story!" Logan replied.

While Goodall's work had a huge impact, it was sometimes undermined by the fact that she had never studied science.

"Was it hard to be taken seriously by the scientific community?" Logan asked.

"Oh, I was not taken very seriously by many of the scientists. I was known as a 'Geographic' cover girl," she replied.

Asked what she thought of that, Goodall said, "Well. I didn't care. At least I didn't think I did. Because you know, I was studying these chimpanzees and if people thought I did it wrong, well, let them go and do it differently. But let me do it my way."

But there was something she didn't like about the chimps: "I hated the fact that they could be very cruel and brutal and that they have a dark side just like us," Goodall told Logan.

Another of Goodall's discoveries: chimpanzees kill their own species, one more way they resemble humans.

Goodall said this discovery surprised her. "I thought they were like us, but nicer."

"And they're not?" Logan asked.

At times, it was very dangerous for Goodall.

A chimp named "Frodo" was particularly violent and nearly killed her one day. "He flipping well came up, and dragged me down, stamped on me. It hurt. He bashed my head onto a rock, and it was bleeding. And then he went away, and I thought 'Oh well I've survived.' And then he came back. And did it again. And then he pushed me over the edge. And if there hadn't been some little bushes growing there, I wouldn't be here now, 'cause it was a way big drop," she remembered.

There's also footage of Frodo's older brother "Freud." Although he looks menacing, Bill Wallauer, who shot the footage, says it's just a show meant to intimidate.

Wallauer came to Africa to work for the Jane Goodall Institute and lived in the forest for 15 years.

The institute carries on Goodall's work in Africa through Wallauer and a team of researchers and scientists, who come from all over the world.

Goodall says she would still be living in the forest, but that she had to leave to try to save the chimpanzees. Their numbers have been falling ever since she arrived there, from over a million then to less than 300,000 today.

Poaching and loss of habitat have made them an endangered species.

At age 76, that keeps Goodall on the road 300 days a year. From the halls of Congress, to the stage of a packed rock concert, to a school in Uganda, she's constantly raising money and raising awareness.

Protecting chimpanzees is still at the core of Goodall's mission today. She's helped create four sanctuaries, including one in Uganda, for orphaned chimpanzees and she has inspired 15 more across Africa.

"What are the reasons their mothers are killed?" Logan asked.

"Well, sometimes it's bush meat and there's still some of the live animal trade going which means you shoot the mother to take the baby," Goodall said.

Asked how urgent it is to save these creatures, she said, "Well, if they weren't here they'd be dead."

As much as Goodall loves chimpanzees, there's something about her they seem to love: while "60 Minutes" cameras were rolling, one young chimp stood on her shoulders and played with her.

They young chimps we encountered were so like children: playful, curious, and very affectionate.

All of the chimps at the sanctuary we visited had been vaccinated against a range of infectious diseases. To get this close to them, we had to be vaccinated as well.

(Editor's Note: The Jane Goodall Institute does not endorse handling or interfering with wild chimpanzees. The chimps being handled in this broadcast are orphans who live at a rehabilitation center.)

For us, it was a final glimpse into Goodall's world: the woman who bridged the divide between humans and animals and changed the way we think about them.

"We're part of the animal kingdom. Not separated from it. We could have a blood transfusion from a chimp if you matched the blood group. You really could. And the other way around too," she explained. "People say to me, 'Thank you for giving them characters and personalities.' I didn't give them anything. I merely translated them for people."