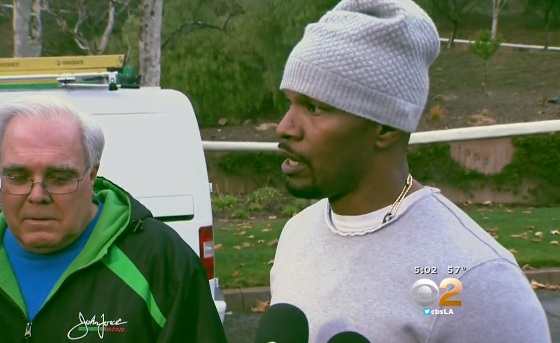 HIDDEN VALLEY, Calif. -- A California man is alive today thanks to the quick actions of actor Jaime Foxx.

Brett Kyle, 32, of Newbury Park was speeding in his white 2007 Toyota Tacoma on Potrero Road east of Hidden Valley Road west of Thousand Oaks when he went off the roadway, struck a drainage pipe and flipped over multiple times Monday night, according to California Highway Patrol Officer Marco Marin, reports CBS Los Angeles.

The vehicle came to rest on its passenger side and burst into flames outside Foxx's mansion.

Foxx said he heard the crash and rushed outside to pull Kyle, who is suspected of being drunk, out of his burning truck just seconds before it was fully engulfed.

CBS Los Angeles caught up with the actor outside his home on Tuesday afternoon.

"I don't look at it as heroic. I just look at it as, you know, you just had to do something. And it all worked out," Foxx said as he consoled the driver's father, who went to Foxx's home to thank him for saving his son.

"As I'm getting him out, I said, 'You've got to help me get you out because I don't want to have to leave you.' I said, 'You've angels around you,'" the Oscar winner recalled.

With tears rolling down his face, the victim's father, Brad Kyle, said to CBS LA: "I just kept watching it [security video] and going my God, my God, he didn't have to do a thing. I think we all hope that we can do something when the time is there. But the question is do we act or do we fear our own lives, and he did not."

Kyle said he saw several other cars passing by but did not stop. But Foxx said there was one car that did stop. That driver is an EMT, who happened to have scissors to cut the seat belt so Foxx was able to pull the man out of the burning vehicle.

The Academy-Award winner said that EMT's name is Christian.

Kyle was rushed to the hospital to be treated for head, chest and neck injuries. He was also arrested on suspicion of driving under the influence.