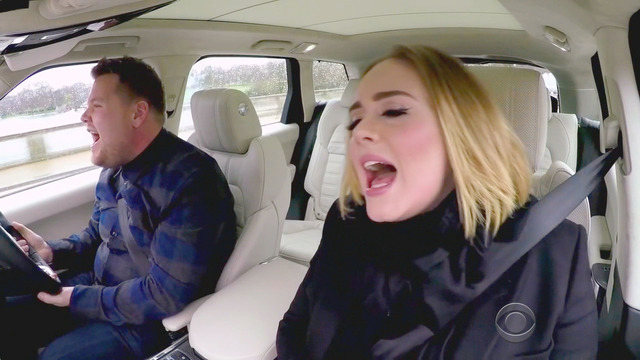 It's another record for Adele. And she has helped CBS' "The Late Late Show with James Corden" garner its own.

The "Carpool Karaoke" featuring Adele is the most watched late-night YouTube clip ever.

As of Wednesday night, more than 67.6 million people have watched the duo cruise through London.

As first reported by Variety, within its first five days on YouTube, the video generated 42 million views, according to data from Tubular Labs.

CBS News' Mark Phillips reported back in January about the carpool karaoke phenomenon.

Corden's carpool karaoke segments are a signature feature on his show. And the latest thing in pop music has become about the hottest thing on the web.

Why does it work?

Maybe because singing along in the car is what people do. And what could be better than singing along with people like Adele, Justin Bieber, One Direction, Sir Elton John or Stevie Wonder?

Carpool karaoke was just one of the ideas Corden had when he was planning his show a year ago. CBS News spoke to him then -- when a walk along Thames River in London showed he was already a popular showbiz figure in Britain.

Fans screamed after him.

"I don't think that was for me I think it's more the camera," Corden said at the time.

But it was for him. And the popularity seems to have stuck with him.

"Every now and then in your career there's one thing -- and they are few and far between -- where both critics and audiences go 'Wow'," said Corden.

Maybe it was the rapping Adele that made 45 million people -- and counting -- go "Wow."