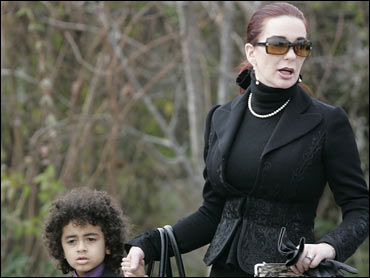 The 5-year-old child of James Brown and his partner, Tomi Rae Hynie, is not included in the will read Thursday to six of the entertainer's children, attorneys for the late singer say.

While the will provides for six children, Hynie's son, James Jr., is not one of those listed in the document, attorney Strom Thurmond Jr. told The Associated Press.

The will was read Thursday in Aiken but has not been filed in probate court, said Buddy Dallas, another Brown attorney.

The gates to his home were locked soon after his death, Dallas said, until attorneys could get the estate's legal affairs in order.

The house is owned by the trust and "has been that way since August of 2000," Dallas said. "Technically, the trustees own it for the benefit of the trust. It was not in the name of James Brown and hasn't been that way for years.".

Photos: The Godfather Of Soul

Hynie's attorney, Thornton Morris, said he doesn't know anything about the will.

"She was locked out of the house so she doesn't know where the will that's being probated was found," Morris said of his client. "She has no knowledge to when this particular will was executed."
By Katrina A. Goggins