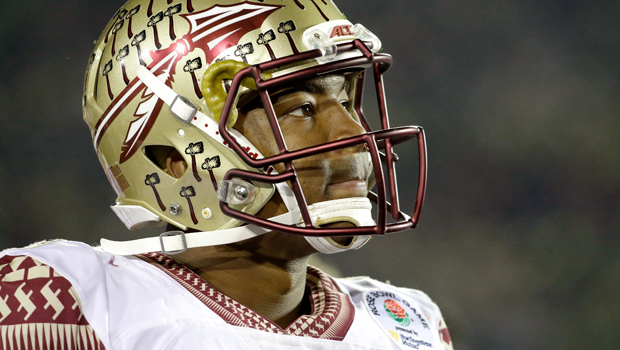 CHICAGO -- You don't pass up a potential franchise quarterback.

Not in today's pass-happy NFL.

So Jameis Winston is headed to Tampa Bay as the first overall selection and Marcus Mariota goes to Tennessee at No. 2. They'll take their Heisman Trophies (Winston in 2013, Mariota last year) and try to turn two downtrodden franchises into contenders, maybe even champions.

Neither was in Chicago, choosing to watch - and celebrate - at home with their families.

It was the sixth time since 1967 that quarterbacks went 1-2, and this was no surprise. The biggest question was whether Florida State's Winston had too much off-field baggage for the Bucs. Obviously not.

His college coach, Jimbo Fisher, has no doubts either.

"There are always bumps in the road," Fisher said. "But as far as on the field, he'll learn. He has an unbelievable ability to learn and learn fast.

"Off the field he's an extremely great guy. People will be shocked with how he represents (the Bucs)."

"It's a family town. And great men like Derrick Brooks and coach Lovie Smith and people like Mike Alstott make that town the way it is, and that's part of the football community. I look forward to getting involved in the football community and even the Tampa Bay community itself. I was blessed to have those men in my life before this process started."

Some questioned Mariota having barely taken any snaps behind center in Oregon's quick-tempo attack, but Titans coach Ken Whisenhunt, who has done big things with such veteran quarterbacks as Ben Roethlisberger, Kurt Warner and Philip Rivers, clearly isn't concerned.

"He's a talented young man who has a very good feel for the position and how to process those things," Whisenhunt said, "and we're excited to get a chance to work with him."

Naturally, Mariota isn't worried about the doubters, either.

"I believe in my abilities and the hard work that I've put in," he said. "And that's one thing is that I can't control other people's opinions. I've just got to do what I can do and that's putting in the hard work and getting ready for the next chapter. People are always going to have their opinions and say what they want to say."

Winston and Mariota, who each had a year of eligibility remaining, will meet in the season opener in Tampa Bay.

The first senior taken was Iowa tackle Brandon Scherff by Washington in the fifth spot, a bit of a surprise.

Tampa has the receivers to help Winston in Vincent Jackson and Mike Evans, both of whom went over 1,000 yards last year despite shoddy quarterbacking. Tennessee can't make the same claim.

Each of those teams went 2-14 in 2014, but coaches Smith and Whisenhunt, in their first seasons in charge, survived the awful record. Now, they presumably have the main building tool.

After Scherff, the Jets, normally heavily cheered when the draft was held in New York - it's in Chicago for the first time in 51 years - were loudly booed when they went on the clock. And when they went for Southern Cal DT Leonard Williams, rated by some as the best overall player in this crop, the jeers increased exponentially.

Why? Because the Bears were next up and need a dynamic player at the position.

Still, the local team was cheered as if Jay Cutler had just thrown for a TD when it grabbed West Virginia's game-breaking receiver, Kevin White. After trading top wideout Brandon Marshall to the Jets, the Bears had a big void there.

Dan Quinn, the Falcons' new coach after he helped build Seattle's dynamic defense, got a nice tool in Clemson linebacker Vic Beasley. The Giants selected Miami offensive tackle Ereck Flowers and St. Louis finished off the top 10, in which there were no trades, by taking Georgia running back Todd Gurley, who comes off a major knee injury.

The pick drew some reactions of disbelief from the crowd of 2,800 in the theater and 50,000 outside in what the league calls Draft Town. No RBs went in the first round of the past two drafts.

"He's special, yeah he is," Rams coach Jeff Fisher said. "When his career is over, he'll be a great pick."

Minnesota took the first defensive back, Michigan State's Trae Waynes, and then the proceedings got a big lift.

Well, it was actually Roger Goodell who got the lift when 339-pound DT Danny Shelton of Washington bear-hugged him and elevated the commissioner about a foot off the ground.

Shelton, dressed in Samoan garb, was chosen by Cleveland, then the Saints got Stanford OT Andrus Peat and the Dolphins bolstered their receiving group with Louisville's DeVante Parker.

Finally, a trade was made, with San Diego moving up two spots to 15 to get another running back, Wisconsin's record-setting Melvin Gordon. San Francisco got the Chargers' first-rounder, a fourth-rounder and next year's fifth-rounder.

From Winston until Marcus Peters went to Kansas City at No. 18, no players with major behavioral issues in college were chosen. The cornerback was dismissed from the Washington Huskies last year after several arguments with coaches.