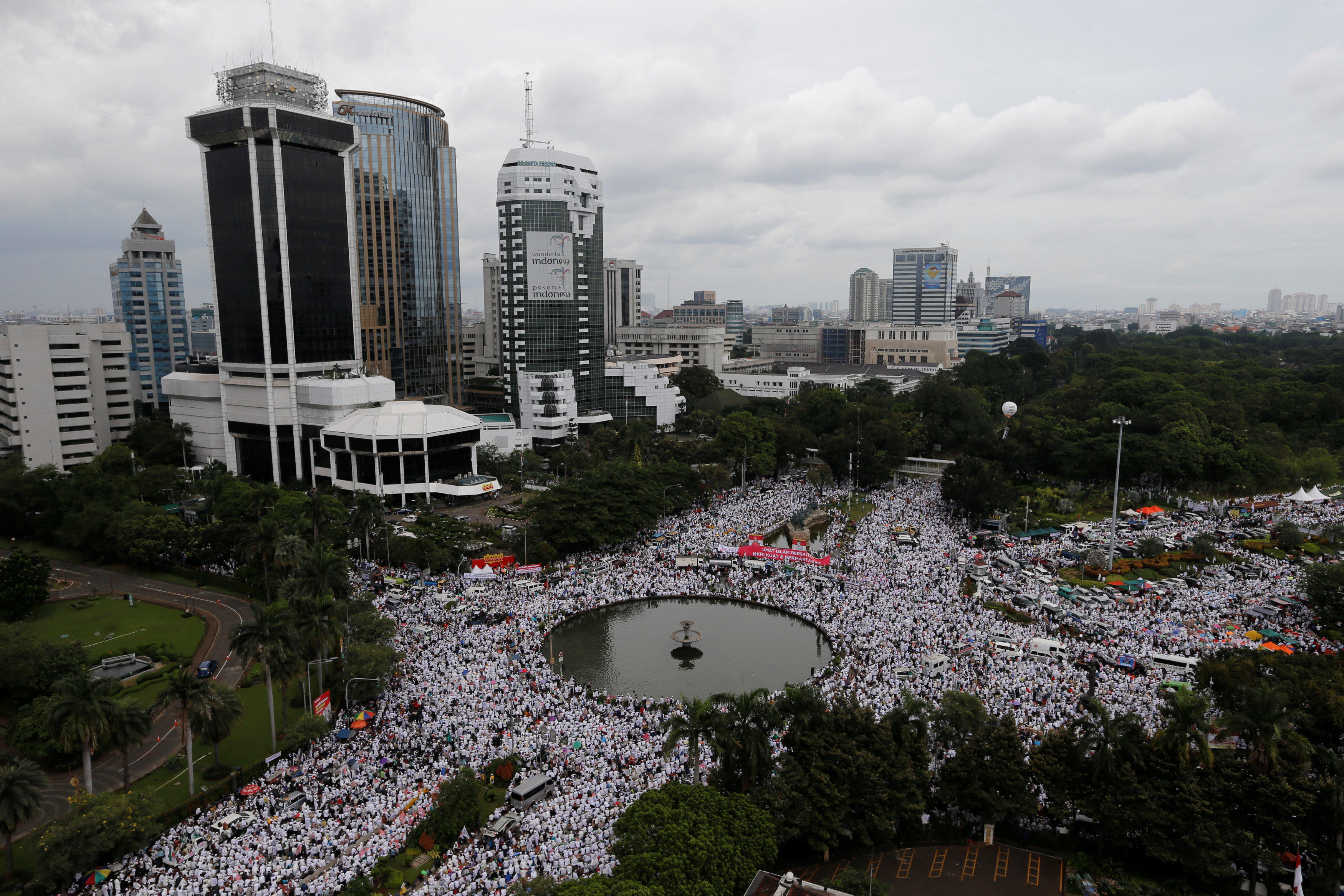 JAKARTA, Indonesia -- At least 200,000 conservative Muslims rallied in the Indonesian capital on Friday in the second major protest in a month against its minority Christian governor who is being prosecuted for alleged blasphemy.

President Joko “Jokowi” Widodo, who is a political ally of the Jakarta governor, Basuki “Ahok” Tjahaja Purnama, and angered hard-liners by being out of the city during the first protest, unexpectedly went to the national monument to join Friday prayers with the sprawling crowd. He called for protesters to disperse peacefully. They cheered and then broke into chants calling for Ahok’s arrest, but later people were streaming peacefully out of the area into a main thoroughfare of the city.

Organizers had agreed to concentrate the protest around the vaulting monument to reduce disruptions but the area quickly overflowed. National Police spokesman Rikwanto, who goes by one name, said police estimated 200,000 people were on the streets. Police say 22,000 officers and 5,000 soldiers can be called on to ensure the demonstration stays orderly.

A protest Nov. 4 against Ahok, the first ethnic Chinese to be Jakarta governor and the first Christian in half a century, attracted about 100,000 people. After nightfall, it turned violent, with one death and dozens injured. Police want Friday’s protest to disperse in the early afternoon following prayers.

The crowds massed in the area of the national monument formed a sea of white that spilled into surrounding streets while gridlocked motorists sat on the sidewalks. Some held huge banners calling Ahok a blasphemer who should be jailed while others chanted and prayed. The blasphemy controversy erupted in September when a video circulated online in which Ahok criticized detractors who argued the Quran prohibits Muslims from having a non-Muslim leader.

It has challenged the image of Indonesia, the world’s most populous Muslim nation, as practicing a moderate form of Islam and has shaken the government of Jokowi, who accused unnamed political actors of trying to undermine him. The son of former president Susilo Bambang Yudhoyono is vying against Ahok for Jakarta governor in elections set for February.

Separately, police said they had arrested eight people suspected of treason including Rahmawati, who is a younger sister of former President Megawati Sukarnoiputri, and a well-known musician turned politician Ahmad Dani. Two other people were arrested for alleged crimes under Indonesia’s law on electronic information and transactions.

Lisnawati Djohar, a resident of West Sumatra’s Padang city, said she flew to Jakarta with a dozen friends for the protest.

“I’ve been called to defend Islam,” she said. “As a Muslim, I feel guilty if I refuse a demand to defend my religion. I believe Ahok insulted the holy Quran and it’s hurt us.”

Rizieq Syihab, leader of the Islamic Defenders Front, a vigilante group that helped organize the demonstrations, gave a fiery speech to the protest in which he asserted Indonesia would be peaceful if there was no blasphemy and other problems such as gays.

Roads leading into the city were clogged in the early morning as white-robed protesters walked to the city center from corners of the sprawling metropolis.

Speaking on the main stage at the national monument, National Police Chief Gen. Tito Karnavian called for the protesters to support the legal process in the blasphemy case.

“We have worked to finalize the dossier and have handed over to the prosecutors. Therefore, I request support from all of you so that the legal process goes well,” he said as the crowd cheered “God is Great.”

The accusation of blasphemy has animated the political opponents of Ahok and Jokowi, including hard-liners who have used the issue to seize a national stage for their extreme agenda, which includes Shariah law.

Ahok’s blasphemy case took a step forward Thursday when it was formally accepted for trial. The offense is punishable by up to five years in prison.

Police say Ahok can’t leave the country during the case. However, hard-line Muslim groups continue to demand he be arrested.