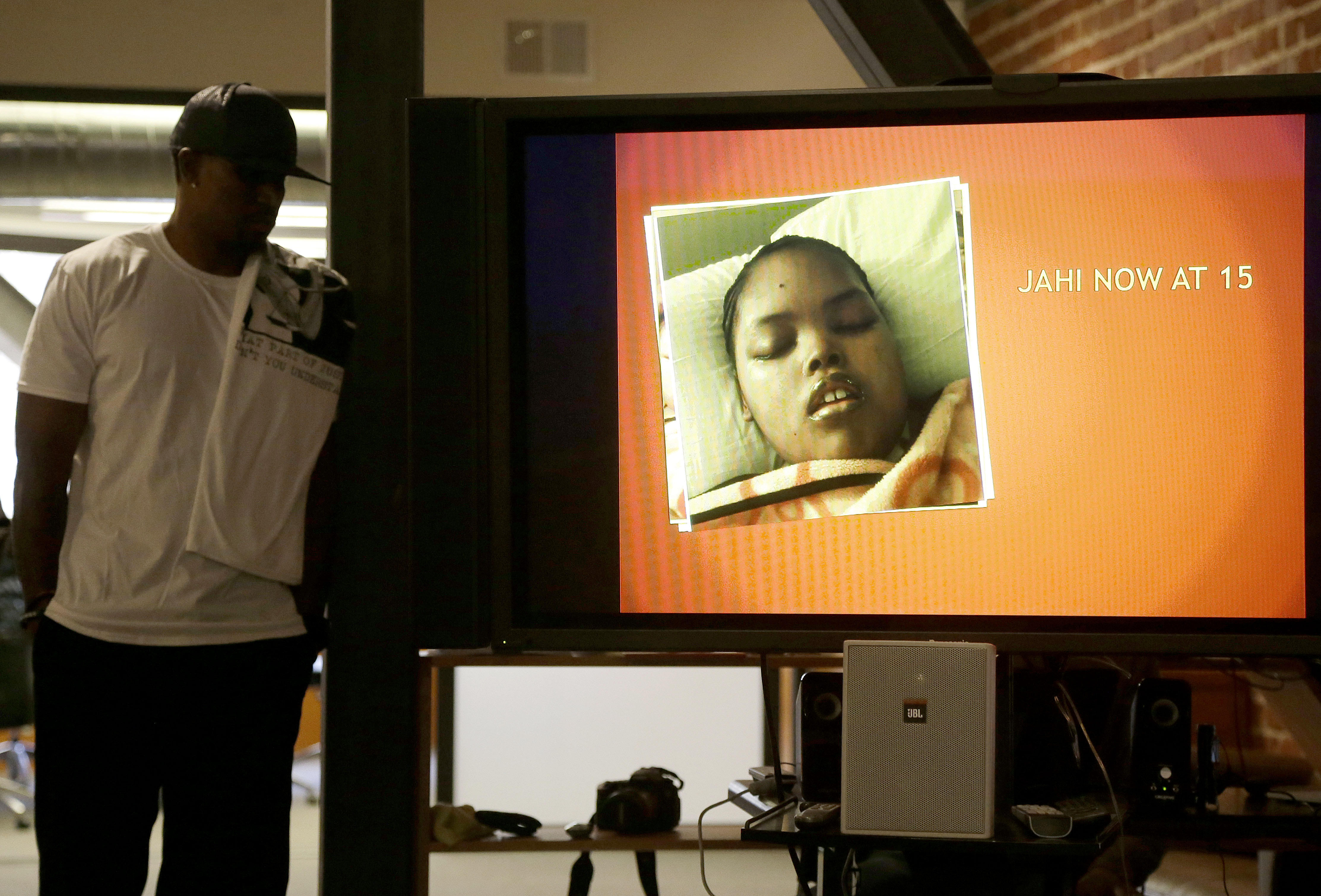 SAN FRANCISCO — A girl at the center of the medical and religious debate over brain death has died after surgery in New Jersey, her mother said Thursday. Nailah Winkfield said doctors declared her daughter Jahi McMath dead on June 22 from excessive bleeding and liver failure after an operation to treat an intestinal issue.

McMath's case drew national attention when her family refused to accept the conclusion of doctors who declared the girl dead in December 2013, when she was 13, after suffering irreversible brain damage during routine surgery in California to remove her tonsils. Several specialists concurred after neurological tests, and a coroner signed a death certificate.

Winkfield, however, said her Christian beliefs compelled her to fight for continued care for her daughter, who she said showed signs of life through toe wriggles and finger movements.

After a court battle with the hospital, Winkfield had her daughter flown to New Jersey, where she has remained on life support and received care in the state that accommodates religions that don't recognize brain death.

"Jahi wasn't brain dead or any kind of dead," Winkfield said. "She was a girl with a brain injury and she deserved to be cared for like any other child who had a brain injury."

In a 2014 Facebook post after the girl was moved from Children's Hospital in Oakland, Winkfeld wrote, "Hopefully my daughter can change some of the ways brain death is viewed in today's society. Honestly, I think she already has."

The family maintained that McMath could hear and sometimes respond to simple commands, like moving a hand, and they captured instances on video that appeared to show her response. In a New Yorker article reexamining the case earlier this year, Winkfield said she asked her daughter nearly every day: "'Are you O.K. with what I'm doing? Do you want to live? Are you suffering?'" Winkfield told the reporter Rachel Aviv:

"I know that things change—people change. If Jahi has given up and doesn't want to be here anymore, I'm just going to go with what she wants." She said that Jahi answers her questions by either squeezing her hand or pressing her own index finger toward her thumb, a signal for "yes" that Nailah taught her. "When I see that," she said, "I think, Who am I to not want to live? Because many days I do want to die. But then I see her every day, trying her best."

Winkfield said she quit her job, sold her home in Oakland and used savings to pay for McMath's care in New Jersey. The state's Medicaid program and donations have also contributed to the girl's care.

"These last four-and-a-half years have not been easy," Winkfield said. "I can go to sleep knowing I did everything possible for my kid and no one can take that away from me."

Winkfield and her lawyers had been trying to rescind the California death certificate as part of a medical malpractice lawsuit filed against Children's Hospital in Oakland.

In refusing to throw out the lawsuit last year, a judge ruled that it was up to a jury to determine if the girl was still alive.

Attorney Chris Dolan said the New Jersey death certificate eliminated that argument, but he and Winkfield are still debating whether to continue the fight and possibly set a precedent so other religious families don't have to go through the same situation.

"My wish is that she will get some laws changed," Winkfield said about her daughter. "I really hope that people learn from this and learn not to pull the plug so fast."

Children's Hospital lawyers had argued that the family did not subject McMath to tests accepted by the American Medical Association to determine brain death.