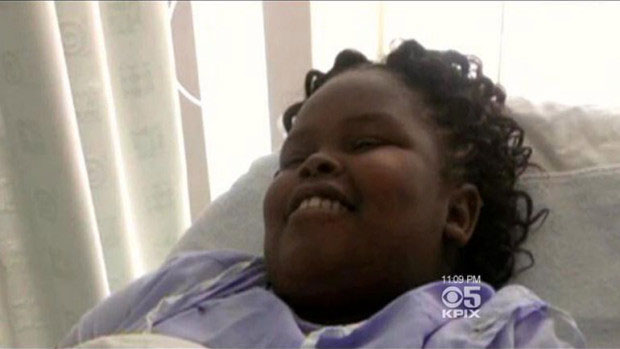 The family of a California teen who was pronounced dead after a surgical complication two years ago has filed a federal civil rights lawsuit seeking to have her death certificate revoked, CBS San Francisco reports.

Attorney Christopher Dolan said Wednesday that he and the family of Jahi McMath have spent much of the past year asking state and county officials to revoke the death certificate and declare her legally alive, with no success. The lawsuit names the state and various county officials as defendants and alleges that they are violating McMath's rights by refusing to consider evidence that she is alive, if severely brain injured.

The family says it has evidence that McMath does not meet the criteria for brain death, including the fact that she sometimes moves on command and that her body remains in good condition and has even entered puberty. They argue this evidence shows she should be declared alive.

"Nobody is saying Jahi is going to get up tomorrow and walk, but we're saying she deserves the same care as anyone else in California with a brain injury," Dolan said. "We want all of her rights restored to her so that she can come back to California." The girl is currently being cared for at a facility in New Jersey.

The lawsuit argues that the laws regarding brain death are unconstitutional because they do not provide any means for a finding of death to be challenged or reversed, according to Dolan.

McMath was declared brain dead on Dec. 12, 2013 at the age of 13 after developing complications from surgery for sleep apnea at UCSF Benioff Oakland Children's Hospital.

Her family rejected the decision and fought to keep her on life support. After a legal battle, they won permission to move her out of the hospital for continued care. Before they could move her, however, hospital officials required the family to get a death certificate from the Alameda County coroner.

McMath's mother, Nialah Winkfield, said she hopes the lawsuit will allow her to bring her daughter back home to California and obtain health insurance for her there. She moved Jahi to New Jersey because state law there recognizes a religious exemption to brain death findings and continues to recognize McMath as a living person for the purposes of obtaining health insurance.

"I want her to have the same rights as any other disabled person," Winkfield said, speaking by Skype to reporters in California.

Winkfield said it has been hard to be so far away from family and friends. She has been forced to give up her job, sell her house and tap her mother's resources to keep going. She no longer lives with her other two children, she said.

Dolan said he is providing his legal services to the family for free.

In March, the family also filed a medical malpractice suit against the hospital in Alameda County Superior Court. That case has a case management conference scheduled for Jan. 8.

Attempts to reach hospital officials for comment were unsuccessful.