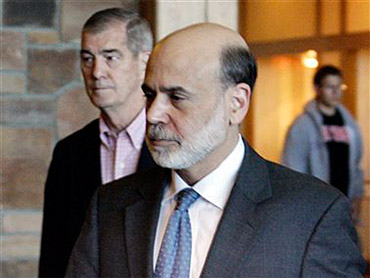 Irwin M. Stelzer is a contributing editor to The Weekly Standard, director of economic policy studies at the Hudson Institute, and a columnist for the Sunday Times (London).


Americans look to three sources for clues about the future of our economy: President Barack Obama, in charge of fiscal policy; Federal Reserve Board chairman Ben Bernanke, in charge of monetary policy; and Warren Buffett, the revered "sage of Omaha" whose authority rests on his decades-long record of successful investment and whose popularity stems from his pithy statements ("Nothing sedates rationality like large doses of effortless money").

The president's policies are no secret. He has run huge deficits to stimulate the economy, first with a stimulus plan, most recently with cash-for-clunkers. The consensus is that these outlays have had a modest stimulative effect, and that other measures continued from the Bush administration have done a good deal to avert the collapse of several banks deemed too big to fail. Obama has taken deficits from their peace-time level of around 6 percent of GDP to a staggering 13 percent. As Buffett put it in a recent op-ed piece, "Fiscally we are in uncharted territory."

Bernanke accurately describes his polices as "aggressive". He dropped interest rates to zero to get businesses to borrow and consumers to spend; devised a variety of schemes to encourage banks to lend to one another and to businesses; and printed money with which to buy Obama's IOUs and keep interest rates down. At last week's gathering of the world's central bankers in Jackson Hole, Wyoming, Bernanke also characterized his monetary policy as "complementary" to fiscal policy. His willingness to coordinate with the Treasury might have risked the Fed's ability to retain its independence from the politicians who are seeking to gain control of Fed policies.

Which brings us to the Omaha sage. Buffett supported all of the cash infusions and other steps the administration and the Fed have taken. But now he worries. Indeed, it is fair to say that the once united Obama-Bernanke-Buffett troika is no longer quite so united. The president wants to continue spending and borrowing. His health care plan will add trillions to the deficit over ten years; his plan to improve education, billions; the bail-out of the auto companies more trillions. Deficits have become so large that they are now the number one concern of Americans. In January voters thought the stimulus a good idea by a margin of 43 percent to 27 percent; now only 34 percent say it was the right thing to do, while 43 percent say it was not -- despite an unemployment rate of 9.5 percent, headed towards double digits.

The government is spending almost twice as much as it is taking in, which means that balancing the books will be no trivial task, especially since Democrats in Congress will resist almost any expenditure cuts: They have waited too long to get their pet projects and expansion of the welfare state on the books to be bothered by mounting deficits.

Obama plans to make up some of the deficit by raising taxes. But he has promised the middle class that he will not raise their taxes by a single dime, and will instead soak the "rich" whom he feels did too well during the Bush years. The problem is that that lemon isn't big enough to squeeze for much revenue before the pips squeak, and our corporate and other tax rates are already among the highest in the developed world.

Bernanke is dropping hints that if fiscal profligacy remains the Obama policy he will have to tighten sooner and harder than if deficits are brought under control. Buffett agrees. But neither man thinks that the recovery is robust enough to warrant tightening just yet. "Economic activity appears to be leveling out and the prospects for a return to growth in the near term appear good," Bernanke told his counterparts. But -- there always seems to be a "but" -- "critical challenges remain." If the Fed responds to recent signs of recovery by tightening now, it might repeat the error the Fed made in the 1930s, when it aborted the recovery by tightening too soon.

The third of our key players, Warren Buffett, agrees that the hour for tightening has not yet arrived. But he worries that when it does, the Fed might not be able to counteract continued massive federal deficits. Inflation is a politically attractive alternative to cutting spending or raising taxes. "High rates of inflation," notes Buffett, "never require a recorded vote and cannot be attributed to any specific action that any elected official takes." Damned attractive to political lifers.

Bernanke will have to rely on more than the on-going stream of economic data in deciding when to pull cash out of the system. Consider only the most recent data in his in-box.

* Sales of existing homes jumped by 7.2 percent in July after rising by 3.6 percent in June, to the highest level in two years. But almost one third of the sales were of repossessed properties, and inventories of unsold homes actually rose.

* Single-family home starts are up (1.7 percent in July, 17.8 percent in June) and builders' sentiment is improving as buyer traffic increases, but the percentage of loans in foreclosure or one mortgage payment behind is increasing at the fastest pace since records were first kept in 1972.

* The rate of job loss is declining, but the unemployment rate is not.

* Several banks are earning record profits and have repaid the money borrowed from the government, while others remain basket cases and are hoping that the inability of commercial property companies to refinance $1 trillion in mortgages maturing next year does not bring them down, a hope encouraged by the recent rise in office rentals.

* Sharp recessions have historically been followed by rapid and substantial rebounds in economic activity, but right now consumers (70 percent of the economy) are staying on the sidelines, trying to rebuild their wealth and save should the rainy days hit their families.

* The credit markets are somewhat easier, but many banks are tightening lending standards: one local banker told me that if Bill Gates applied for a mortgage he would be turned down because he is self-employed.

Conclusion: the economy is recovering, and probably already growing a bit. If the recovery continues next year's Jackson Hole confab will focus on finding some exit strategy that prevents the sort of inflation rate that will so devalue the already-sinking dollar that the Chinese decide they are no longer interested in adding to their piles of Uncle Sam's IOUs.

By Irwin M. Stelzer
Reprinted with permission from The Weekly Standard