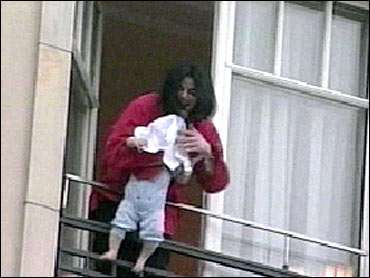 Michael Jackson removed his mask, discussed the baby-dangling incident, the plastic surgery, the child abuse allegations and other aspects of his chaotic and troubled life in a documentary shown on British television Monday night.

In one scene, Jackson is even shown cradling his youngest child - known by the nickname Blanket - as he feeds him a bottle of milk.

The self-styled King of Pop said that the infant son he dangled from a hotel balcony in Germany was conceived by a surrogate mother.

"I used a surrogate mother and my own sperm cells. She doesn't know me and I don't know her," he said.

But at another point in the 90-minute "Living With Michael Jackson" by journalist Martin Bashir, Jackson said he had been in a relationship with the unidentified mother when the baby was conceived.

Bashir - well-known for an interview with Princess Diana, during which she conceded being unfaithful to Prince Charles - spent eight months making the program, which will be shown 8 p.m. EST Thursday on ABC's "20/20." (The original air date had been Friday.)

Fans outside the building cheered, but tabloids accused Jackson of reckless endangerment. Since then, the 44-year-old singer has called the incident a "terrible mistake," but not during the documentary.

Jackson denied he had endangered the baby's life in Berlin. "I would never do that to my children, or any child. We were waving to thousands of fans down below and they were chanting they wanted to see my child, so I was kind enough to let them see," he told Bashir. "They got the full experience and he enjoyed it."

The singer's 5-year-old son, Prince Michael I, and 4-year-old daughter, Paris, were born during his marriage to Debbie Rowe, his plastic surgeon's nurse, which ended in 1999. Jackson also was once married to Lisa Marie Presley.

Jackson has routinely kept his children's heads covered while escorting them in public. He often wears a surgical mask himself to hide his face, although he shed it for the documentary.

Jackson allowed the cameras to film all three of his children, but he still kept their faces covered with a mask or a scarf because he doesn't want them recognized in public, followed by paparazzi or kidnapped.

Jackson denied ever having had any alterations to his face other than two operations on his nose because "it helped me breathe better so I can hit higher notes."

He said his face was never reshaped with plastic surgery.

Jackson became a child star singing with his brothers in the Jackson 5, and later had one of the most successful albums of all time, 1982's "Thriller," which sold an estimated 26 million copies in the United States.

He had strong follow-up albums with 1987's "Bad" and 1991's "Dangerous," but his career began to collapse in 1993 after he was accused of molesting a boy. Jackson has maintained his innocence, and reached a multimillion-dollar settlement. Charges were never filed.

Jackson became visibly upset when Bashir asked about the case, saying he had paid the family to avoid "a long, drawn-out thing on TV like O.J." Simpson.

When Bashir asked Jackson about his friendships with children, Jackson said: "I have slept in a bed with many children."