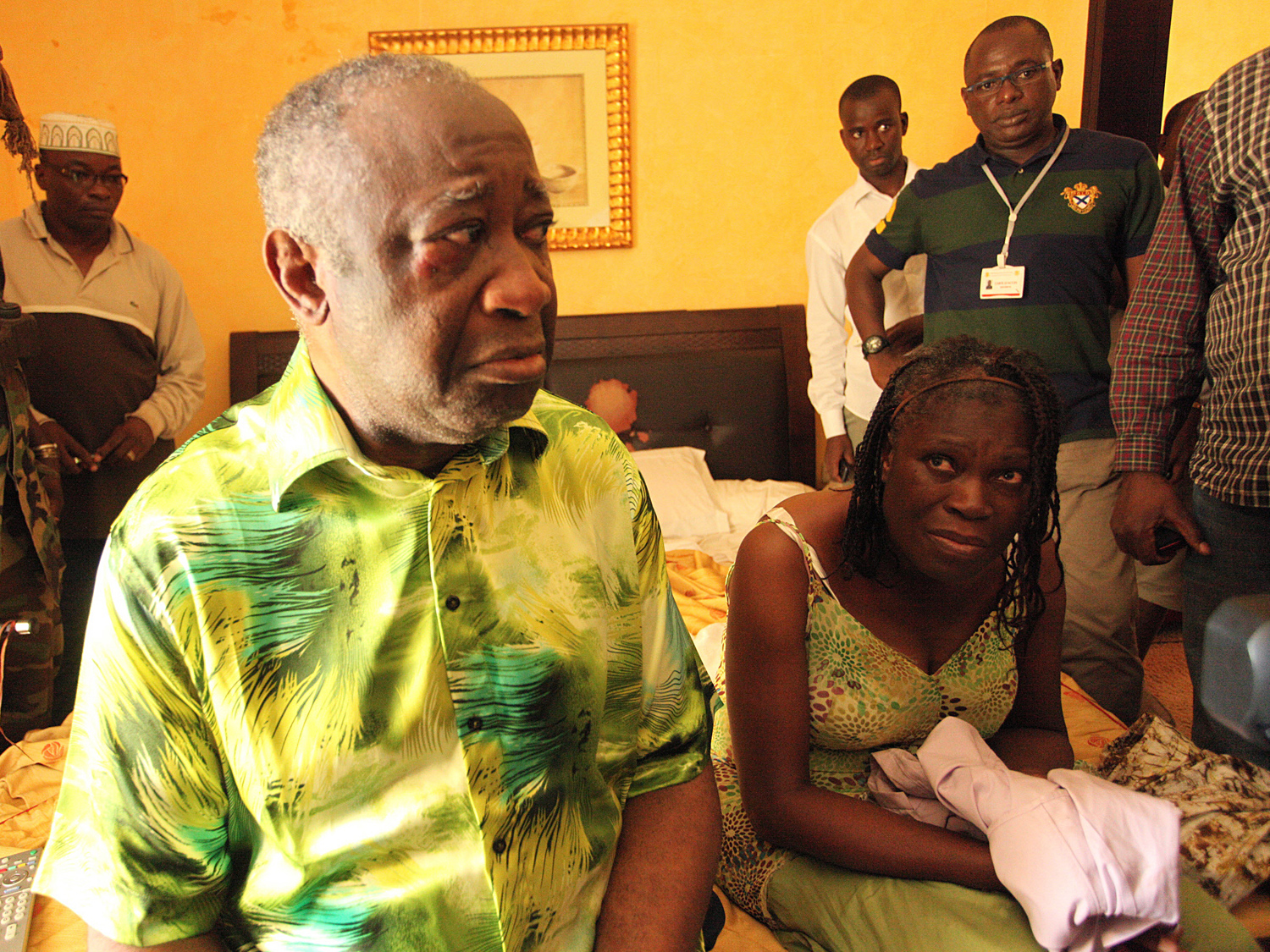 ABIDJAN, Ivory Coast - Forces stormed the bunker where Ivory Coast's strongman Laurent Gbagbo hung on to power Monday, arresting the man whose refusal to hand over the presidency to the election winner left hundreds dead and threatened to re-ignite a civil war in the world's largest cocoa producer.

Issard Soumahro, a pro-Ouattara fighter at the scene, told The Associated Press that the ground offensive to seize Gbagbo came after the French launched airstrikes until at least 3 a.m. Monday.

"We attacked and forced in a part of the bunker. He was there with his wife and his son," Soumahro said.

He added that Gbagbo was tired and had been slapped by a soldier, but was not otherwise hurt.

Gbagbo was interrogated and brought to the Golf Hotel, where Ouattara has been trying to run his presidency since the Nov. 28 vote. Officials were waiting for him to sign a document that formally hands power over to Ouattara, Soumahro said. TV footage from the Golf Hotel showed Gbagbo in a white sleeveless undershirt, and then donning a colorful print shirt.

"The nightmare is over for the people of Ivory Coast," Ivory Coast's U.N. ambassador said.

The capture came after French military forces in this former French colony deployed tanks for the first time near a bunker at the presidential residence where Gbagbo had been hold up with his family.

"The U.N.'s more muscular role in the Ivory Coast - along with the military involvement of France - may result in a resolution to the bloody civil war which has taken its toll since the Presidential elections four months ago, with the arrest of former President Laurent Gbagbo by the Ouattarra forces," said CBS News foreign affairs analyst Pamela Falk, from the U.N. Monday.

"If the U.N. Mission in Ivory Coast is able to protect Gbagbo, as they are today, in accordance with the Security Council mandate, until he is brought to justice, then there is hope that the people of the Ivory Coast, who elected Ouattarra, will be able to find some end to the violence," Falk reports.

"Although the immediate crisis is over with Gbagbo's arrest, a significant humanitarian crisis is looming with more than 100,000 people outside of the Ivory Coast, who fled the violence," Falk added, "U.N. Under-Secretary-General for Peacekeeping Operations Alain Le Roy told reporters today that the humanitarian crisis was hugh."

"There wasn't one single French soldier at the residence of Laurent Gbagbo," he said.

He was seen soon after in a hotel guarded by U.N. peacekeepers, where election winner Ouattara had been trying to run the presidency.

Gbagbo had refused to refused to relinquish his hold on power after Ouattara was declared winner of the 2010 presidential election. The dispute pushed the world's largest cocoa producer to the brink of renewed civil war.

In Washington Secretary of State Hillary Rodham Clinton said that the transition "sends a strong signal to tyrants - they may not disregard the voice of their own people in free and fair elections, and there will be consequences to those who cling to power."

She also called upon all Ivorians to remain calm and to build a peaceful transition.

Secretary-General Ban Ki-moon said the arrest of Gbagbo ends months of unnecessary conflict, and he pledged U.N. support to the new government.

"This is an end of a chapter that should never have been," Ban said. "We have to help them to restore stability, rule of law, and address all humanitarian and security issues." He also said Gbagbo's physical safety should be ensured.

Youssoufou Bamba, who was appointed U.N. ambassador by Ouattara, said Gbagbo will face justice. He predicted that fighting that has wracked this former French colony will stop as soon as pro-Gbagbo forces learn of his capture.

But it will be very difficult for Ivory Coast to mount a domestic court to try Gbagbo, said Richard Downie, an Africa expert at the Washington-based Center for Strategic and International Studies, adding that it would "probably be a lightning rod for more unrest."

"(Ouattara) didn't want to come to power this way, through the barrel of a gun," Downie said. "He was elected fairly and freely. But this is the situation he was dealt. It's going to be incredibly difficult for him to bring the country together."

In western Ivory Coast, rebels fired into the air in jubilation in Duekoue, causing a panic among refugees who fled in all directions or dropped to the ground in terror. In villages going east from Duekoue people danced in the streets, waving tree branches. In one village, young men paraded with the orange, white and green Ivorian flag.

"It's a victory ... considering all the evil that Laurent Gbagbo inflicted on Ivory Coast," Ouattara's ambassador to France, Ali Coulibaly, told France-Info radio. He emphasized that the man in power for a decade would be "treated with humanity."

"We must not in any way make a royal gift to Laurent Gbagbo in making him a martyr," Coulibaly said. "He must be alive and he must answer for the crimes against humanity that he committed."

Some critics had accused Gbagbo of clinging to power in part to avoid prosecution by the International Criminal Court. ICC prosecutor Luis Moreno-Ocampo has begun preliminary examination of possible war crimes and crimes against humanity in Ivory Coast, including accusations leveled against forces seeking to install Ouattara.

Ivory Coast was divided into a rebel-controlled north and a loyalist south by a 2002-2003 civil war. The country was officially reunited in a 2007 peace deal. The long-delayed presidential election was intended to help reunify the nation but instead unleashed months of violence.

Gbagbo, who won 46 percent of the vote, held power for a decade and already had overstayed his mandate by five years when the November election took place. When the country's election commission and international observers declared he lost the election after it was finally held, he refused to step down.

The former history professor defied near-universal pressure to cede power to Ouattara. The two set up parallel administrations that vied for control of the West African economic powerhouse.

Ouattara drew his support from the U.N. and world powers. Gbagbo maintained his hold over the country's military and security forces who terrorized his opponents.

He wrapped himself in the country's flag as he took the oath of office at his shotgun inauguration.

"No one has the right to call on foreign armies to invade his country," Gbagbo, still taking a nationalistic stance, declared in a televised address on New Year's Eve. "Our greatest duty to our country is to defend it from foreign attack."

Ivory Coast gained independence from France in 1960, and some 20,000 French citizens still lived there when the civil war broke out.

French troops were then tasked by the U.N. with monitoring a cease-fire and protecting foreign nationals in Ivory Coast, which was once an economic star and is still one of the only countries in the region with four-lane highways, skyscrapers, escalators and wine bars.

Other West African nations had considered military intervention to remove Gbagbo, but those efforts never materialized and sanctions imposed on Gbagbo and his inner circle by the U.S. and European Union failed to dislodge him. Human rights groups accused his security forces of abducting and killing hundreds of political opponents as the deadlock dragged on.

While the United Nations passed resolutions allowing its peacekeepers to intervene to protect civilians, anti-Gbagbo neighborhoods in Abidjan continued to be pummeled with mortars. So many people were killed that the local morgue began stacking corpses on the floor because they had run out of space in the refrigerated vaults.

Ouattara attempted to assert his authority from the Golf Hotel, protected by U.N. peacekeepers, while the would-be president tried to financially strangle Gbagbo by imposing an embargo on cocoa exports. In a desperate move, Gbagbo seized control of foreign banks in Abidjan — prompting their flight and a liquidity crunch.

After months of political deadlock, forces backing Ouattara began a dramatic offensive in late March, taking the administrative capital and reaching the largest city and commercial capital, Abidjan, in just days. They met resistance in Abidjan, where Gbagbo and his family sought refuge in an underground bunker at the presidential residence.