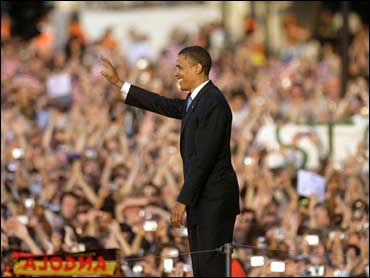 What disturbed me about Barack Obama's Berlin speech were some reoccurring utopian assumptions about cause and effect - namely, that bad things happen almost as if by accident, and are to be addressed by faceless, universal forces of good will.

Unlike Obama, I would not speak to anyone as "a fellow citizen of the world," but only as an ordinary American who wishes to do his best for the world, but with a much-appreciated American identity, and rather less with a commonality indistinguishable from those poor souls trapped in the Sudan, North Korea, Cuba, or Iran. Take away all particular national identity and we are empty shells mouthing mere platitudes, who believe in little and commit to even less. In this regard, postmodern, post-national Europe is not quite the ideal, but a warning of how good intentions can run amuck. Ask the dead of Srebrenica, or the ostracized Danish cartoonists, or the archbishop of Canterbury with his supposed concern for transcendent universal human rights.

With all due respect, I also don't believe the world did anything to save Berlin, just as it did nothing to save the Rwandans or the Iraqis under Saddam - or will do anything for those of Darfur; it was only the U.S. Air Force that risked war to feed the helpless of Berlin as it saved the Muslims of the Balkans. And I don't think we have much to do in America with creating a world in which "famine spreads and terrible storms devastate our lands." Bad, often evil, autocratic governments abroad cause hunger, often despite rich natural landscapes; and nature, in tragic fashion, not "the carbon we send into atmosphere," causes "terrible storms," just as it has and will for millennia.

Perhaps conflict-resolution theory posits there are no villains, only misunderstandings; but I think military history suggests that culpability exists - and is not merely hopelessly relative or just in the eye of the beholder. So despite Obama's soaring moral rhetoric, I am troubled by his historical revisionism that, "The two superpowers that faced each other across the wall of this city came too close too often to destroying all we have built and all that we love."

I would beg to differ again, and suggest instead that a mass-murdering Soviet tyranny came close to destroying the European continent (as it had, in fact, wiped out millions of its own people) and much beyond as well - and was checked only by an often lone and caricatured US superpower and its nuclear deterrence. When the Soviet Union collapsed, there was no danger to the world from American nuclear weapons "destroying all we have built" - while the inverse would not have been true, had nuclear and totalitarian communism prevailed. We sleep too lightly tonight not because democratic Israel has obtained nuclear weapons, but because a frightening Iran just might.

Will we reject torture and stand for the rule of law? Will we welcome immigrants from different lands, and shun discrimination against those who don't look like us or worship like we do, and keep the promise of equality and opportunity for all of our people?

it is the world, not the U.S., that needs to listen most. In this regard I would have preferred Sen. Obama of mixed ancestry to have begun with "In the recent tradition of African-American Secretaries of State Colin Powell and Condoleezza Rice," rather than the less factual, "I don't look like the Americans who've previously spoken in this great city."

I want also to shout back that the United States does stand for the rule of law, as even the killers of Guantanamo realize with their present redress of grievances, access to complex jurisprudence, and humane treatment - all in a measure beyond what such terrorists would receive anywhere else. It is the United States that takes in more immigrants than does any country in the world, and thus is the prime destination of those who flee the miseries of this often wretched globe.

American immigration policies are humane, not only in easy comparison to the savagery shown the "other" in Africa or the Middle East, but fair and compassionate in comparison to what we see presently accorded aliens in Mexico, France, and, yes, Germany. Again, in all this fuzziness - this sermonizing in condescending fashion reminiscent at times of the Pennsylvania remonstration - there is the whiff of American culpability, but certainly not much of a nod to American exceptionalism. Politicians characteristically say to applauding audiences abroad what they wish to hear. True statesmen often do not.

In terms of foreign affairs, I think Americans will finally come to vote for a candidate, who with goodwill, a lot of humility, and a little grace, can persuade the world that universal moral progress, freedom, and material prosperity best advance under the aegis of free markets, constitutional government, and individual freedom, rather than for someone who seems to think, in naïve fashion, that these are necessarily shared and natural human practices, or are presently in force outside the West - or will arise due to dialogue or international good intentions.
By Victor Davis Hanson
Reprinted with permission from National Review Online