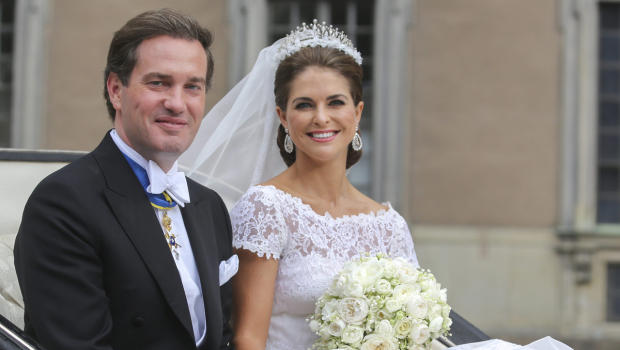 "The Office of the Marshal of the Realm is delighted to announce that H.R.H Princess Madeleine gave birth to a daughter on February 20, 2014, at 10.41 p.m. local time New York," Chancellor of the Realm Svante Lindquvist said in a statement.

Both the 31-year-old princess and her newborn daughter, whose name was not disclosed, are in good health, the court said.

On Facebook, the new parents posted a photo of the baby's tiny footprint on O'Neill's inner arm.

"I'm overwhelmed!" Madeleine wrote in the posting. The proud papa showed reporters the footprint at a news conference Friday.

Fourth in line to the Swedish throne, Madeleine is the youngest child of King Carl XVI Gustav and Queen Silvia. She holds the titles of duchess of Halsingland and Gastrikland.

She married the London-born O'Neill in in Stockholm on June 8, 2013. The couple live mostly in New York, where the princess works for the World Childhood Foundation, a charity founded by Queen Silvia.

A 21-gun salute was fired in Stockholm, as well as other locations across Sweden, to mark the baby's birth.

"Today is a day of great happiness and thankfulness. We are filled with great joy. We now hope that Princess Madeleine and Christopher will be able to enjoy this unique time with their young daughter in peace and quiet," the king and queen said in a statement.

The baby is the second grandchild for the king and queen. Crown Princess Victoria and her husband, Prince Daniel, have a daughter, Princess Estelle, who turns 2 on Sunday.

O'Neill decided to keep his U.S. citizenship and declined to accept a Swedish title on his marriage. It wasn't immediately clear whether his new daughter would be given a title or be included in the royal succession.

The child would be barred from the succession if she is not raised in Sweden or if she is brought up as a Catholic, O'Neill's religion.

It's been a busy winter for royal births. In January, Britain's Queen Elizabeth II became a great-grandmother for the third time when her granddaughter Zara Phillips gave birth to Mia Grace Tindall.

Mia is the first child for Phillips, 32, and her rugby star  husband Mike Tindall -- and the perfect age to play with her second cousin Prince George, son of Prince William and the Duchess of Cambridge, the former Kate Middleton.