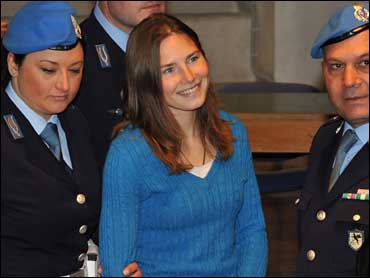 A prosecution witness testified Friday she heard a woman's scream that "made her skin crawl" on the night a British student was killed in the Italian university town of Perugia.

Nara Capezzali - whose apartment overlooks the one where 21-year-old Meredith Kercher was slain in 2007 - also said she heard at least two people running shortly after the scream.

The witness said later under cross-examination that she wasn't sure of the date of the events.

She was testifying at the trial of Amanda Knox, of Seattle, and her former boyfriend Raffaele Sollecito, who are accused of fatally stabbing Kercher. Both deny wrongdoing.

Kercher's body was found Nov. 2, 2007, with a stab wound to her neck in the home she shared with Knox. Prosecutors allege she was killed the night before during what began as a sex game.

In testimony Capezzali made a screeching noise to imitate the scream she said she heard from her living room window.

"It was a prolonged woman's scream," she said. "It was not normal, it made my skin crawl. Every time I walk near that window, I hear it again."

Capezzali said she heard the sound of running on a metal staircase near a parking lot, as well as through leaves and gravel. She said she looked out the window but "did not see anything."

When defense lawyers pressed Capezzali, she said she couldn't be sure of the date she heard the scream.

Knox and Sollecito appeared relaxed and smiling in court Friday as they greeted their lawyers. During a break in the proceedings, they smiled and gestured toward one another from a distance. On Thursday, Knox sent Sollecito a birthday card as he turned 25 behind bars, lawyers said.

More Perugia residents took the stand Friday, including the director of a local college where Sollecito stayed for two years until 2005.

Carabinieri paramilitary police officer Antonio Galizia told the court that Sollecito was found with a small quantity of hashish in 2003 in southern Italy.

Sollecito's defense lawyer Luca Maori downplayed both testimonies as describing only "a person with a quiet temper and no problems."

Prosecutors allege Kercher was killed during a sex game, with Sollecito holding her by the shoulders from behind while Knox touched her with the point of a knife. They say a third man, Ivory Coast national Rudy Hermann Guede, tried to sexually assault Kercher and then Knox fatally stabbed her in the throat.

Guede was convicted of murder in a separate trial last year and sentenced to 30 years in prison.

Knox and Sollecito have said they smoked hashish the night of the slaying. The Italian maintains he was at his own apartment in Perugia, watching a movie on his computer. He says he does not remember if Knox spent the whole night with him.

Knox's mother, Edda Mellas, told reporters on Friday that she brought books, including some in German, flip-flops and CDs to her daughter, who was "doing OK."

Mellas is expected to take the stand at a later stage in the trial, which resumes Saturday.