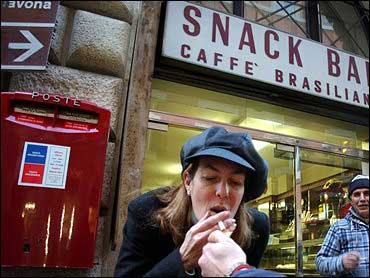 Office workers took their cigarette breaks on the street Monday after a strict law banning smoking in bars, restaurants, offices and other public spaces came into force in Italy.

Minutes after the law went into effect after midnight, a young man was fined for smoking in a bar in Naples, TV stations showed. The man's plea that a cigarette was only normal after a coffee won him no reprieve, and he was fined the minimum penalty of $36.

The law, which bans smoking in indoor spaces unless they have a separate area with continuous floor-to-ceiling walls and a ventilation system, is one of the toughest in Europe.

Among those fuming at the legislation are bar and restaurant owners who say the new rules will deter clients and that they don't have the time or money to create sealed-off smoking areas. They also have protested a provision requiring them to report on customers who flout the law, saying it is not their job to act as "sheriffs."

In Milan, an organization called "Polite Smokers" threw a party in Milan, titled "The Last Cigarette," to protest the law as it came into force.

Others showed their support for the law by burning piles of cigarettes in the street.

However, some have raised concerns about whether the law will be applied. In Rome, consumer group Codacons announced a lunchtime blitz of restaurants to check that the new rules were being enforced.

In a bar in central Rome, waitress Giorgia Pasqualetti complained about having to step onto the street whenever she wanted a smoke.

"Now when I take a break, I risk catching a cold," she said. "We do not have the space to create a separate smoking room, so the only way to enjoy a cigarette is outside."

Smokers ignoring the ban face fines of up to $363, while owners of premises risk penalties as high as $2,904.

Health Minister Girolamo Sirchia, a reformed smoker, warned that "the police are not joking, they can enter anywhere, including private offices."

In the first two months, however, officials would focus on prevention and education, he told the newspaper Corriere della Sera, with no sanctions "except in extreme cases."

The law, approved in 2003, was to have gone into effect in December, but an extension was granted through the holiday period. Bars and restaurants lobbied for more time to prepare no-smoking zones but have been denied.

The autonomous province of Bolzano, which has broad powers outside central government control, delayed the law's introduction until July to give restaurants and bars longer to create no-smoking zones, the ANSA news agency said.

According to the Health Ministry figures, about 26 percent of Italians are smokers.

Among other European countries, Norway and Ireland have harsher legislation that forbids smoking indoors and does not allow for the creation of a room for smokers.

But Spain, Germany, and Switzerland have no such rules. In the Netherlands and Bulgaria, the catering industry was granted a grace period in order to prepare for the new rules. Others, such as Greece and Romania, have regulations that are only loosely or sporadically enforced.
By Aidan Lewis