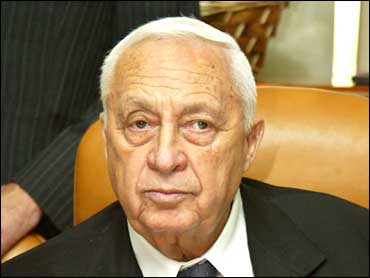 Israeli Prime Minister Ariel Sharon has signaled that he is serious about the latest peace plan, declaring that Israel's occupation in the West Bank must end. His words adopted the language of his dovish opponents and shocked his hardline allies.

Palestinian officials and Israeli sources said Sharon and Palestinian Prime Minister Mahmoud Abbas would meet Wednesday in Jerusalem, their second summit in two weeks. But Israeli media later reported the meeting was postponed until Thursday due to Abbas' heavy schedule.

A three-way summit with President Bush could take place as early as next week, possibly in Jordan.

Amid withering criticism from his own Likud Party over his Cabinet's acceptance of the U.S.-backed "road map" peace plan, Sharon indicated a 180-degree turnaround after decades of warning that an Israeli withdrawal from even small parts of the West Bank could endanger Israel's existence.

Settlers like Pinhas Wallerstein are accusing Sharon of betrayal.

"All of us think that this decision is even worse than the Oslo agreement," he said. For the settlers that's the ultimate insult, since they see the Oslo Accords as a catastrophe brought on by Sharon's left-wing opponents.

Skeptics, however, said it was yet another master performance from a wily politician.

"To keep 3.5 million people under occupation is bad for us and them," Sharon said in remarks broadcast on Israel Radio.

The term "occupation" is anathema to the Israeli right, which believes Israel has a legitimate claim to the West Bank and Gaza Strip for religious and security reasons.

Palestinians and their dovish Israeli allies routinely use the word "occupation" when demanding that Israel leave the West Bank and Gaza and dismantle Jewish settlements.

Palestinians claim all of the West Bank and Gaza for a state.

Israeli Army Radio reported Tuesday the Foreign Ministry was weighing allowing its official spokesmen to use the word "occupation," too.

On Sunday, Sharon's Cabinet conditionally approved the "road map," a three-phase plan that begins with a halt to violence and envisages a Palestinian state in the West Bank and Gaza Strip in 2005.

Despite the Israeli conditions, including a cessation of violence and renunciation of Palestinian demands for the "right of return" of all refugees and their families to Israel, some Arab leaders were hopeful.

"We are on the verge of peace," Jordanian Foreign Minister Marwan Muasher said.

Sharon told party critics that he was committed to finding a political solution to the conflict, including an Israeli withdrawal from West Bank population centers.

"This can't continue endlessly. Do you want to remain forever in Ramallah, Jenin, Nablus?" he asked.

Likud lawmakers charged that the road map was slanted in favor of the Palestinians and endangers Israel. Yuval Steinitz, a leading Likud member, said Sharon ignored the negative aspects of the plan.

In his remarks Monday, Sharon left himself an out.

Critics have said Sharon's long-held condition that all violence must stop before peace moves is unrealistic and guarantees failure of any peace initiative.