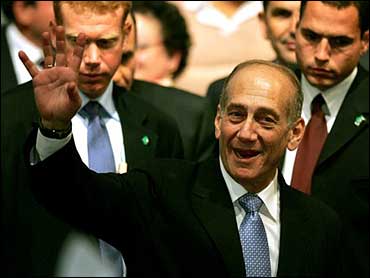 Acting Prime Minister Ehud Olmert declared victory for his centrist Kadima party in Israel's elections Tuesday, vowing to act on his own if necessary to draw Israel's final borders and "painfully" uproot Jewish settlers if negotiations with the Palestinians are not possible.

In his victory speech, Olmert vowed to draw Israel's final borders in the coming years. He said Israel preferred to reach a peace deal, but if the Hamas-led Palestinian Authority refuses to renounce terror, Israel would withdraw from parts of the West Bank unilaterally and it would hold on to other settlement blocs, reports CBS News correspondent Robert Berger.

Standing below a massive portrait of his mentor Ariel Sharon, Olmert addressed chanting Kadima members after exit polls and media reports of early results predicted the party would have enough seats in parliament to form a ruling coalition.

Building on the vision of Sharon, who formed the party shortly before succumbing to a devastating stroke that left him in a coma, Olmert claimed a mandate to withdraw from much of the West Bank and set Israel's borders, which he has said he will do by 2010.

With 99.7 percent of polling stations accounted for, the Kadima Party was winning 28 of 120 seats in parliament, the Election Commission reported.

Army Radio reported the same figures with 100 percent of the stations counted.

Officials said that even after 100 percent of the polling stations are accounted for, they would still have to count the votes of soldiers and Israelis who voted in locations other than their home stations, like invalids and election workers — so the total vote count would not be completed until Friday.

The turnout was the lowest in Israel's history, and the results showed voters turning away from conventional political parties to an assortment of third parties with agendas ranging from pensioner rights to the legalization of marijuana. The aftermath will likely be a period of difficult negotiations between Olmert and potential coalition partners.

"Today, Israeli democracy has spoken its piece, in a loud and clear voice," Olmert declared. "Israel wants Kadima," which means forward in Hebrew.

Olmert said he was ready for new peace talks and was prepared to make painful compromises such as uprooting some Jewish settlements in the West Bank and allowing Palestinians to have a state. But he demanded that the Palestinians be willing to compromise in return.

"In the coming period, we will move to set the final borders of the state of Israel, a Jewish state with a Jewish majority," Olmert said. "We will try to achieve this in an agreement with the Palestinians."

Olmert has said he would govern only with parties that accept his program, and projections showed a center-left coalition capturing 61 to 65 seats in the 120-member parliament. The hawkish parties fell far short of their plan to win enough seats to block Olmert's program.

As Israel held its election, the Palestinian parliament approved a new Cabinet led by the Hamas militant group. Incoming Palestinian Prime Minister Ismail Haniyeh told Al-Jazeera television that he opposed Olmert's plan. "Such a plan definitely won't be accepted by the Palestinian people or the Palestinian government," he said.

Allies of Palestinian President Mahmoud Abbas, a moderate from the Fatah Party, called for immediately renewing talks on the internationally backed "road map" peace plan under the auspices of the Palestine Liberation Organization, which he heads.

Olmert has said he supports the road map but will not wait indefinitely for a peace deal and would move unilaterally after a reasonable period of time.

Turning to the Palestinians, Olmert said: "We are prepared to compromise, give up parts of our beloved land of Israel, remove, painfully, Jews who live there, to allow you the conditions to achieve your hopes and to live in a state in peace and quiet."

"The time has come for the Palestinians ... to relate to the existence of the state of Israel, to accept only part of their dream, to stop terror, to accept democracy and accept compromise and peace with us," he said.

Israeli officials have ruled out talks with Hamas unless the Islamic group renounces violence and accepts Israel's right to exist, demands Hamas has so far rejected. It remains unclear whether Olmert would negotiate with Abbas without a change in Hamas' position.

The leader of the largest party is traditionally asked first to try to form a ruling coalition. Whether Olmert chooses to form a government with dovish parties or more hardline factions could determine his ability to carry out his plan.

Olmert could form a coalition with Labor, the dovish Meretz and the party that advocates pensions for retirees, or he could add the ultra-Orthodox Shas or United Torah Judaism parties to his government.

Olmert, the vice prime minister and former mayor of Jerusalem, took over the party after Sharon suffered a devastating Jan. 4 stroke and immediately became the favorite to win the elections. Much of Kadima's campaign was built around Sharon, Israel's most popular politician, and his legacy resonated with many voters.

"It was important for me to vote, to continue the way of Sharon," said Rina Golan, 65, who voted for Kadima.

But Sharon had been much more circumspect than Olmert about his post-election plans. He never spoke of drawing final borders, and said there would not be an additional unilateral pullout in the West Bank.

Labor's total represented a strong showing by new party leader Amir Peretz, who ran on a social platform advocating a higher minimum wage and guaranteed pensions for the elderly.

Likud, which had dominated Israeli politics for decades, was crushed, appearing to capture less than a third of the 38 seats it won in the last election. Benjamin Netanyahu, the former prime minister and current party head, warned that further unilateral withdrawals would bring Hamas closer to Israel.

"We have no doubt that the Likud suffered a hard blow," Netanyahu told his party activists. He blamed Sharon, who bolted Likud to form Kadima, for leaving behind "a broken and shattered party."

A strong majority of voters turned away from Likud and Labor, the only two parties that have ever ruled Israel, to vote for the new Kadima and fringe parties. Though other attempts to create a strong centrist party in Israel have failed, analysts said Sharon's personal popularity gave Kadima its edge.

Israel Beitenu, a party aimed at Israeli immigrants from the former Soviet Union, would like to redraw Israel borders to put fewer Arabs and more Jews inside. It posted a double-digit showing as expected, with partial returns giving it 11 seats. The party has two lawmakers in the outgoing parliament.

The pensioners' party appeared to be the surprise protest vote of the election, taking eight seats, according to partial results. The party, headed by former Mossad spymaster Rafi Eitan, who oversaw a sensational espionage operation against the U.S. in the 1980s, was not represented in the last parliament. Kadima said the party was a natural coalition partner for Olmert.

The issues at stake in the election — the future of relations with the Palestinians and Israel's presence in the West Bank — were momentous, but the turnout, 63.2 percent, was the lowest ever for an Israeli parliamentary election.

The voter apathy in Israel's sixth election since 1992 was attributed partly to Kadima's wire-to-wire dominance during the campaign and partly to Israeli's disillusionment with rampant government corruption and party switching by veteran politicians that was viewed as purely opportunistic.