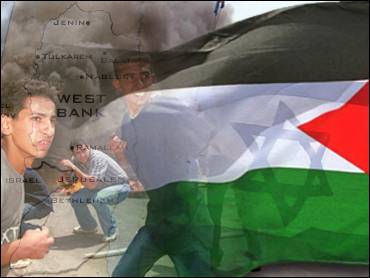 Israeli forces killed a senior Hamas militant in a missile strike in northern Gaza on Thursday, just two days before U.S. Secretary of State Colin Powell was to arrive in the region to launch talks on a new peace plan.

Hamas officials identified Al-Beack, 30, as a former assistant to the commander of the Hamas military wing, Salah Shehadeh, who was killed last year when Israeli troops dropped a bomb on his home. Al-Beack was responsible for securing and hiding militants, Hamas officials said.

The Israeli army, which confirmed the missile strike, said al-Beack was responsible for 16 attacks in which 19 Israelis were killed.

Hamas activists gathered around the mangled wreckage of al-Beack's Fiat as smoke billowed from the twisted metal. The strike happened in the afternoon when children and government workers were heading home from school and work.

"One missile hit the car from the front and the other from behind," said witness Imad Mouhmmed. "There were pieces of human flesh flying into the air."

The army said al-Beack had links to al Qaeda and was planning more attacks against Israelis.

Israel has killed dozens of suspected Palestinian militants in targeted attacks in the past 31 months of fighting. Hamas is responsible for dozens of suicide bombings in which hundreds of Israelis have been killed or wounded.

"The new crime will have severe reprisals."

Powell was to arrive in the region late Saturday and meet separately with Israeli Prime Minister Ariel Sharon and Palestinian Prime Minister Mahmoud Abbas on Sunday, Israeli and Palestinian officials said. The talks are to be a first step toward implementing the so-called "road map" to peace, which envisions a Palestinian state within three years.

After Powell's talks, a U.S. State Department team was to remain in the region to oversee implementation of the road map, said Palestinian Foreign Minister Nabil Shaath and a senior Israeli political official who spoke on condition of anonymity.

A source from the so-called Quartet of nations that drafted the road map told The Associated Press last week that an American "facilitator" would stay in the region to monitor and mediate implementation of the plan.

Shaath identified that facilitator on Thursday as David Satterfield — a senior U.S. State Department official who has mediated contacts between Israel and the Palestinians in the past.

Shaath said that Satterfield will remain in the region for at least two weeks, after which U.S. Mideast envoy Richard W. Erdman will take over. Erdman, who has been involved in past Mideast peacemaking efforts, will monitor implementation for more than a month, Shaath said.

The blueprint for peace was drafted last year by the United States, the United Nations, the European Union and Russia.

The three-phase road map calls for an end to violence and a freeze on Jewish settlement activities in the first stage, the formation of a Palestinian state with temporary borders in the second phase and a permanent state by 2005.

In other developments Thursday, two Palestinian men were killed and a teenage boy was wounded, all apparently by Israeli troops, in separate incidents in the West Bank and Gaza Strip.

The Israeli Army said it shot a Palestinian man near a Jewish settlement in Gaza before dawn. He was not immediately identified. Palestinian Zahir Sholi, 40, was shot and killed by Israeli troops while transporting goods on his donkey north of Nablus, witnesses said. A 16-year-old boy was shot in the abdomen and legs by Israeli troops at the Balata refugee camp outside of Nablus when soldiers returned fire at stone throwers, hospital officials said. The army said it was checking on both reports.

Also Thursday, hundreds of Palestinians gathered at the Khan Younis refugee camp in the southern Gaza Strip on Thursday for the funeral of a 1-year-old boy killed by gunfire the day before. Witnesses said the baby was hit by Israeli gunfire.

Army spokesman Jacob Dalal said soldiers at an outpost guarding Israeli settlements had come under fire from Palestinians and returned fire. Dalal could not independently confirm the baby's death.

Meanwhile, an autopsy by Israel's national forensic institute revealed Thursday that a prize-winning British filmmaker shot and killed last Friday night in the Gaza Strip was hit from the front, an institute spokeswoman said.

The findings indicate that James Miller, 34, was likely killed by Israeli soldiers. On Sunday, the army said that Miller had been shot from behind, raising the possibility that he could have been hit by Palestinian gunmen. The army did not immediately comment Thursday on the autopsy report.