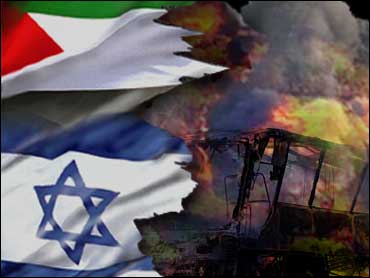 The Israeli army says it has killed one of the gunmen.

Earlier, the army said it had captured a would-be suicide bomber armed with an 11-pound explosive belt, who infiltrated Israel from the Gaza Strip and planned to attack Tel Aviv.

The violence comes as U.S. Secretary of State Condoleezza Rice left the region after a three-day visit aimed at shoring up a fragile truce. Israel and the Palestinians declared an end to the more-than four years of fighting in February, but after a period of relative calm violence has flared over the last two weeks.

The two dead Israelis were a husband and wife, the army said.

Three of the wounded were in a serious condition and were being airlifted to hospital in the nearby Israeli city of Beersheeba. The fourth person was lightly wounded.

The army said troops in the area then clashed with the gunmen and were carrying out searches. Settlers said one of the Palestinian gunmen was shot dead by soldiers, but the military could not confirm this.

Three Palestinian groups jointly claimed responsibility for the attack, which they called a "martyrdom operation."

In a phone call to The Associated Press, a spokesman for the Islamic Jihad said the attack was carried out by a member of his group, together with gunmen from the Al Aqsa Martyrs' Brigades and a group calling itself the Popular Resistance Committee.

"A group of our self-sacrifice martyrs ... attacked an Israeli convoy of settlers and the army, causing many casualties," said the Islamic Jihad spokesman, identifying himself only by his nom de guerre, Abu Abdullah. Militants conceal their identities fearing Israel which has targeted dozens of militant leaders.

Israel said the captured would-be bomber, identified as Jihad Shahada, 18, was also an Al Aqsa member. Shahada told police interrogators he planned to blow himself up in the Tel Aviv area, the army said.

However, an Al Aqsa spokesman denied the youth was a member of his organization.

The involvement of Al Aqsa members in violence is a blow to Abbas who has led efforts to end attacks on Israelis in the run up to Israel's planned withdrawal from the Gaza Strip next month.

On Saturday Abbas won praise from Rice for his efforts to clamp down on militant groups after Palestinian police twice clashed with militants in recent days. The clashes came as Israel massed thousands of troops on the Gaza border, threatening to invade unless the Palestinians stopped militants from firing rockets and mortars at Jewish settlements and nearby Israeli towns.

"These efforts demonstrate the Palestinian leadership's commitment to ensuring security and tracking down those that perpetrate violent attacks that only delay the achievement of a Palestinian state," Rice said after a meeting with Abbas.

She called on him to continue these efforts. "There is much work to be done," she said.

During her visit Rice met separately with Israeli and Palestinian leaders over three days — the third time that has happened since she took over at the State Department in January.

Rice came to the region in a hastily arranged trip to try and rescue the shaky Mideast truce amid an escalation of violence, determined that Israel's withdrawal from the Gaza Strip go ahead as planned.

However, Rice won no new commitments during the fresh round of shuttle diplomacy.

"There are discussions, meetings, going on between the two sides and I think they're making some progress," Rice said after lengthy meetings Saturday with Palestinian leaders.