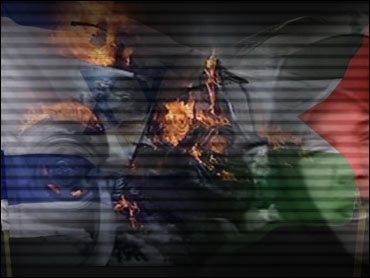 An Israeli attack helicopter fired a missile early Tuesday at a group of armed Palestinians in a Gaza refugee camp, killing two and wounding at least 17, residents and doctors said.

Residents who saw the Khan Younis refugee camp violence said the gunmen targeted by the helicopter fired two missiles at Israeli tanks before the helicopter struck. Residents said the dead Palestinian was a 25-year-old gunman.

As the attack occurred, the Israeli military was carrying out operations in two parts of the camp. Tanks and bulldozers leveled land and tore down buildings across from a Jewish settlement.

The Israeli operations came a day after Palestinian gunmen opened fire on an Israeli vehicle on a nearby road, killing a pregnant settler and her four young daughters.

The Israeli military refused to comment on the latest violence. Hours earlier, Israeli Prime Minister Ariel Sharon pledged to come up with a new plan to replace "unilateral disengagement" from Gaza, voted down by his own party.

Despite a strong endorsement from President Bush, Sharon was unable to sell his Gaza withdrawal plan to his own party, reports CBS News Correspondent Robert Berger. Voters couldn't come to terms with dismantling 21 Gaza settlements.

Doctors at Khan Younis hospital said some of the wounded lost limbs.

In the move on Arafat's offices, witnesses said Israeli military vehicles surrounded the complex and soldiers took over buildings across from the compound. There were no reports of gunfire.

Israeli military officials said soldiers were arresting suspects, but the operation was not linked to Arafat's office.

Arafat has been confined to the Ramallah building for more than two years. Israel has said he is free to leave but might not be allowed to return.

Recently Israeli Prime Minister Ariel Sharon said he considered himself freed of a commitment he made to President Bush not to harm Arafat. The U.S. administration replied that Sharon was still bound by his pledge.

Both countries charge that Arafat is tainted with terrorism. Last September, Israel's Cabinet declared that Arafat should be "removed."