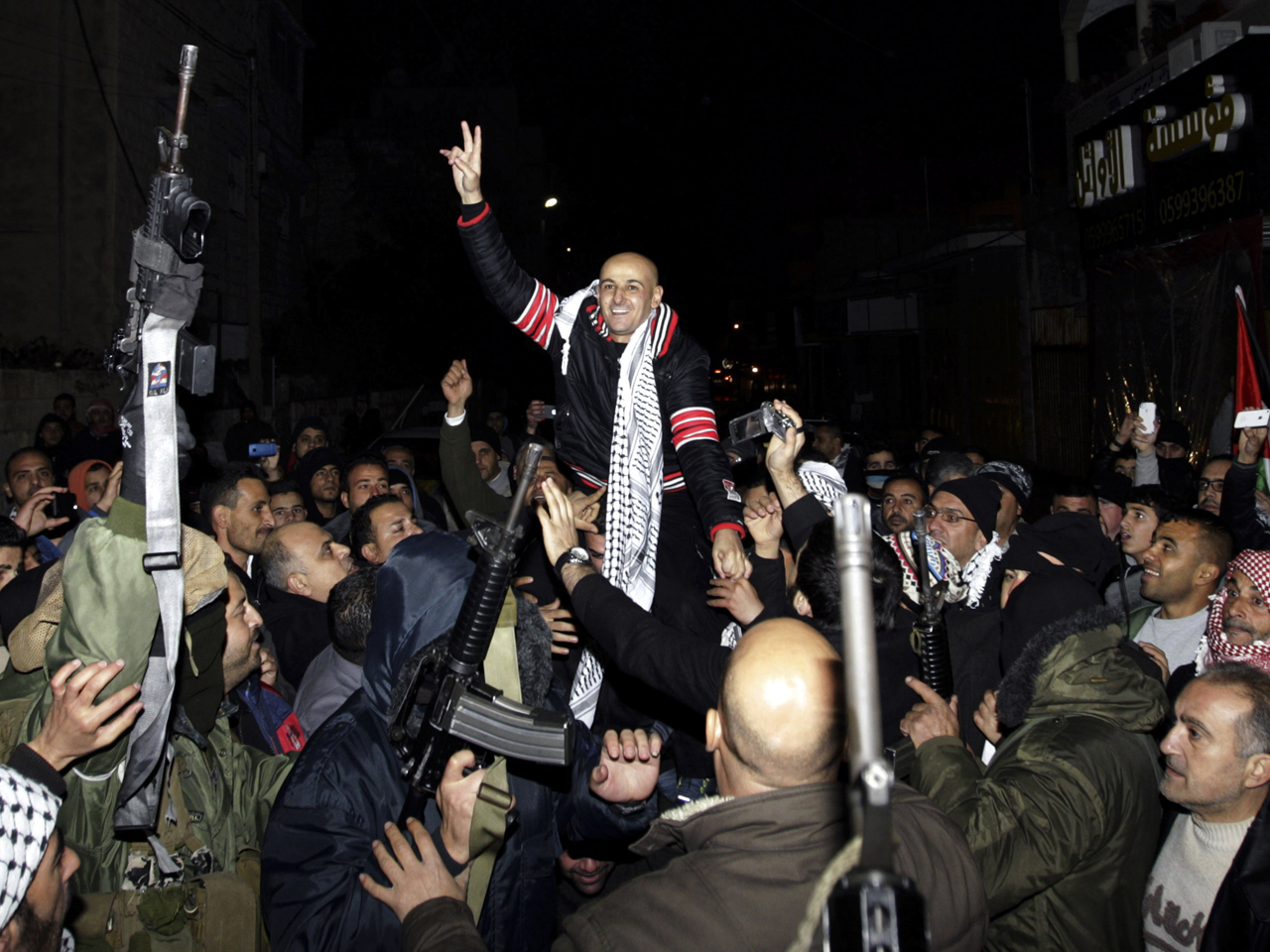 After departing on buses from Israeli jails overnight, the prisoners received hero's welcomes upon their return to the West Bank and Gaza, with officials and jubilant relatives lining up to greet them.

At his headquarters in Ramallah, Palestinian President Mahmoud Abbas waited to meet the men in the middle of the night. Speaking before thousands, he pledged to continue pressing for the release of long-serving and ill prisoners.

"We will not sign a final peace deal with Israel before all the prisoners are released," he said.

In Israel, though, the release was accompanied by great anger and frustration with Prime Minister Benjamin Netanyahu, who is facing a public uproar from all directions over the move.

With Netanyahu expected to accompany the releases with plans to build hundreds of new homes in Jewish settlements, the criticism came from some unlikely quarters.

Dovish supporters of peace talks said the expected construction would destroy any goodwill created by the prisoner release, while hard-line allies criticized Netanyahu for linking the Jewish settlement cause with the release of prisoners convicted in connection with killings, mostly of Israelis.

"Leadership is judged by the ability to implement decisions, difficult as they may be," Netanyahu told members of his Likud Party on Monday. "We were not elected to make easy decisions."

Israeli opponents of the prisoner release have staged days of protests. A group representing the families appealed to the Supreme Court to block the release. It was rejected late Monday, allowing the releases to continue.

Israeli police say suspected Jewish vandals set fire to three vehicles in a West Bank village early Tuesday and sprayed threatening graffiti referencing U.S. Secretary of State John Kerry ahead of his expected visit to the region this week to try again to breathe life into the negotiations.

During the visit, the State Department said Monday, Kerry will present Israel and the Palestinians the broad outlines of what a final Mideast peace agreement could look like.

Rosenfeld says the vandals then fled the Palestinian village of Jilazoun. He says police are investigating.

Under a formula drawn up by Kerry, Israel agreed last summer to release a total of 104 long-serving Palestinian prisoners in order to restart peace talks with the Palestinians.

In exchange, the Palestinians dropped their longstanding demand for Israel to halt construction of homes in the West Bank and east Jerusalem, areas captured by Israel in 1967 that they claim for their future state. The Palestinians say they have received vague assurances that Israel would show restraint while the talks continue until an April target date for an agreement.

The latest prisoner release was the third of four planned stages. The release was carried out by Israel overnight to avoid the larger spectacle of having to witness the celebrations over the killers' freedom.

All 26 of the men have been convicted in deadly attacks, and have spent between 19 and 28 years in prison. They included 18 men from the West Bank, three Gazans, and in a concession by Israel, five men from east Jerusalem.

Israel considers east Jerusalem to be part of its capital and has previously balked at allowing the Palestinians to negotiate on behalf of prisoners living in what it considers to be Israeli territory. Israel's annexation of east Jerusalem is not internationally recognized, and the vast majority of Arab residents in the area hold residency rights but are not Israeli citizens.

The releases generated excitement throughout Palestinian society, where prisoners held by Israel are revered as heroes and freedom fighters. Families decorated their homes and neighborhoods with posters of their loved ones who were returning home and planned large feasts.

In an apparent attempt to blunt domestic criticism of such releases, Netanyahu is expected to approve plans to build 1,400 new homes in both the West Bank and east Jerusalem in the coming days.

The Palestinians say such construction undermines peace efforts, and have appealed to the U.S. to block the expected announcement. The U.S. and the European Union have harshly criticized settlement announcements during the current round of negotiations, with Kerry at one point questioning Israel's commitment to peace.

But Netanyahu indicated he would not back down. "In these negotiations we are faced with our essential interests, including guaranteeing the settlements in the land of Israel," he said.

11 children among 29 killed in stampede at religious ceremony