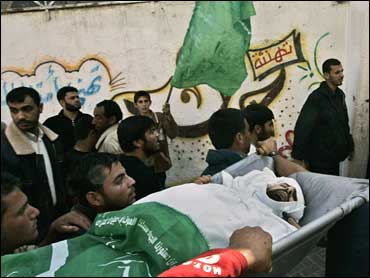 Israel's army has completed plans for a large offensive in the Gaza Strip and is only waiting for government approval for the action, the military chief said Wednesday, shortly after two Palestinian militants were killed by Israeli tank fire in the coastal area.

Lt. Gen. Gabi Ashkenazi said that until he receives the go-ahead for a broad operation, Israel will continue with its policy of air strikes and brief ground incursions to halt Palestinian rocket attacks.

"If it is necessary, we are prepared for the possibility of action," Ashkenazi told Army Radio. "Until then I think it is our duty to exhaust all other avenues and to operate every day and night in order to provide security."

Israeli Defense Minister Ehud Barak has repeatedly said that the time for a widespread ground invasion of Gaza is drawing closer. But as recently as Tuesday, he said it was not yet necessary to launch a broad operation, which would likely result in heavy casualties to Israeli soldiers and Palestinian civilians in Gaza's crowded urban landscape.

On Wednesday, Israeli tanks fired shells toward a group of Hamas militants on the outskirts of the town of Beit Lahiya in the northern Gaza Strip after dawn, Palestinian doctors and residents said. Two of the Palestinians were killed and four wounded, one critically, the doctors said.

The army confirmed the strike, saying the militants were preparing to fire mortar shells toward southern Israel.

The attack brings to about 30 the number of militants that Israel has killed in the past 10 days.

Despite frequent cross-border attacks and air strikes on Gaza militants, the Israeli army has been unable to stop the rocket fire from the Hamas-controlled territory.

This year, Gazan militants have fired 2,000 rockets and mortars, the army said. The rockets have killed a total of 12 people in recent years and cause widespread panic in southern Israeli border towns.

Israel blames Hamas, the Islamic militant group that controls Gaza, for allowing the attacks, even though the group has not been directly involved in most of the rocket launchings.

In addition to military action, Israel has sealed Gaza's borders since Hamas took control of the territory last June, allowing only food and humanitarian supplies into the area. Israel considers Hamas, which has killed more than 200 Israelis in suicide bombings, a terrorist group and refuses to have contact with it.

Following Hamas' takeover of Gaza, Palestinian President Mahmoud Abbas fired the Islamic group from the government and installed a rival Western-backed administration in the West Bank. Israel formally launched peace talks with Abbas at a summit in the U.S. last week.

The White House announced Tuesday that President Bush will visit the Middle East in early January as he presses the Israelis and Palestinians to push forward with talks meant to lead to the establishment of a Palestinian state. Israeli media reported that the visit would include a stop in Israel. U.S. diplomats could not confirm or deny the reports.

In a move that could hamper the U.S. peace push, Israel on Tuesday announced plans to build more than 300 new homes in a disputed east Jerusalem neighborhood. Palestinians warned that the move will undermine the newly revived peace talks.

The new housing would expand Har Homa, a Jewish neighborhood of about 4,000 residents in an area Palestinians claim as capital of a future state. Palestinian officials appealed to the U.S. to block the project.

The announcement focused attention on one of the most difficult issues facing Israeli and Palestinian negotiators in peace talks that are supposed to resume this month - the future of Jerusalem.

Israeli Prime Minister Ehud Olmert has indicated willingness to withdraw from some Arab neighborhoods of east Jerusalem, which Israel annexed after the 1967 Mideast war. But in principle, he backs the long-standing Israeli policy that the whole city is the capital of Israel.

Palestinians object to Israeli construction in east Jerusalem, pointing to the internationally backed "road map" peace plan, which is the basis of renewed negotiations agreed on at the Mideast summit.

According to the plan, Israel is supposed to cease all settlement construction. Israel says the roadmap stipulations about further development apply to the West Bank, not Jerusalem. The dispute casts further doubt on the U.S. goal of a final peace agreement by the end of next year, reports CBS News correspondent Robert Berger.

Meanwhile, it has emerged that Abbas will ask the international community this week to nearly double aid through 2010, for a total of $5.8 billion.

Abbas says he needs help with a huge deficit run up in years of strife, but also is promising to curb spending and spark economic growth.

The Abbas government's 2008-2010 development plan, obtained by The Associated Press, will be given to officials from donor countries in Paris on Friday, ahead of a high-level donor meeting there on Dec. 17.

Seventy percent of the aid is to go for budget support, including $120 million a month to pay wages for the bloated public sector, and 30 percent is to be spent on development projects.

The Paris conference is meant to build on the momentum from last week's Mideast conference in Annapolis, Md., in which Abbas and Israeli Prime Minister Ehud Olmert pledged to resume peace talks and aim for a deal by the end of 2008.

However, the Palestinians are submitting a steep aid request at a time of considerable "donor fatigue."

Since the mid-1990s, the international community - led by Europe - has sent billions of dollars to the Palestinian territories to support peace efforts, but gains were largely wiped out in Israeli-Palestinian fighting. Critics also charge that large sums were siphoned off by corrupt officials in previous regimes.