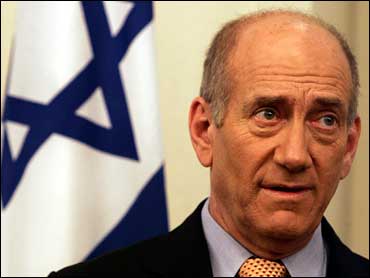 A Housing Ministry spokesman said 307 units would be built in Har Homa, a Jewish neighborhood in east Jerusalem.

Israel captured the eastern part of the city in the 1967 Mideast war and annexed the area. The Palestinians claim east Jerusalem as the capital of a future state.

Palestinian negotiator Saeb Erekat said he sent an urgent message to Secretary of State Condoleezza Rice, asking her to block the project from moving forward.

"This is undermining Annapolis," he said, referring to the U.S.-hosted summit, where Israel and the Palestinians relaunched peace talks.

The two sides agreed to base their peace talks on the U.S.-backed "road map," a peace plan that calls on Israel to halt all settlement construction.

The Palestinians consider any construction in the West Bank and east Jerusalem to be settlement activity. Israel says the settlement freeze does not apply to Jerusalem.

"Israel makes a clear distinction between the West Bank and Jerusalem," said Mark Regev, spokesman for Prime Minister Ehud Olmert. "Israel has never made a commitment to limit our sovereignty in Jerusalem. Implementation of the first phase of the road map does not apply to Jerusalem."

Meanwhile, Israel's defense minister said it is time to "kill those who carry out attacks" against Israelis, but said he was holding off on a widescale invasion of the Gaza Strip for now.

In a rare interview, Defense Minister Ehud Barak also rejected calls from some members of his Labor Party to talk to Gaza's Islamic Hamas rulers, telling Army Radio that Israeli troops had killed 27 Gaza militants in the past 10 days and would continue to aggressively chase down those operating under Hamas' watch.

"I do not agree with the assessment that the time has come to talk to the Hamas. Now is the time to kill those who carry out attacks and those firing Qassams (rockets) and mortars," Barak said.