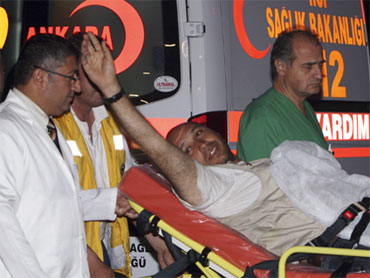 Israel on Thursday rejected calls from the United Nations and others for an international investigation of its deadly raid on a Gaza-bound aid flotilla but left the door open to foreign involvement.

Israel says the commandos used force, killing nine people, only after activists attacked them with knives, crowbars and clubs, as well as two pistols grabbed from raiders. Activists who had set sail for Gaza with tons of aid, hoping to break Israel's 3-year-old blockade of Gaza, say Israeli commandos fired first.

Officials have insisted Israel's military already is investigating the raid and the country is capable of conducting a credible review.

"It is our standard practice after military operations, especially operations in which there have been fatalities, to conduct a prompt, professional, transparent and objective investigation in accordance with the highest international standards," government spokesman Mark Regev said.

Another official in the prime minister's office said there would be no separate international investigation. He spoke on condition of anonymity pending an official decision.

He told the Ynet news website that he has proposed setting up a commission of inquiry, headed by a respected former Israeli Supreme Court judge. "If they'll ask to include foreign observers, we'll include them," Lieberman said.

A junior Cabinet member, Binyamin Ben-Eliezer, went even further, saying, "an international commission of inquiry must be established because we have nothing to hide.

An inner Cabinet of ministers with security responsibilities must convene to discuss the matter.

Israel has refused to cooperate with previous international probes, most recently the U.N. investigation into Israel's 2009 war in the Gaza Strip that concluded that both the Israelis and Hamas militants, who control Gaza, committed war crimes.

Israel says the commission that ordered the probe has a record of anti-Israel conduct, and has rejected the investigation as fundamentally flawed.

The international outrage over the deaths on board the flotilla's lead ship, the Mavi Marmara, has sparked a wave of protests across the diplomatic world and condemnations by a sheaf of countries. South Africa became the latest country to recall its ambassador to Israel, although it stressed it has no intention of expelling the Israeli ambassador or cutting diplomatic ties with the Jewish state.

The raid has also provoked multiple demands for an international probe, and on Wednesday, U.N. chief Ban Ki-moon indicated he was headed in that direction.

In a strongly worded statement, the Arab League called the raid "state piracy and terrorism" and said it threatened regional stability and security. Arab foreign ministers also urged the U.N. Security Council to force Israel to lift the blockade.

Earlier this week, the 15-nation U.N Security Council called for a "prompt, impartial, credible and transparent investigation conforming to international standards" but stopped short of calling for an independent international investigation.

The U.S., as a member of the council, supported that statement. Washington's special Mideast envoy, who is in the region to mediate another round of indirect talks between Israelis and Palestinians, said the raid "underscores the need to make progress in negotiations to lead to a two-state solution."

"The tragedy of last week can not be allowed to spiral out of control and undermine the limited but real progress that has been made," envoy George Mitchell said Thursday at an investment conference in the West Bank city of Bethlehem.

Meanwhile, Turkish news agency Anatolia reported Thursday that one of the nine people killed in the raid on the ship was an American citizen born in Turkey. U.S. officials at the State Department could not immediately confirm or deny the report.

The activists on the flotilla want to end Israel's blockade of the Gaza Strip, imposed after the militant Hamas group violently seized power in the territory three years ago. Israel says the blockade is meant to keep weapons out of Gaza and to put pressure on its Hamas rulers to moderate. But weapons and other goods continue to reach Gaza through underground tunnels with Egypt and Gazans blame Israel, not Hamas, for their hardship.

CBS News correspondent Richard Roth reports there's another challenge on the horizon for Netanyahu and Israel; the MV Rachel Corrie, a cargo ship named for an American killed in the Gaza Strip seven years ago.

The ship left Ireland earlier this week and is headed for the Gazan coast. Israel's promising she won't sail in.

"This was not the 'Love Boat,"' Netanyahu said in an address to the nation. "It was a hate boat."