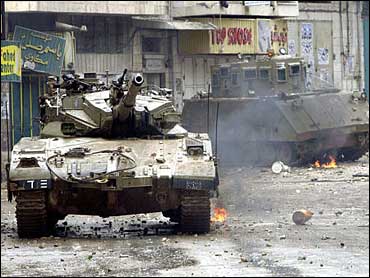 Israeli soldiers shot dead a Palestinian in a West Bank town and carried out house-to-house searches in another Thursday. Troops also divided the Gaza Strip into three parts, restricting the movement of more than 1 million Palestinians.

CBS News Correspondent Robert Berger reports Israel is keeping up the pressure in the West Bank and Gaza Strip against the militant Islamic group Hamas, which killed four soldiers in an attack on a tank Saturday in Gaza, and also in response to a Palestinian rocket attack Wednesday on an Israeli town.

Despite the latest surge in violence, Israelis and Palestinians have been holding increased contacts on the possibility of a cease-fire, though no breakthroughs have been achieved.

In London, William Burns, a U.S. State Department official, met Palestinian Cabinet ministers on Wednesday to discuss a U.S.-backed peace plan that envisions the creation of a Palestinian state in about three years.

However, an Israeli newspaper reported Thursday that Israel wants more than 100 changes made to a U.S.-backed peace plan, including erasing a key element — a timetable for moving to Palestinian statehood by 2005.

An Israeli official, speaking on condition of anonymity, confirmed that professional teams are working on a revised version of the so-called "road map," but government officials gave conflicting assessments on the accuracy of Thursday's report in the Haaretz daily.

The three-stage peace plan was put together by the so-called Quartet of Mideast mediators — the United States, the European Union, the United Nations and Russia.

In an initial cease-fire phase, Palestinians would carry out government reforms and crack down on militants, while Israel would withdraw from Palestinian towns. In stage two, Israel would recognize a Palestinian state in temporary borders by the end of 2003, and in the last period, negotiations on full statehood would begin.

Israel objects to a timetable, saying moving from stage to stage must depend on whether the Palestinians meet their commitments. The Palestinians say the timetable is at the core of the plan, and accuse Israel of trying to evade its obligations, including a freeze in settlement construction.

Burns told the Palestinians that formal discussions on the plan would not resume until after Israel forms a new government — a process that could take several more weeks — and would also depend on developments in Iraq, said Palestinian Cabinet minister Saeb Erekat, one of the participants.

The Palestinians asked the United States to send international monitors in the meantime to protect Palestinian civilians during Israeli military offensives, but Burns said Washington did not support such an idea.

In the West Bank, Israeli soldiers entered Tulkarem early Thursday in an apparent search for militants and killed a 24-year-old Palestinian. The army said the man was armed, but Palestinians said he was an unarmed Hamas supporter who happened to be standing near the Palestinian wanted by Israel.

In Nablus, the largest West Bank city, Israeli soldiers went door-to-door through the narrow streets of the Old City looking for suspects. Soldiers on loudspeakers called on Palestinian residents to hand over wanted men.

The troops used explosive charges to blow the locks off shops in the Old City, and one workshop that made gold jewelry was destroyed. The shops use chemicals, including acids, that can also be used in bombmaking, and the soldiers have torn the structures down in previous raids.

Dozens of Palestinians were arrested and taken to two Nablus schools that the soldiers have commandeered, Palestinians said.

In the Gaza Strip, the scene of most of the recent violence, Israeli soldiers blocked Gaza's main north-south road, carving the territory into three parts.

The army said its operation in the Gaza Strip was in response to Palestinian rockets fired from northern Gaza at the Israeli town of Sderot on Wednesday. One Israeli was injured.

Since the attack on the Israeli tank Saturday, 29 Palestinians have been killed, including at least eight Hamas members.