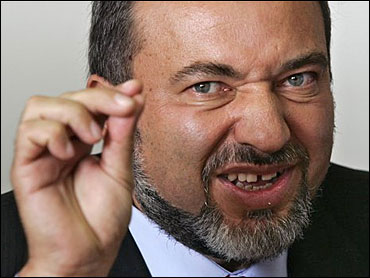 The Israeli Cabinet agreed Monday to bring a hawkish, divisive politician into the government — a decision that shored up the shaky coalition but effectively ruled out any serious moves to revive Middle East peace negotiations.

Prime Minister Ehud Olmert insisted the addition of Avigdor Lieberman and his Yisrael Beiteinu party, which advocates redrawing Israel's borders to exclude many of its Arab citizens, would not force any major change in government policy.

Palestinians, Arab Israelis and some analysts sharply criticized the decision, comparing it to the inclusion of Joerg Haider and his far-right Freedom Party in the Austrian government in 2000, a move that prompted Israel to pull its ambassador from Vienna.

CBS News correspondent Robert Berger reports Lieberman has some controversial views. In 2002, he called for the bombing of Palestinian gas stations, banks and commercial centers in response to suicide bombings.

Nabil Shaath, an adviser to Palestinian President Mahmoud Abbas, called Lieberman's entry into the government an "ugly message and ugly symbol of the direction this Israeli government is taking."

The decision was a major shift for Olmert's government — coming just seven months after his Kadima Party won elections on a platform calling for Israel to unilaterally pull out of much of the West Bank while strengthening its hold on major Jewish settlement blocs there.

Lieberman, a blunt former Cabinet minister, strongly opposed Olmert's proposal, instead calling for trading Arab towns inside Israel for Jewish settlements in the West Bank, which would effectively strip Israeli Arabs of citizenship by shifting them to a Palestinian state.

After Israel's inconclusive Lebanon war this summer, the government's popularity plummeted, weakening the coalition and forcing Olmert to abandon his withdrawal plan. That cleared the way for Lieberman to join the government.

The Cabinet voted 22-1 Monday to bring Yisrael Beiteinu into the government. Later Monday, parliament endorsed the move by a vote of 61-38, and Lieberman took his oath of office.

With Yisrael Beiteinu's 11 lawmakers on board, Olmert's government will control a strong majority in parliament — 78 of the 120 seats. Lieberman will assume the post of deputy prime minister in charge of "strategic threats," primarily how to deal with Iran's nuclear ambitions.

Olmert said Lieberman's inclusion in the government would not cause any policy changes.

"I think it is important that we act in the diplomatic arena," Olmert told lawmakers in his Kadima Party. "This includes the Palestinian issue first and foremost."

Peace moves with the Palestinians have been frozen for years, and relations plummeted after Hamas militants who call for Israel's destruction won Palestinian parliamentary elections last January and formed a government.

Though both Olmert and Abbas, a moderate from the Fatah Party, have called for a summit, new peace initiatives are not expected, and Lieberman's appointment confirmed that, political analyst Yossi Alpher said.

"There is no Palestinian agenda (of the Israeli government) that is jeopardized by Lieberman," Alpher said.

Lieberman, 48, became a national figure a decade ago as a top aide to then-Prime Minister Benjamin Netanyahu. A powerful behind-the-scenes mover, he became widely feared for his strong-arm tactics.

A former bar bouncer who immigrated to Israel from the Soviet republic of Moldova in 1978, Lieberman has become a potent political force, popular in Israel's large community of immigrants from the former Soviet Union.

But his comments about Arabs have made him a divisive figure.

At the height of fighting with Palestinians in 2002, Lieberman, then a Cabinet minister, called for the bombing of Palestinian gas stations, banks and commercial centers. He has also urged executions for Israeli Arab lawmakers who met with Hamas leaders.

Olmert's main coalition partner, the dovish Labor Party, decided to remain in the government, concluding it could serve as a counterweight to Lieberman.

But one Labor minister, Ophir Pines-Paz, cast the lone vote of dissent against Yisrael Beiteinu and then resigned his Cabinet post in disgust, calling Lieberman a "moral stain" on the government and accusing his party of having "racist aspects."

Ahmed Tibi, an Arab Israeli lawmaker, said Lieberman is "Israel's No. 1 fascist" and his inclusion in the government will alienate Israel's Arab community.

Alpher, the political analyst, said that putting Lieberman in charge of Israel's response to Iran — the most serious security threat facing the Jewish state — is deeply worrying.

"Judging by his statements over the years, he is an irresponsible demagogue when it comes to issues of security for Israel," Alpher said.