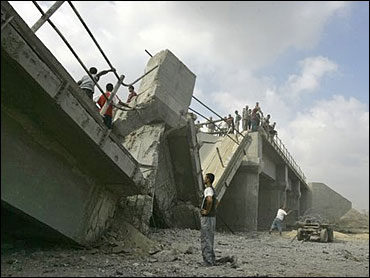 Palestinians dug in behind walls and embankments in the southern Gaza Strip on Wednesday, bracing for a major assault after Israel sent in troops and tanks and bombarded bridges and a power station to pressure militants to release a captured soldier.

No casualties were reported.

It was Israel's first ground offensive since it pulled all of its soldiers and settlers out of Gaza last summer, and Palestinians, holed up at home, were bracing for a major strike. Israeli Prime Minister Ehud Olmert said Israel wouldn't balk at "extreme action" to bring the soldier home, but had no intention of reoccupying Gaza.

Israel may have felt that a swift response was necessary, reports CBS News correspondent Robert Berger. If it had waited too long, it may have feared that it would appear weak and its threats of a crushing military response would have no credibility.

Palestinian President Mahmoud Abbas deplored the incursion as a "crime against humanity," and a leading Hamas politician issued a call to arms against the Israeli troops.

Israeli warplanes fired at least nine missiles at Gaza's only power station, cutting electricity to 65 percent of the Gaza Strip, engineers at the station said. The station's three functioning turbines and a gasoline reservoir were engulfed in flames, raising the specter of a humanitarian crisis in Gaza, where water pumps are powered by electricity.

The Israeli military said in a statement that three bridges were attacked "to impair the ability of the terrorists to transfer the kidnapped soldier," Cpl. Gilad Shalit, 19. Knocking down the bridges cut Gaza in two, Palestinian security officials said.

Witnesses reported heavy artillery shelling near the long-closed Gaza airport into a village east of Rafah, and warplanes also flew low over Gaza City, rocking the city with sonic booms and shattering windows.

Troops in Israel backed up the assault, firing artillery into Gaza.

"We won't hesitate to carry out extreme action to bring Gilad back to his family," Olmert said. "All the military activity that started overnight will continue in the coming days."

Olmert repeated that Israel will not negotiate Shalit's release with militant groups.

Shalit was taken captive on Sunday during a Palestinian attack on a military post in southern Israel.

"He is definitely in our sights ... he is a target," Ramon told Army Radio. "Khaled Mashaal, as someone who is overseeing, actually commanding the terror acts, is definitely a target."

Hamas militants and allied factions claimed responsibility for the attack on a southern military post on Sunday in which Shalit was captured and two soldiers were killed. The Palestinian government has called for the soldier's release, but Israel thinks the Syria-based leaders called the shots.

Abbas deplored the Israeli invasion in a statement.

"The president considers the aggression that targeted the civilian infrastructures to be collective punishment and a crime against humanity," the statement said. Abbas, it added, urged the U.S. and international Mideast negotiators to intervene to halt the operation.

Normally bustling streets in southern Gaza were eerily deserted midmorning, with people holed up inside their homes. A few children from nearby Bedouin encampments played in the streets, and two women in a donkey cart drove near the airport in Rafah.

The Rafah crossing between Gaza and Egypt — Gaza's main link to the outside world — has been closed since the attack Sunday in which the Israeli soldier was taken captive. Usually, there is some activity in the area, even when the passage is closed, but on Wednesday, it was empty.

A small grocery near the long-closed airport at Rafah was open, but no one was inside except the owner, 45-year-old Allah Abu Jazr.

"All options are open, but let's hope this crisis will pass," Abu Jazr said. "We want the soldier to return home, just as we want our prisoners to come home."

Masked militants from various armed factions took up defensive positions around Gaza City in the northern part of the strip. Militants said they fired a rocket early Wednesday at the Israeli village of Nahal Oz, the Israeli forces' staging area, and at other Israeli targets.

Capt. Jacob Dallal, a military spokesman, said the army was prepared for a long operation, if necessary.

"We have a vast variety of military options available to us and everything is on the table," he said. At the same time, Israel is keeping diplomatic channels open during the Gaza operation with the hope that contacts could win the soldier's release, Dallal said.

The militants who seized Shalit have demanded the release of hundreds of Palestinian women and children held in Israeli jails in exchange for information about the captured soldier.

Nizar Rayan, a leading Hamas political figure, urged fighters on the Hamas radio station to take up arms and fight the Israeli troops in "the battle of liberating the prisoners."

Rayan urged Palestinians not to give any information about the soldier "for free" and asked the Palestinians in the West Bank to also "revolt" against the invasion of Gaza.

"Defend your prisoners. Work hard until the 10,000 prisoners are free. Don't give any information," he said, referring to all Palestinian prisoners held by Israel.

Ahlan Firwana, the mother of a militant killed in an Israeli raid, was representative of Palestinian public opinion on Wednesday when she said she supported the release of the soldier — on condition that Palestinian prisoners held by Israel also be freed.

"I pray for him to return safely back to his family," said Firwana, who was part of a group of 30 women, all relatives of Palestinians in Israeli jails, that spoke to reporters in the southern Gaza town of Khan Younis. "I call on the mediators ... to focus on the exchange of prisoners. I don't want the dead body of my son. Our only demand is the freedom of the prisoners."

Trying to defuse building tensions, negotiators from the ruling Hamas movement said Tuesday they had accepted a document implicitly recognizing Israel. But two Syrian-based Hamas leaders, who hold great weight within the movement, denied a final deal had been reached.

Complicating matters was a new claim by the Hamas-linked Popular Resistance Committees, one of the three groups that carried out Sunday's assault, that it had also kidnapped a Jewish settler in the West Bank.

After Israel launched its Gaza assault, the PRC threatened to kill its hostage.