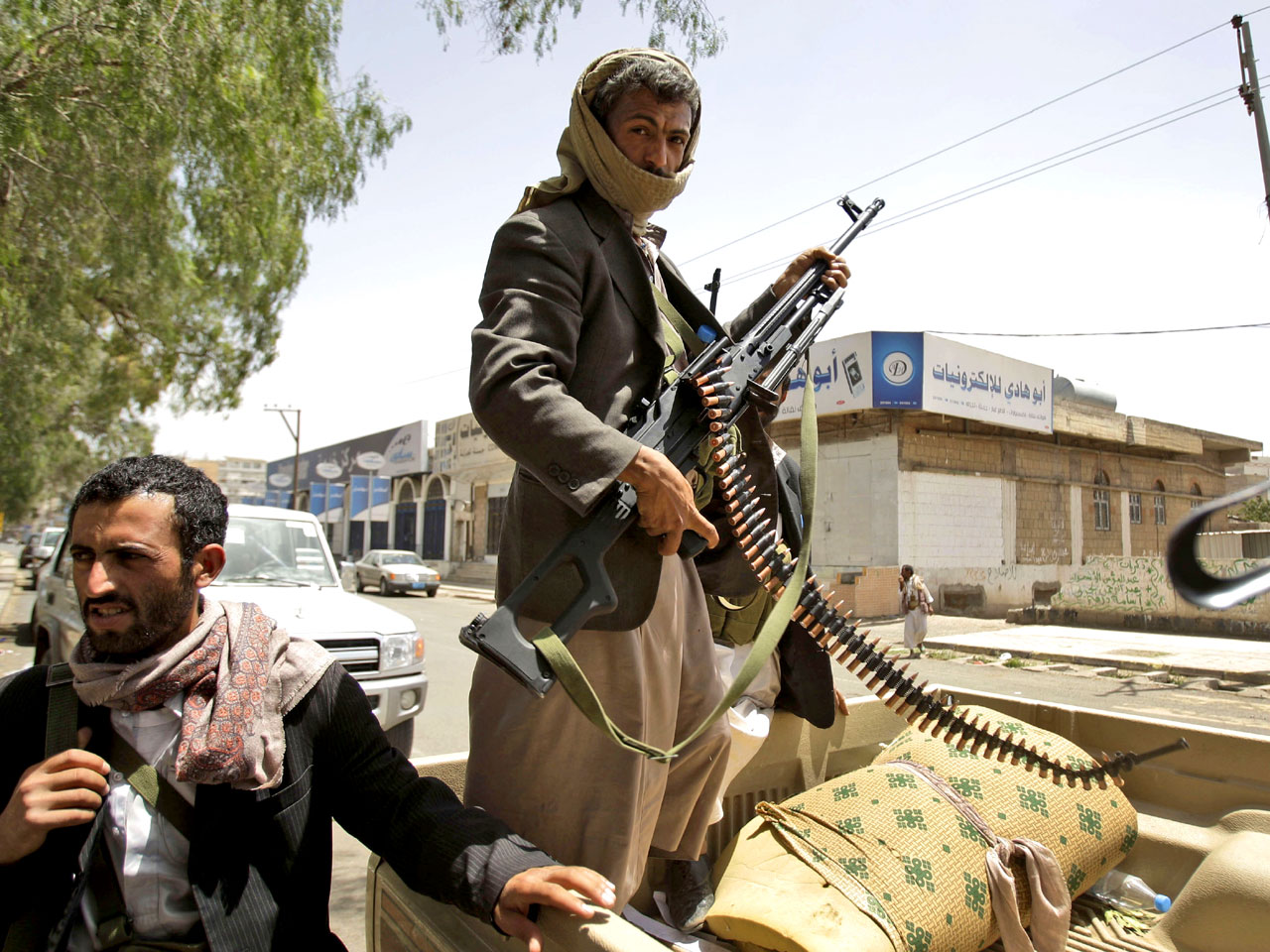 SANAA, Yemen — Hundreds of Islamic militants cemented control over a town in southern Yemen on Sunday, even seizing army tanks, military officials said, while breakaway army units encouraged other military forces to switch their loyalties and join the uprising.

The growing number of defections in the military posed the most serious threat yet to President Ali Abdullah Saleh's three-decade grip on his country.

A leader of the breakaway forces, Maj. Gen. Abdullah Ali Elewa, appealed to other units to join.

"Stand side by side with the courageous armed forces, Republican Guards and security officers who endorsed the peaceful popular youthful revolution and announced their support to stand up to the tyrants and corrupt, and unjust," he said.

Elewa, a former defense minister, was one of nine military officers who signed the statement, named "Statement Number One" in the style of a military regime, though the officers are not in power. The group included leaders of four of Yemen's five military divisions.

"We understand the demands of the youth revolution, but we ask them first to get rid of those corrupt, agent and traitor elements who defected from the military," Saleh said in a statement.

Late Sunday, several explosions were heard in the capital Sanaa. Their origin was not known.

Also, witnesses in the southern city of Taiz said security forces attacked protesters camped out in the central square with rifles and water cannon in an attempt to clear the area. Doctors said 150 people were taken to hospitals with injuries. In an earlier clash in Taiz, six protesters were killed, activists and doctors said.

Throughout the three months of protests against his 33-year rule, Saleh has repeatedly argued that the terror group would overrun the impoverished corner of the Arabian peninsula if he falls.

"He wants to ... confirm his false claims that if he gives up power, the homeland will be destroyed," Elewa said.

Hundreds of Islamic militants stormed Zinjibar, a small town of more than 20,000 people near the shores of the Gulf of Aden, on Friday, seizing a number of banks and government offices.

Other army units clashed with the militants around the town Sunday, shelling it from the outskirts and forcing terrified residents to flee or cower in their homes.

Medical and military officials said eight civilians and 18 soldiers have been killed since Saturday. Scores more have been injured.

Ali Dahmis, a political analyst in the town, said officials who supported Saleh fled early, making it easier for militants to stream in.

Col. Abdullah al-Badawi, who defected from Saleh's regime and led his men to fight the Islamists, claimed the militants were in fact supporters of Saleh.

"We will chase the mujahideen, the supporters of President Saleh, and will never allow them to have a foothold in Abyan," he said, referring to the province of which Zinjibar is the capital.

Elewa, said Saleh sought to spread fear "that Yemen without him will become another Somalia."

Saleh's political opponents and experts on Yemeni affairs discount such fears, though the estimated 300 fighters of al Qaeda in the Arabian Peninsula could exploit the growing turmoil to operate more freely in remote parts of the country.

Washington considers the group to be the biggest terrorist threat to the U.S. It has been linked to the December 2009 attempt to blow up a Detroit-bound airliner and the plot to put U.S.-addressed parcel bombs onto air cargo flights.

It is not clear if the militants who seized Zinjibar were linked to al Qaeda. Yemen is home to numerous other Islamic extremist groups.

Islamist militants also took over the nearby town of Jaar at the end of March, and there were similar accusations then that the government purposely stood aside.

The United States, which once considered Saleh a necessary ally in fighting Yemen's active al Qaeda branch, has turned its back on the ruler, calling for him to transfer power peacefully.

Saleh has clung to power despite daily protests, a wave of defections by army officers and political and tribal allies, and international condemnation of a crackdown that has killed more than 150 protesters.

Saleh has refused to sign a U.S.-backed proposal by Yemen's powerful Gulf Arab neighbors to step down in exchange for immunity from prosecution.

With diplomatic efforts stalled, the political crisis gave way to serious street battles last week between Saleh's forces and armed men loyal to the country's most powerful tribal leader, who has turned against the president.

The clashes killed 124 people and raised fears of a civil war before the two sides reached a cease-fire over the weekend. Armed tribesmen who had occupied government buildings began withdrawing Sunday in observance of the cease-fire

In another sign of Saleh's eroding support, a brigade of the powerful Republican Guard announced its defection to the opposition Sunday.

Activist Abdul-Rahman Ahmed said a letter from Brig. Gen. Ibrahim al-Jayfi, commander of the Guard's Ninth Brigade, was read to thousands of protesters in the provincial capital of Damar, 30 miles (48 kilometers) south of Sanaa.

The head of Yemen's most powerful tribal confederation has called on the Guard to help topple Saleh.

A larger crumbling of support within the Guard appeared unlikely because it is commanded by one of the president's sons.