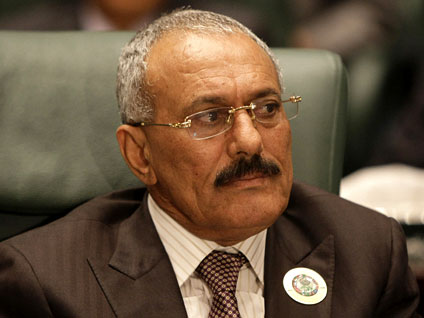 Length of rule: 32 years. President Ali Abdallah Saleh has been leading the current form of Yemen's republic since 1990, when Yemen took its modern shape after being divided in two since 1967. However, Saleh has been president of at least part of Yemen in its various forms since 1978, ruling unimpeded over a violent and hard-to-govern nation plagued by repeated secessionist movements.

Most despotic acts: Prior to the violent response to recent anti-government demonstrations, Yemen's state security forces had been accused of a long list of human rights violations, among the most prominent being: the recruitment of child soldiers; bombing and shelling civilian areas in various uprisings and anti-terrorism maneuvers; and frequent abductions, arbitrary arrests, beatings and torture of dissidents and journalists. While Saleh might be the man in charge, a 2006 report (PDF) commissioned by USAID suggests there is in Yemen "a system of grand corruption (that) has emerged over the last several decades thriving on the combination of weak state institutions and a fragmented elite structure." Saleh and his family are rumored to have benefited heartily from this system.

Outlook for change: (Last updated 5/19/2011) A popular uprising in Yemen against Saleh began shortly after Egypt's protests started earlier this year, and it has only grown since. Despite, or perhaps because of, his longtime rule and place as an important U.S. regional ally, Saleh has been plagued by mass defections from his government and army. He's even been abandoned by his own tribe in a country well-known for its tribal loyalties. In April, Saleh tried to strike a deal with protestors to step down in exchange for immunity, which they promptly rejected. That rejection has resulted in ongoing waves of violence between state security and demonstrators, in which many hundreds, perhaps thousands of people have been killed as of the writing of this report. The violence seems unlikely to ebb until Saleh, who has gone back and forth about his willingness to step down, finally leaves.