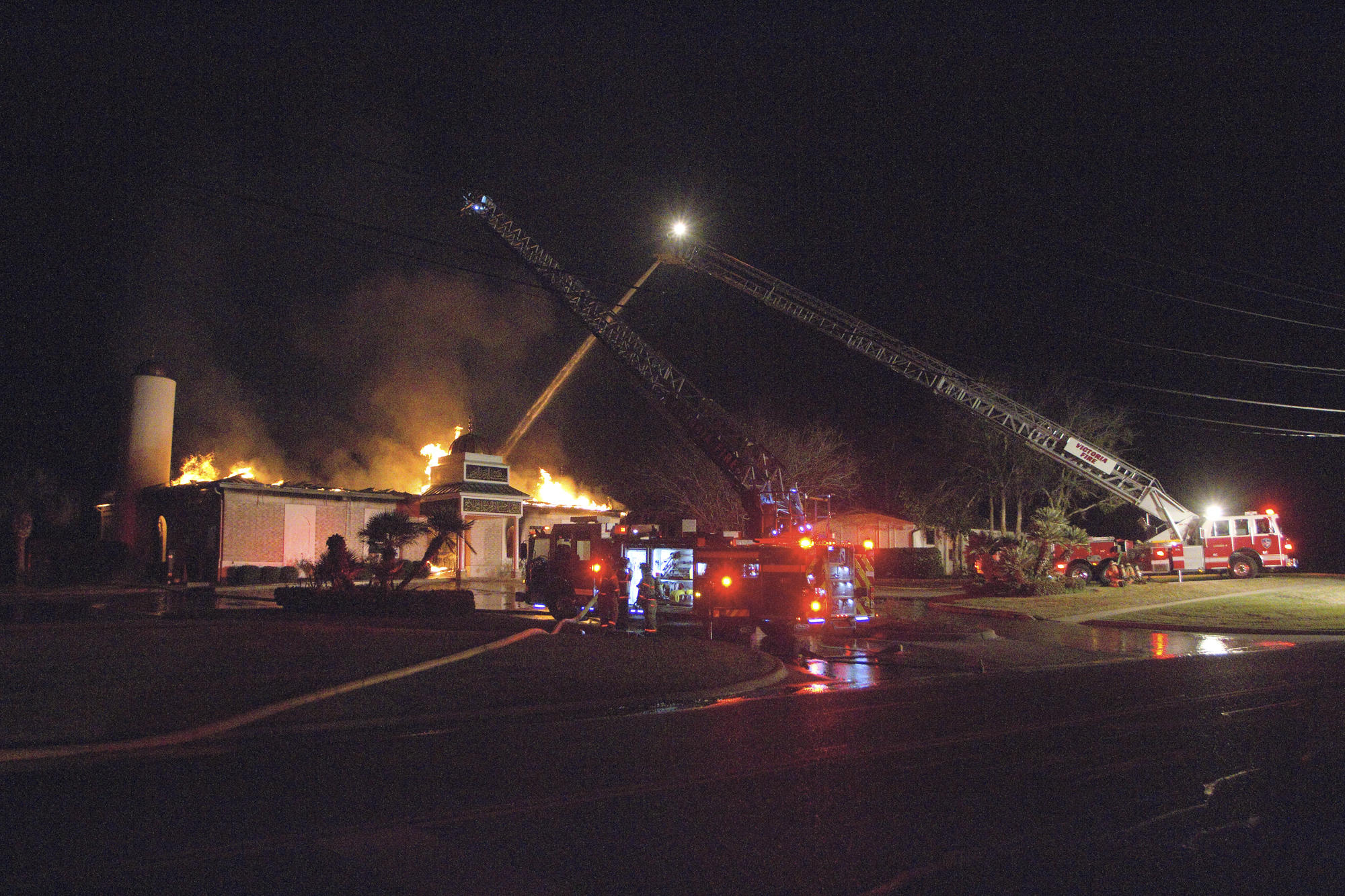 VICTORIA, Texas -- An early-morning fire Saturday destroyed a Texas mosque that was a target of hatred several years ago and experienced a burglary just a week ago.

A clerk at a convenience store spotted smoke and flames billowing from the Islamic Center of Victoria at around 2 a.m. and called the fire department.

“It’s sad to stand there and watch it collapse down, and the fire was so huge,” Shahid Hashmi, the Islamic center’s president, said. “It looks completely destroyed.”

Victoria Fire Marshal Tom Legler asked for help from the Texas Fire Marshal’s Office and federal Bureau of Alcohol, Tobacco, Firearms and Explosives to determine what caused the blaze. Hashmi said authorities have told him it was too early to speculate.

“None whatsoever right now,” the center director said. “We don’t have any lead or information as to what started the fire and what happened. So I’m sure it’s going to be a few days, they told us, before they can come up with any answers for us.”

The congregation’s pastor, known as an imam, was awake in the early morning hours and checked online surveillance of the mosque and found no alarm active and the doors unlocked, Hashmi said. On Jan. 21, someone broke in and stole some electronics, including laptops.

“He was worried about it and drove over there,” Hashmi said. “By that time, fire engines were already there pouring water on the fire.”

No injuries were reported. It took about four hours to extinguish the blaze.

Pictures posted on social media appeared to show the fire and its aftermath.

Hashmi, who’s lived in Victoria 32 years, said the congregation of about 140 has had few other problems and has enjoyed support from the city of about 115 miles southwest of Houston. He already has received offers of temporary quarters for the congregation to worship.

“When 9/11 happened, Muslims and non-Muslims, we all got together,” he said. “Of course, we will rebuild.”

A post on the Victoria Islamic Center Facebook page on Saturday said that there has been an outpouring of support.

“The outpouring support from our wonderful Victoria community and all over the nation have been phenomenal!” it said. “UNITED WE STAND! Please don’t politicize the tragedy! Stay United.”

The Victoria Advocate on Saturday reported that in July 2013, a man admitted to painting “H8,” a computer shorthand for “hate,” on the outside of the building.

On Jan. 7, a mosque under construction near Lake Travis in Austin was burned to the ground.

The Texas office of the Council on American-Islamic Relations said like that blaze, it would monitor the investigation of the Victoria fire.

“Because of growing anti-Muslim bigotry in our nation, and because of the recent spike in hate incidents targeting Islamic institutions and individuals, we urge investigators to keep the possibility of a bias motive for this fire in mind,” CAIR-Houston Executive Director Mustafaa Carroll said.

There’s been no determination yet for the Austin blaze, Diane Kanawati, with CAIR-Austin, said Saturday.

In December, a man was sentenced to four years in prison for setting fire to a Houston mosque where he worshipped. Gary Nathaniel Moore pleaded guilty to arson and using a fire as a deadly weapon in a Dec. 25, 2015, blaze that caused significant damage at the Islamic Society of Greater Houston mosque.