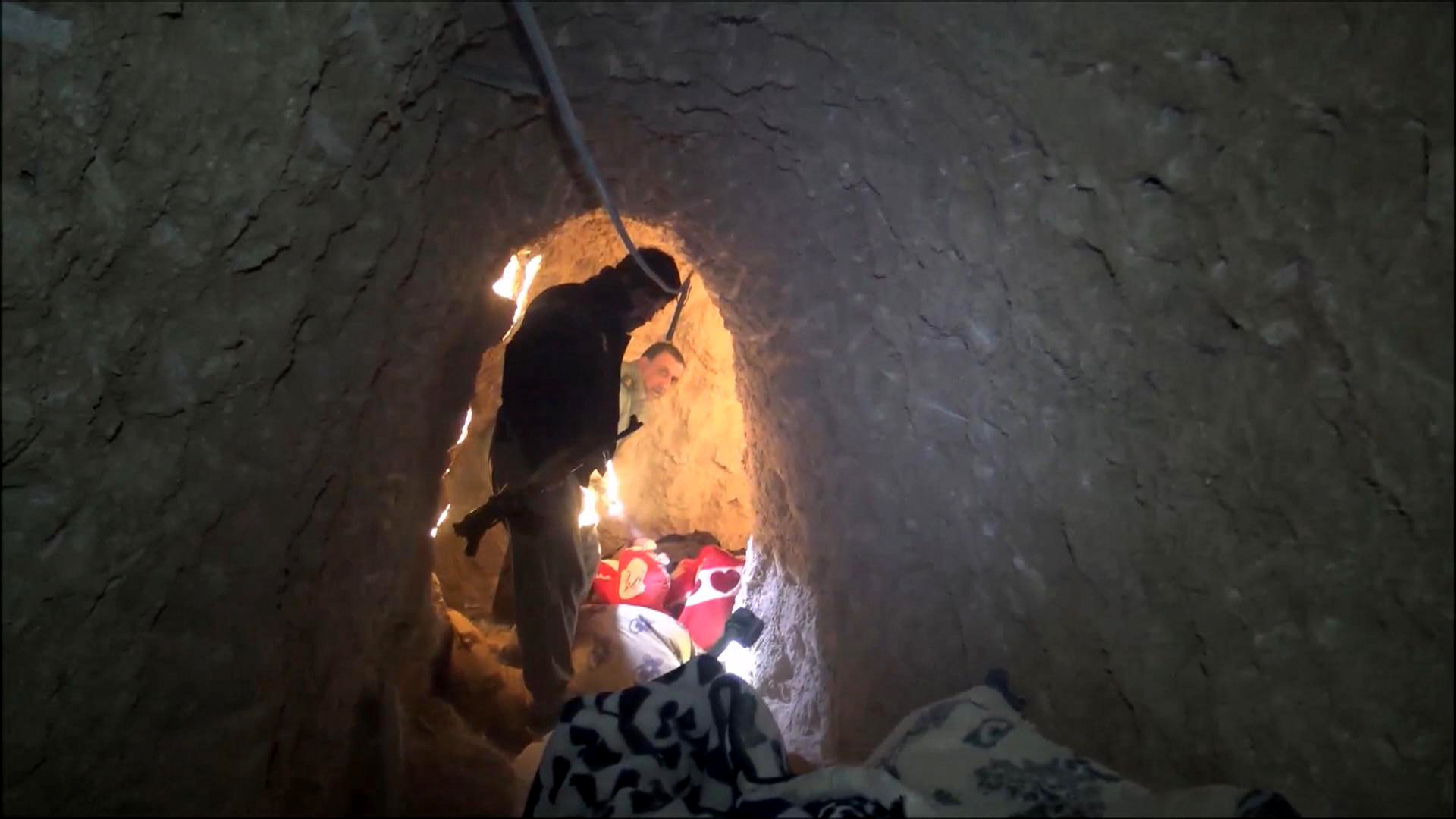 IRBIL, Iraq -- Under the Iraqi town of Sinjar, Islamic State of Iraq and Syria (ISIS) militants built a network of tunnels, complete with sleeping quarters, wired with electricity and fortified with sandbags. There, they had boxes of U.S.-made ammunition, medicines and copies of the Quran stashed on shelves.

The Associated Press obtained extensive video footage of the tunnels, which were uncovered by Kurdish forces that took the city in northwestern Iraq earlier this month after more than a year of ISIS rule.

"We found between 30 and 40 tunnels inside Sinjar," said Shamo Eado, a commander from Sinjar from the Iraqi Kurdish fighters known as peshmerga. "It was like a network inside the city."

"Daesh dug these trenches in order to hide from airstrikes and have free movement underground as well as to store weapons and explosives," Eado said using an Arabic acronym for ISIS. "This was their military arsenal."

The video, shot by a freelancer touring the town with Kurdish fighters, showed two tunnels running several hundred meters (yards), each starting and ending from houses, through holes knocked in walls or floors.

The narrow tunnels, carved in the rock apparently with jackhammers or other handheld equipment, are just tall enough for a man to stand in. Rows of sandbags line sections of the walls, electrical wires power fans and lights and metal braces reinforce the ceilings. One section of the tunnel resembled a bunker. Dusty copies of the Quran sit above piles of blankets and pillows. Prescription drugs - painkillers and antibiotics - lie scattered along the floor.

In another section of the tunnel, the footage shows stocks of ammunition, including American-made cartridges and bomb-making tools.

CBS News correspondent Charlie D'Agata was embedded with the Kurdish forces when they reclaimed the strategic city of Sinjar. He said the Peshmerga quickly managed to seize parts of a vital highway used by ISIS to ferry supplies from its de-facto capital in Raqqa, Syria, to Mosul, an Iraqi city of more than 1 million people and the terror group's stronghold in Iraq.

From their position on the mountainside, D'Agata watched as Kurdish forces searched for targets and passed the coordinates back to U.S. advisers, who would call in airstrikes on ISIS positions. The city fell quickly to the Peshmerga.

ISIS has been digging tunnels for protection and movement throughout the territory it controls in Iraq and Syria, even before the U.S.-led coalition launched its campaign of airstrikes against the group more than a year ago. "This has been part of ISIS' strategy from the very beginning," said Lina Khatib a senior research associate at the Arab Reform initiative, a Paris-based think-tank. "ISIS has been well prepared for this kind of intervention."

ISIS took control of Sinjar in August 2014, killing and capturing thousands of the town's mostly Yazidi residents. Yazidis, a religious minority in Iraq with roots that date back to ancient Mesopotamia, are considered heretics by the hard-line ISIS. Hundreds of women are thought to still be in ISIS captivity, those who have escaped say many Yazidi women are forced to convert to Islam and marry ISIS fighters.

After pushing ISIS out of Sinjar, peshmerga officials and local residents have uncovered two mass graves in the area. One, not far from the city center is estimated to hold 78 elderly women's bodies. The second grave uncovered about 9 miles west of Sinjar contained between 50 and 60 bodies of men, women and children.

Eado, the peshmerga commander, said that as Kurdish forces clear Sinjar of explosives, he expects to find more tunnels and evidence of atrocities.