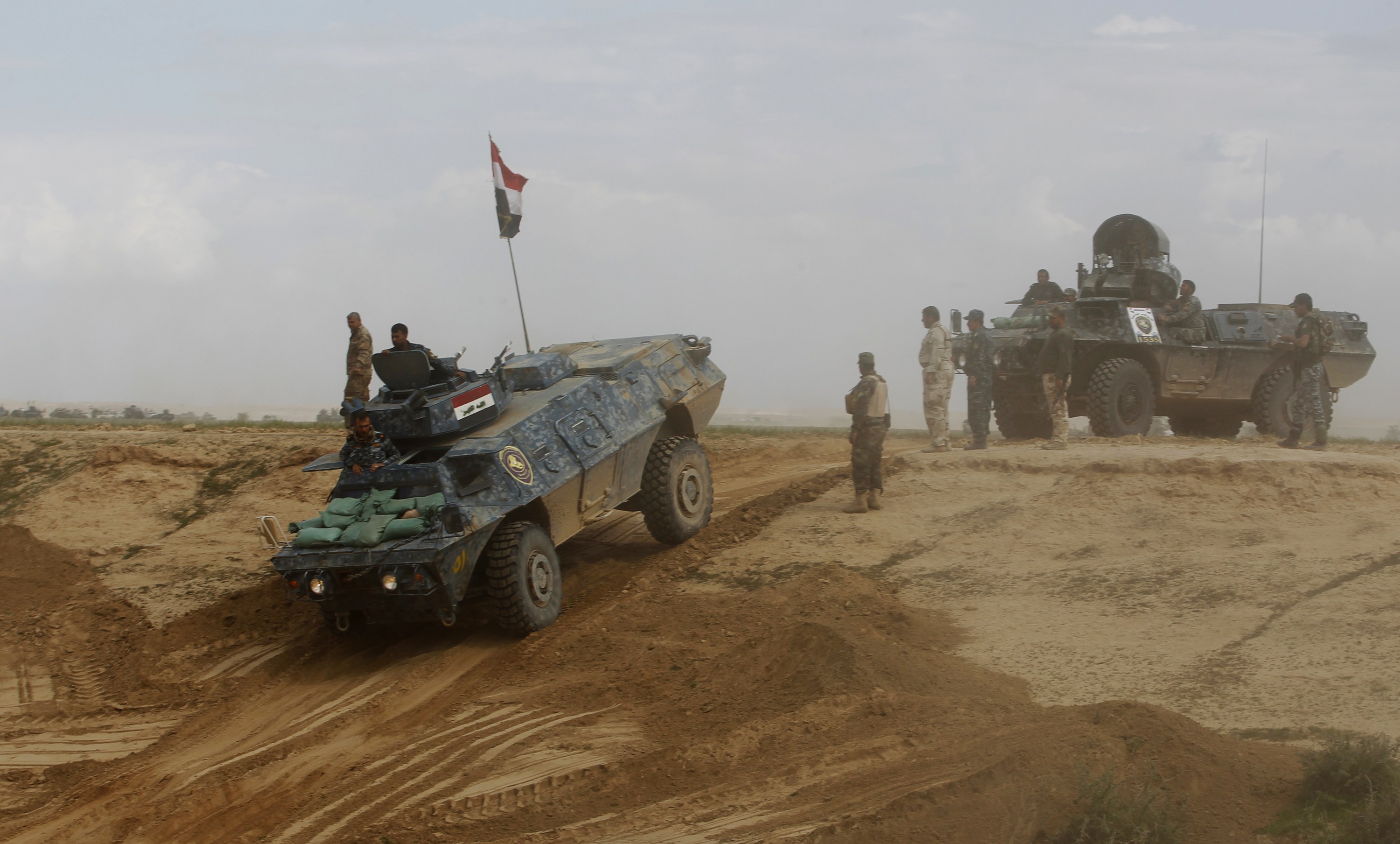 Iraqi troops and Shiite militias battled the Islamic State of Iraq and Syria (ISIS) Wednesday for a third day on the outskirts of militant-held Tikrit, unable to advance further on Saddam Hussein's hometown as roadside mines and suicide attacks slowed their progress.

Soldiers found some 100 mines and bombs scattered along a 5-mile stretch of road on the way to the strategic city on the Tigris River, Salahuddin deputy governor Ammar Hikmat said Tuesday.

The discovery underlined how the battle for Tikrit likely will pivot on allied Iraqi forces' ability to counter such weapons, a mainstay of al Qaeda in Iraq, ISIS' predecessor, as it fought American forces following their 2003 invasion of the country.

In an unusual alliance bridging the divide between the main sects of Islam, Iranian-backed Shiite militias and Sunni tribes have joined Iraq's military in the operation to retake Saddam Hussein's hometown from ISIS, while the U.S.-led coalition has remained on the sidelines.

CBS News' Holly Williams says nearly 30,000 troops and allied militia members are on the ground, according to officials -- the biggest offensive since ISIS swept across northern Iraq last year.

But, adds Williams, it looks more like a rag-tag army than a well-disciplined national military.

If the unlikely coalition fails to take Tikrit, it could slow down plans to recapture Mosul, Iraq's second biggest city, which lies just to the north.

U.S. military officials have said a coordinated military mission to retake Mosul will likely begin in April or May and involve up to 25,000 Iraqi troops. But the Americans have cautioned that if the Iraqis aren't ready, the offensive could be delayed.

The bombs are "the main obstacle in the way of the attacking forces, which have to wait for bomb experts or to go around the area," Hikmat told The Associated Press. "And this costs time."

Extremists from ISIS, which holds both a third of Iraq and neighboring Syria in its self-declared caliphate, have littered major roadways and routes with mines. Such mines allow the extremists to slow any ground advance and require painstaking clearing operations before troops can safely move through.

Suicide bombings also aid the militants in weakening Iraqi forces and have been used extensively in its failed campaign for the Syrian border town of Kobani.

A militant website affiliated with ISIS said this week that an American jihadi carried out a suicide attack with a truck bomb on the outskirts of the nearby city of Samarra, targeting Iraqi forces and Shiite militiamen. The posting identified him by the nom de guerre of Abu Dawoud al-Amriki, without elaborating.

A suicide bomber also drove a military vehicle Tuesday afternoon into a checkpoint manned by government forces and Shiite fighters south of Tikrit, killing four troops and wounding 12, a police officer and a medical official said.

ISIS seized Tikrit in June, massacring more than 1,000 Iraqi government soldiers and gaining support from many powerful local Sunni tribes, the members of which have now been offered amnesty by the Iraqi authorities.

Iraqi officials say the assault is being supported by helicopters and fighter jets, but so far there have been no American airstrikes, even though the strikes have proven decisive in defeating ISIS elsewhere.

In the battle for Tikrit, U.S. officials said Tuesday that Iraq's government simply hasn't requested such air support. The U.S. officials said the U.S.-led coalition was not involved in the Tikrit operation, and according to a report in the New York Times, that could be down to tensions between Baghdad and Washington.

An aide to Iraqi Prime Minister Haider al-Abadi told the Times that officials in Baghdad were annoyed that "the Americans continue procrastinating about the time it will take to liberate the country."

"Iraq will liberate Mosul and Anbar without them," al-Abadi's aide, Ali al-Alaa, told the newspaper.

According to the report, the frustration in Baghdad began after unnamed U.S. military officials, who suggested just weeks ago that the battle to retake Mosul would begin in the spring, backtracked to suggest Iraqi forces wouldn't be ready for the operation until the autumn.

There has been increasing consternation among some Iraqi lawmakers that the U.S. military is operating with too much free license inside the country, to the extent that Prime Minister al-Abadi urged the disgruntled members of parliament on Tuesday to hold a vote and decide once and for all whether the nation is ready to reject American support.

Al-Abadi told a group of parliamentarians who have objected to the ongoing U.S. military presence that the U.S.-led coalition's intervention in Iraq came via an official request submitted to the United Nations by the previous Iraqi government, demanding protection after the ISIS invasion.

"If you don't want (protection), let there be a vote in parliament. Let parliament say 'we don't want any foreign assistance, we need no one, we will fight alone,' and then we could take the necessary measures to tell the coalition, 'thank you very much for what you have done, but we don't want you on our land anymore,'" said al-Abadi.

Abbadi assured the objecting MPs that Iraq's sovereignty was not being compromised by the coalition's operations.

"Vice President Biden stressed during our meeting in Munich Washington's commitment to safeguarding Iraqi sovereignty," he told them.

Acknowledging that allied Shiite militia forces fired on a U.S. Apache military helicopter several days earlier in an incident which could easily have escalated dangerously, al-Abadi assured the lawmakers that "any movement by any helicopters or other planes takes place with our permission and our knowledge."

The Shiite militia members, who fired on the helicopter from an Iraqi Army base near Fallujah, did not bring the Apache down, and there was no indication they caused serious damage. Al-Abadi warned that if the Apache crew had returned fire, it could have caused significant loss of life at the Iraqi base.

With the backdrop of the tension regarding plans to retake Mosul, the Iraqi government announced the offensive for Tikrit on Monday, apparently without coordinating with the U.S. military.

The heavy reliance on Iran-backed Shiite fighters, who, according to The Times report, comprise two thirds of the 30,000-strong force vying for control of Tikrit, has also caused some concern in Washington.

In an interview with "CBS This Morning's" Charlie Rose, broadcast on Tuesday, U.S. Director of National Intelligence James Clapper acknowledged that Tehran has "a very robust commitment to the fight" and has people there in an advisory capacity.

Clapper said the Iranians have "brought in large amounts of weaponry" to Iraq.

Speaking Tuesday to "CBS This Morning," CBS News senior security contributor and former CIA deputy director Michael Morell agreed that the Iranians and their proxy soldiers inside Iraq stood the best chance of defeating ISIS, but said that also came with some possible serious consequences.

"There's a real risk here that over the long run we can defeat ISIS in Iraq, but we might hand Iraq to the Iranians, in a diplomatic sense," he said.

"Iran is, I think, the most effective fighting force inside of Iraq. They have trained, they have supplied 100,000 Shiite militia, that compares to 50,000 Iraqi security forces who are not very effective," Morell said. "The Iranians are actually on the ground fighting with those Shiite militia."

Iranian officials have acknowledged that members of its elite Quds force, a military special forces division, are fighting inside Iraq.

Morell said that while the battle against ISIS seems to have united the two Islamic sects for the time being, the centuries-old rift could reignite at any time.

"As the Shiite militia and the Iranians push into Sunni areas, I think one of the things that you're going to see, given this Sunni-Shiite tension, is you're going to see Sunni Arabs actually come over to the side of ISIL. So from propaganda perspective, this will be a bonanza for ISIL," Morell said, using an alternate acronym for the militant group.