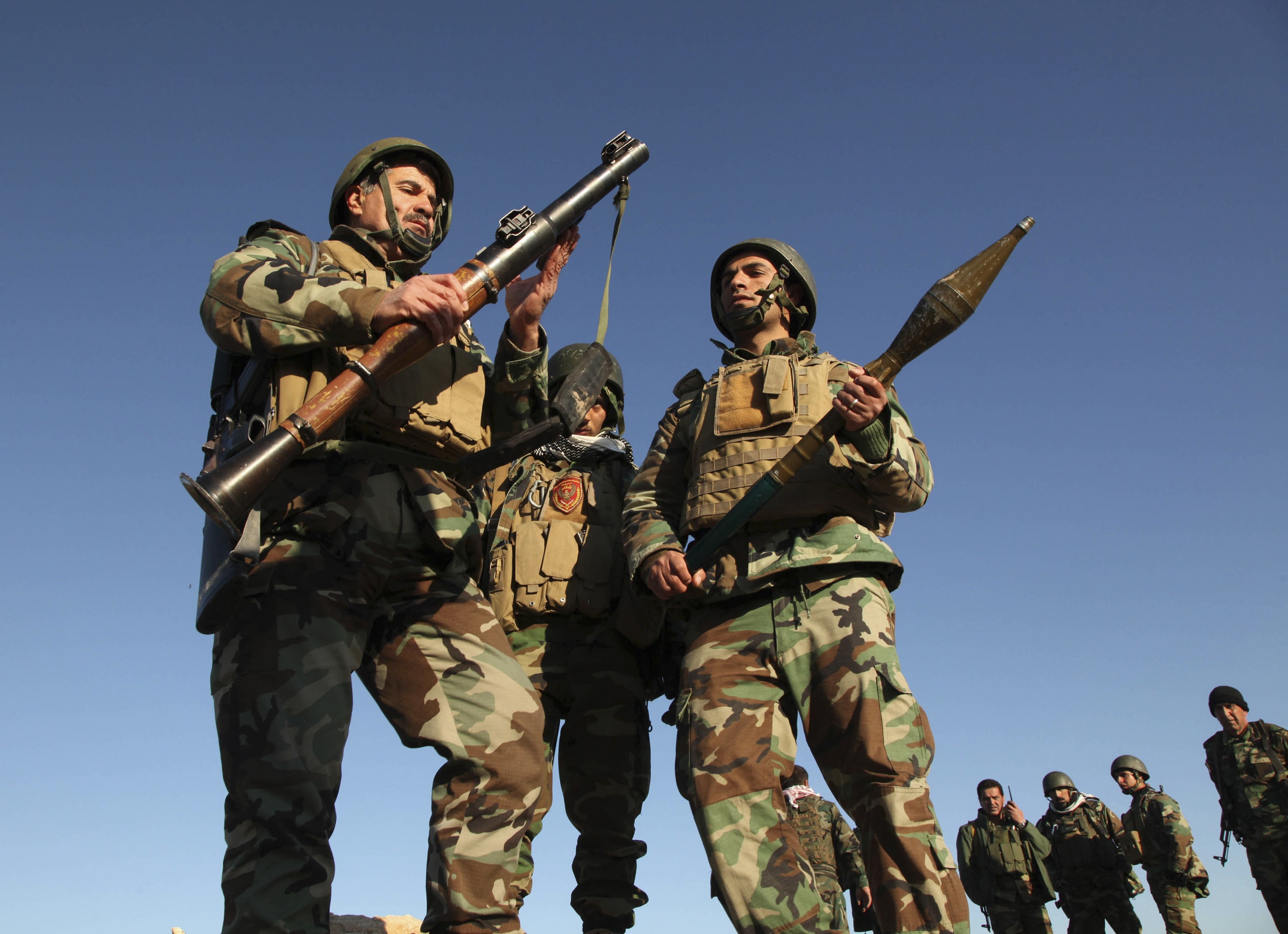 KIRKUK, Iraq -- Shiite Arab militias have flooded into northern Iraq's Kirkuk region to help Kurdish forces battle the Islamic State of Iraq and Syria (ISIS), but their uneasy alliance threatens to reignite a much older conflict over the oil-rich area pitting the largely autonomous Kurds against the Arab-led government in Baghdad.

All across Iraq, the rapid advance by ISIS extremists over the past year has drawn longtime rivals into reluctant alliances. The shared struggle could with time help Iraqis forge a long-elusive sense of national unity. But it also risks papering over disputes that could burst into the open if the threat subsides.

Here are some of the strange bedfellows in Iraq's fight against ISIS.

Shiite Arab militias officially known as the Popular Mobilization Forces have teamed up with the Kurdish peshmerga in a number of battles, breaking the siege of the northern Shiite-majority town of Amirli in August and more recently, driving ISIS militants from a string of towns in Diyala province, northeast of Baghdad.

But Kirkuk is different. Kurdish forces claimed control of the city just days after ISIS swept across northern Iraq last June, and their longstanding goal of incorporating it and surrounding areas into their semiautonomous region seemed within reach. But the city's Arabs and Turkmen, as well as Baghdad, have long opposed such a scenario.

For now, the Shiite fighters are making common cause with the Kurds against ISIS, a mortal enemy of both. But if the Iranian-backed militias gain a foothold in the region, they could one day help Baghdad wrench it back.

Kurdish regional President Massoud Barzani alluded to such fears earlier this week, saying only peshmerga troops can operate in the city of Kirkuk. The next day Hadi al-Amiri, a top Shiite militia commander, told a Kurdish TV channel his forces "are able to go wherever if needed."

As the United States has assembled a coalition to aid Iraqi forces with airstrikes, Baghdad's influential neighbor Iran has organized and backed the Shiite militias on the ground. Both sides are also believed to be aiding Kurdish forces. Iraq has welcomed aid from both, but risks being drawn into a region-wide proxy war pitting Iran against the U.S. and its Gulf allies.

While Washington and Tehran both view ISIS as a regional menace, they are sharply divided on the conflict in Syria, where Iran is a key backer of President Bashar Assad. They have also long been at odds over Iran's disputed nuclear program, as well as its hostility toward Israel and support for militant groups like Hezbollah and Hamas.

The United States and Iran insist they do not coordinate their operations in Iraq, making it in many ways an alliance of inconvenience.

The Government and The Sunnis:

Virtually everyone agrees that the only way to defeat ISIS is to rally tribes and militias in the Sunni heartland to rebel against it. The formula worked for a time starting in 2006, when Sunnis allied with U.S. troops to drive out al-Qaida in Iraq, a precursor of the extremist group.

This time it will be more difficult. Many of the Sunni tribes that took part in the Sahwa, or Awakening, feel they were later betrayed by the Shiite-led government, which neglected them after the Americans left. They also harbor a deep distrust of the Shiite militias, which rights groups say have terrorized Sunni civilians. ISIS has meanwhile severely punished those who have opposed it, massacring scores of men, women and children from unruly tribes in a brutal warning to others.

Iraq's Prime Minister Haider al-Abadi has tried to reach out to Sunnis following the divisive rule of his predecessor Nouri al-Maliki, pushing for the creation of a new National Guard force reminiscent of the Sahwa. But many Shiites in his government distrust the Sunni tribes, viewing them as a holdover from the cruel reign of Saddam Hussein's Sunni-dominated government. And it's not yet clear whether enough Sunnis in ISIS's self-styled caliphate see the Baghdad government as a better option.

The Kurds have proven to be the most unified and disciplined force battling ISIS, but even among them there are divisions that could undermine their struggle.

Kurdish militiamen from the Turkey-based Kurdish Workers' Party (PKK) and the Syria-based People's Protection Units (YPG) have crossed into Iraq and massed outside the northern town of Sinjar, a town still in the grip of ISIS despite months of blistering airstrikes.

The Kurdish peshmerga have been a close U.S. ally since Saddam's rule, but the PKK waged a long and bloody struggle against NATO ally Turkey, and Washington considers it a terrorist group. The YPG has, meanwhile, claimed Sinjar and surrounding areas as part of Rojava, its self-declared Kurdish enclave in northern Syria, against the wishes of Iraq's Kurds.