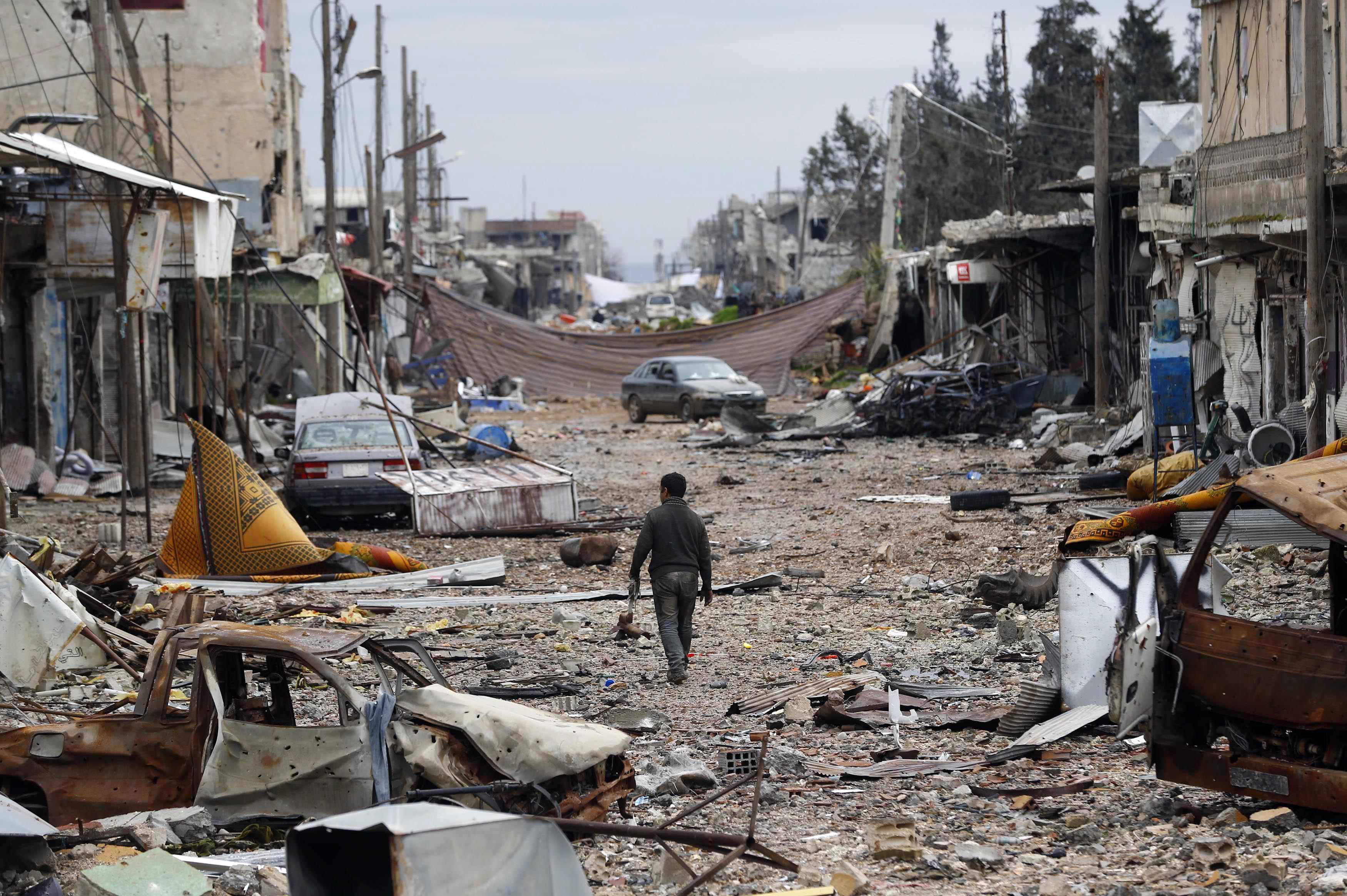 BEIRUT -- The Islamic State of Iraq and Syria (ISIS) has acknowledged for the first time that its fighters have been defeated in the Syrian town of Kobani and vowed to attack the town again.

In a video released by the pro-ISIS Aamaq News Agency late Friday, two fighters said the airstrikes by the U.S.-led coalition were the main reason why ISIS fighters were forced to withdraw from Kobani. One fighter vowed to defeat the main Kurdish militia in Syria, the People's Protection Units known as the YPG.

On Monday, activists and Kurdish officials said the town was almost cleared of ISIS militants, who once held nearly half of Kobani.

An Associated Press video from inside the town showed widespread destruction, streets littered with debris and abandoned neighborhoods. The video also showed a new cemetery with fresh graves.

The town's famous Freedom Square, with a statue of an eagle spreading its wings, stood intact in the middle of the destruction. The square is near the so-called Kurdish security quarter -- an eastern district where Kurdish militiamen maintained security buildings and offices, and which was occupied by ISIS fighters for about two months until they were forced out earlier in January.

In the newly released ISIS video, the militant fighters acknowledged that they have been driven from the town.

"A while ago we retreated a bit from Ayn al-Islam because of the bombardment and the killing of some brothers," said one masked fighter, using the group's preferred name for Kobani. He spoke Arabic with a north African accent.

The failure to capture and hold Kobani was a major blow to the extremists. Their hopes for an easy victory dissolved into a costly siege under withering airstrikes by coalition forces and an assault by Kurdish militiamen.

The United States and several Arab allies have been striking ISIS positions in Syria since Sept. 23. The campaign aims to push back the jihadi organization after it took over about a third of Iraq and Syria and declared the captured territory a new caliphate.

Now Kurdish officials are hailing the retaking of Kobani as an important step toward rolling back the Islamic State group's territorial gains.

"Kobani Canton is a representative of the resistance against terrorism in the world," said senior Syrian Kurdish official in Kobani, Anwar Muslim. "We hope that the world will support us to come through our struggle against IS."

Meanwhile ISIS vowed that their defeat in Kobani will not weaken them.

"The Islamic State will stay. Say that to (U.S. President Barack) Obama," said the fighter, pointing his finger toward destruction on the edge of Kobani.

The fighters both laid blame for their defeat on the coalition air campaign, seemingly downplaying the role played by Kurdish militiamen -- whom they refer to as "rats."

Another ISIS fighter, also speaking in Arabic, said while standing on a road with a green sign with "Ayn al-Islam" sprayed on it: "The warplanes did not leave any construction. They destroyed everything, so we had to withdraw and the rats advanced."

"The warplanes were bombarding us night and day. They bombarded everything, even motorcycles," the fighter said.

ISIS launched an offensive on the Kobani region in mid-September, capturing more than 300 Kurdish villages and parts of the town. As a result of the airstrikes and stiff Kurdish resistance, the extremists began retreating a few weeks ago, losing more than 1,000 fighters, according to activists.

More than 200,000 Kurds were forced from their homes. Many fled to neighboring Turkey.

Earlier this week, Kurdish officials said YPG fighters have launched a counterattack to retake some of the surrounding villages around Kobani, many of which remain in ISIS hands.