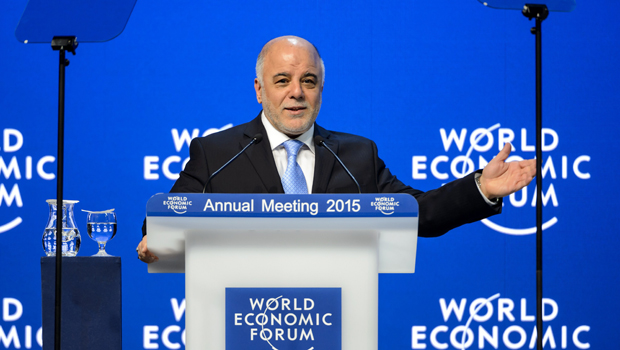 The leader of Iraq expressed optimism in his country's fight against Islamic extremists Friday but pleaded for more help from the international community and called for outside intervention to end the civil war in Syria.

"The challenges are huge," Iraqi Prime Minister Haider al-Abadi told "CBS This Morning" co-host Charlie Rose at the World Economic Forum in Davos, Switzerland. "I have to be blunt on this ... we need help."

Al-Abadi agreed with comments from top U.S. officials that about half of the leadership of the Islamic State of Iraq and Syria, or ISIS, had been killed in the international coalition's campaign. Secretary of State John Kerry made that claim Thursday, a sentiment echoed by other military and diplomatic officials.

"We have been surprised in some instances that Daesh fighters just flee," al-Abadi told Rose, using another name for ISIS.

Army Gen. Lloyd Austin, the head of U.S. Central Command, told the Wall Street Journal in an interview published Thursday that the U.S. and Iraq were planning for an assault by this summer to retake Mosul.

"It can be done," al-Abadi told Rose. "I'm telling you, there may be a surprise there."

The prime minister praised Western powers for agreeing in London Thursday to let Iraq defer payment on certain arms sales. He noted later in the conversation with Rose that Iraq had a similar deal with Iran.

"They have been very prompt in sending arms, sending munitions without even asking for payment first," al-Abadi told Rose. "Of course, we pay later."

Despite al-Abadi's optimism for fighting ISIS, he said he was "pessimistic" of the ongoing civil war in Syria.

"I cannot see a plan to save the Syrian people," al-Abadi told Rose. "If this war continues in Syria, all it's doing is damaging Syria, making more refugees, killing more civilians, then it must be stopped."

He called on the international community to step in to cease the hostilities involving the Syrian dictatorship and armed groups, which range from ISIS to U.S.-backed rebels. He said countries have talked enough about the crisis.