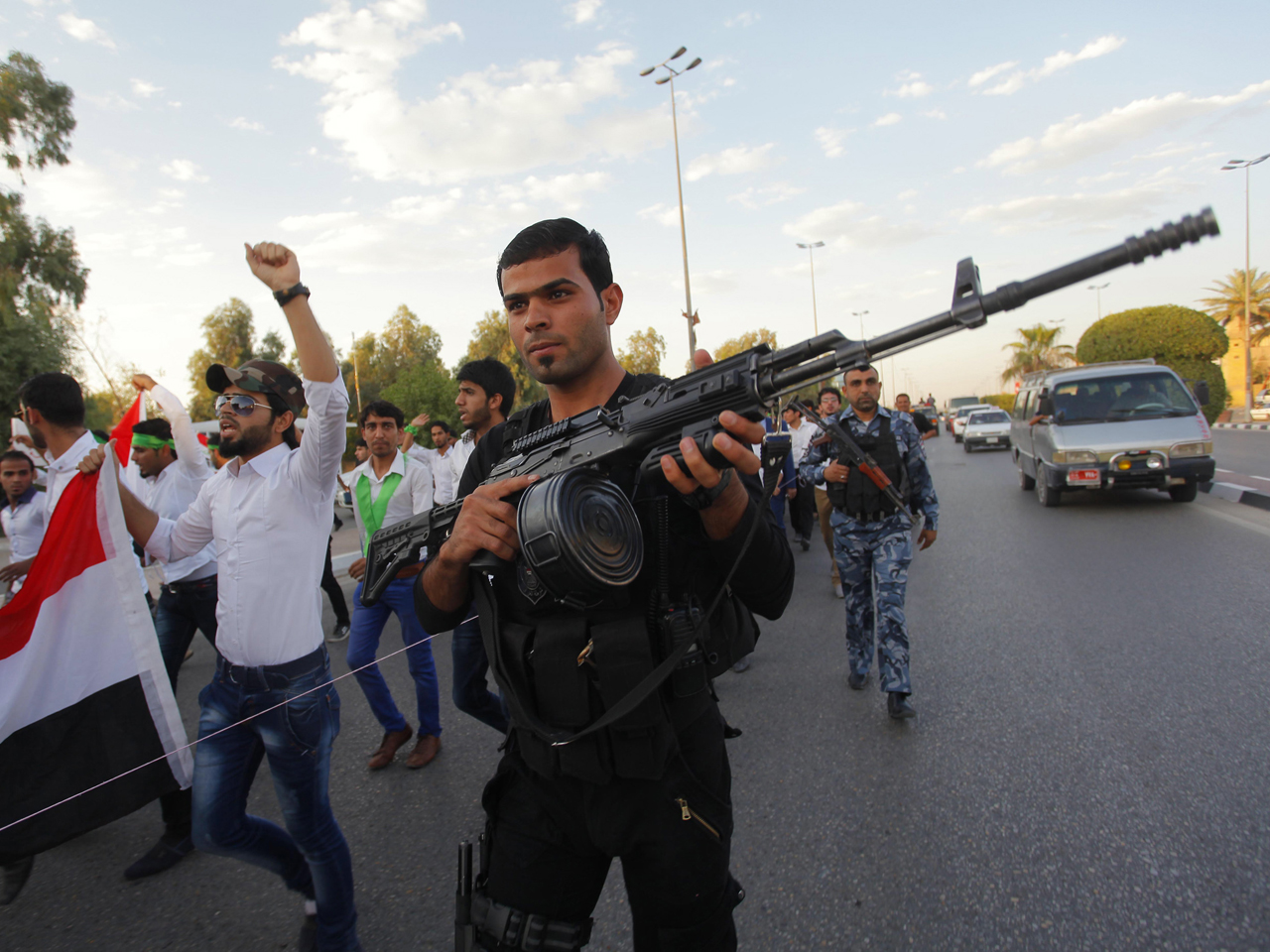 After a string of flash victories in Mosul, Tikrit, Kirkuk and Diyala, the jihadist Islamic State of Iraq and Syria (ISIS) boldly declared that its fighters were going all the way into Baghdad. The last couple of days have seen Iraqi security officials rush to pull themselves together, and they've now announced a new security plan to protect the capital city from the advancing Sunni Islamic extremists.

"The plan consists of intensifying the deployment of forces and increasing intelligence efforts and the use of technology such as (observation) balloons and cameras and other equipment," Interior Ministry spokesman Brigadier Gen. Saad Maan said Friday.

Based largely on the rapid fall of Mosul - Iraq's second largest city - and Tikrit earlier this week, many expressed real concern that Baghdad could succumb to the same fate, even if it took a little longer. The inept performance of the fleeing Iraqi armed forces in those two cities bolstered the fears.

But the rapid advance of ISIS, also known as the Islamic State of Iraq and the Levant, or ISIL, while indisputably dire for the country and the region, belies several realities on the ground in Iraq.

By virtually all accounts, the territory seized by ISIS since Monday has been won with very little fighting. In fact, ISIS claimed the ground less by way of their own military prowess than by way of the spectacular failure of the Iraqi government forces.

Police and army commanders - many of whom may now face court-martial - simply opted to abandon their positions and flee to nearby Kurdistan after giving orders for their forces to withdraw from Mosul.

The semi-autonomous and oil-rich Kurdish territory in northern Iraq is guarded by the local Peshmerga militia, and ISIS stands little chance of making inroads in the region, which remained relatively peaceful even during the heart of the U.S.-led war against Saddam Hussein's government.

"They're terrorists, and I want to crush them," one soldier who fled Mosul told CBS News correspondent Holly Williams in the northern city of Erbil, "but we couldn't resist them because our commanding officers abandoned us."

[CBS News will be covering the latest developments extensively tonight on the "CBS Evening News," with Williams in Erbil, Clarissa Ward in Baghdad and Elizabeth Palmer in Damascus, Syria.]

While the group has rightly earned a reputation as ruthless, with tactics so violent even al Qaeda cast them off as a subsidiary, there has been no indication that ISIS posed a genuine threat as a fighting force up against a military supplied with U.S.-supplied weapons, attack helicopters and thousands of troops.

CBS News has examined hours of videos from Mosul, Tikrit, Samarra, Kirkuk, and Diyala this week and has seen no evidence to suggest that ISIS has thousands of fighters to deploy - certainly not the numbers that would be required to overrun a city the size of Mosul in just under two hours - had they faced any serious resistance.

These videos can't be trusted to paint a full picture of the group's capacity, but they are fundamentally produced and distributed online as propaganda, and if they could show the world thousands of fighters waving their black banner, they likely would.

The biggest ISIS contingent seen in the videos from Iraq this week, however, was a convoy of abut 20 vehicles; no more than a couple hundred lightly armed men. Multiple reports about ISIS seizing helicopters and other military hardware were worrying, but there's been no indication the group's militants have the capacity to put that type of resource into use on the battlefield.

Also important to note is that in places where ISIS did come up against a reasonably organized resistance from Iraqi security forces, they quickly moved on to the next easy target. ISIS has failed to overrun the highly guarded city of Baiji, which boasts a large power plant and the biggest oil refinery in Iraq.

"Baiji is a strategic place that the government simply could not afford to lose," Iraqi activist Youssef Tamimi told CBS News. He said the city is well-guarded by the army, including some of the military's elite forces.

Those same forces guard Samarra, 70 miles north of Baghdad. There's been fighting around the city, but ISIS has failed to make any real advance.

The military isn't fighting against ISIS alone in Samarra, either. The city is home to the Golden Dome shrine, one of the holiest sites in Iraq to Shiite Muslims, and Shiite militias have joined the fight.

If the shrine were to be attacked and desecrated by ISIS, it would almost certainly plunge the country into a bloody civil war. Heavily Shiite areas like this represent roadblocks to ISIS in the south while their path is blocked in much of the north by the Kurds.

It appears Iraq's army may now be recovering from the initial shock of Mosul and Tikrit and may be reorganizing itself. Iraqi Prime Minister Nouri al-Maliki headed to Samarra Friday, accompanied by his top army generals. Iraqi media reported that the visit was to oversee a military plan to recapture Tikrit.

On Thursday, the military released onboard video from aircraft allegedly showing Iraqi aircraft bombing ISIS positions in Tikrit and Mosul. The video could not be independently confirmed. The army also announced that it had received six MI-35 attack helicopters and entered them into service the same day.

While ISIS might not be capable of building tremendously on their stunning successes of earlier this week, the group's campaign of shock and awe did succeed in moving the shadow of sectarian war indisputably back over Iraq.

On Friday, Grand Ayatollah Ali al-Sistani, the highest Shiite authority in the country, declared a "Sufficiency Jihad" across Iraq: a clear message to the whole of Iraqi society that the fight against ISIS is a duty, not an option.

Just hours after he made his call, Iraqi media reported thousands of Iraqis, most of them certainly Shiites, flocking to recruitment centers to volunteer for the fight.

As these militias grow and confront ISIS, and if the military fails to regroup and counter the group more effectively itself, it could easily spiral into a sectarian war between Shiite and Sunni played out across the heartland of Iraq, without the need for any one incident to trigger it.