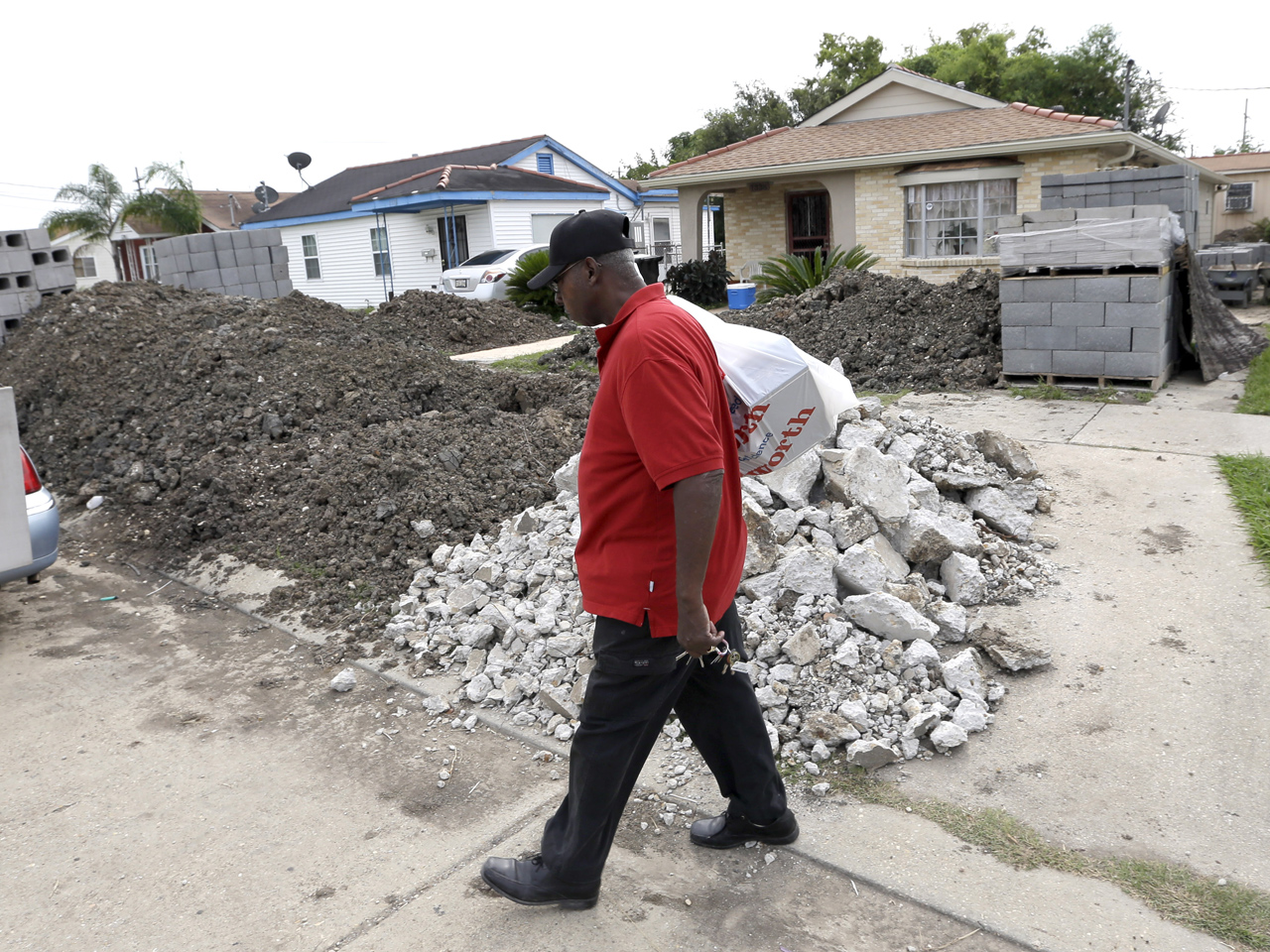 (CBS/AP) MIAMI - The center of Tropical Storm Isaac's projected path took it directly toward New Orleans for a projected landfall as early as Tuesday night, nearly seven years to the day after Hurricane Katrina devastated the city.

At 8 p.m. Monday, the National Hurricane Center reported that Isaac's top sustained winds had remained at 70 mph for several hours, up from about 65 mph the evening before. A tropical system becomes a Category 1 hurricane once winds reach 74 mph. CBS News consultant David Bernard reports the storm is predicted to run right over New Orleans, and its maximum sustained winds could be up to 100 mph by the time it makes landfall late Tuesday or early Wednesday.

Its center was about 230 miles southeast of the mouth of the Mississippi River, and it was moving northwest at 10 mph.

A hurricane warning is in effect from Morgan City, La., to the Alabama-Florida line -- an area covering 5 million people. East of the state line to Destin, Fla., hurricane forecasters have now posted a tropical storm warning.

Rain and storm surge is considered a major threat, especially if the storm's movement continues to slow down. A lot of the lower Mississippi River Valley along the Gulf Coast could see eight to 12 inches of rain. It's not out of the question that some spots could see up to 20 inches of rain. Additionally, coastal flooding will be a problem from both rain and storm surge.

President Barack Obama has declared a state of emergency in Louisiana as that state prepares for Isaac.

Obama has asked the Federal Emergency Management Agency to coordinate disaster relief efforts with state and local officials along the Gulf Coast.

Jindal, a Republican, shot back late Monday in a letter to the Obama administration that the declaration fell short of the help he was requesting.

Jindal said the storm is forecast to strengthen to a Category 2 hurricane "and squarely impact the state of Louisiana."

The governor said the storm now threatens the entire state.

The White House did not respond immediately to requests for comment on Jindal's letter.

Forecasters predict Isaac will intensify into a Category 1 hurricane later Monday or Tuesday. Isaac could become the first hurricane to hit the Gulf Coast since 2008.

CBS News correspondent Mark Strassman reports many oil refining facilities in the Gulf's refinery row are exposed to the northeast quadrant of Isaac -- the most powerful and dangerous part of the storm. Just the threat of this storm has already shut down 40 percent of U.S. crude production, and 78 percent of oil well production in the Gulf.

Many New Orleans residents are fleeing the storm's path, as Isaac revives painful memories from Hurricane Katrina in 2005.

As she loaded supplies into her car to prepare for Isaac, Linda Grandison's mind rewound to the nightmare of Katrina: Back in 2005, she had to flee her family's flooded home and waited on a bridge for more than three days before being rescued by helicopter.

Though Isaac is far less powerful than the historic hurricane that crippled New Orleans, the system was on an eerily similar path and forecast to make landfall on the seventh anniversary of Katrina, raising familiar fears and old anxieties in a city still recovering from a near-mortal blow seven years ago.

This time, Grandison is not taking any chances. She will stay with her mother in the New Orleans suburb of Gretna, which did not flood in Katrina. The house has a generator to keep the refrigerator running if power goes out, and she has enough charcoal to grill out for days.

"You can't predict God's work. This is nerve-wracking," she said. "I hate leaving my house, worrying if it's going to flood or get looted. But I'm not going to stay in the city again."

If Isaac comes ashore here, it will find a different city than the one blasted by Katrina. This New Orleans has a bigger, better levee system and other improvements designed to endure all but the most destructive storms. Many neighborhoods have rebuilt. Some remain desolate, filled with empty, dilapidated homes.

The Army Corps of Engineers was given about $14 billion to improve flood defenses, and most of the work has been completed. Experts say the city can handle a storm comparable to a Category 3 hurricane. Isaac is expected to come ashore as early as Tuesday night as a Category 1 storm, striking anywhere from west of New Orleans to the Florida Panhandle.

Mayor Mitch Landrieu said he understood residents' worries, but tried to reassure them that the city was prepared.

"I think everything will be OK," he said.

But people in this city aren't easily soothed because they've never forgotten the images of families stranded at the decrepit Louisiana Superdome, people begging for help at the convention center and President Bush's back-slapping congratulatory remarks to then-FEMA Director Michael Brown.

Shawanda Harris lost everything she owned when her ground-floor apartment in low-lying eastern New Orleans was flooded during Katrina. She was on the phone with family and friends Monday as she waited for the latest update on Isaac from the mayor. The neighborhood was packing up and leaving.

Harris planned to caravan out of the city with relatives and head inland to another family house outside New Orleans.

"People ain't taking chances now," she said, keeping an eye on a television that was swarmed with the radar images of Isaac looming over the Gulf of Mexico.

Harris said the preparations were bringing back a lot of unease and heartache reminiscent of 2005.

"It was scary. My whole family was separated. They couldn't find me. The Red Cross had called and told my mom that they found me dead," she recalled.

She said Isaac was coming -- just as Katrina did -- at the end of the month, when many people are low on money.

"They got rent to pay. They got bills. Payday isn't until the end of the month, Friday," she said. "Right now, half our family got money. Some of our family got nothing. That's why we're leaving together."

Below, watch a NASA/NOAA time lapse video of satellite images taken of Isaac