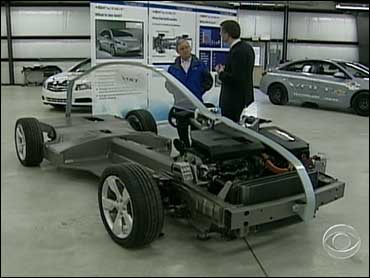 To say General Motors has a lot riding on the Volt is both a bad pun and a big understatement.

But when GM invited reporters to experience the Volt, what they actually drove was the Volt technology stuck into a conventional car called the Chevy Cruze, reports CBS News correspondent Dean Reynolds. The real Volt is not yet ready.

The rush to showcase the technology was clearly designed to generate publicity for the car and public support for the federal money GM needs to stay afloat.

"What makes the technology so significant is actually what is under the skin," said Frank Weber, with GM.

What is under the skin is a 6-foot-long battery that you can recharge every night by plugging it into your garage socket.

Battery power takes the Volt 40 miles. Since most Americans drive less than 40 miles a day, GM says the Volt will use zero gasoline and produce zero emissions. When the charge wears off, an on-board gas tank can power the car and extend the trip 400 miles, addressing what's know in the trade as "range anxiety."

"This is a livable vehicle," said Tony Posawatz, a vehicle line director with GM. "It's not a golf cart or whatever. This is something that people could buy in quantity … particularly if we can get the cost down."

Perhaps way down - because the sticker price will be about $40,000 - for what GM calls a spunky car that can go from zero to 60 in less than nine seconds.

The Volt is due in dealer showrooms by the end of next year, which is itself a show of optimism about GM's future. But there's a problem: sales of existing hybrids have been plummeting for months because the price of gasoline has dropped. If that consumer attitude holds, it could mean that GM will be bringing out the right car at the wrong time.