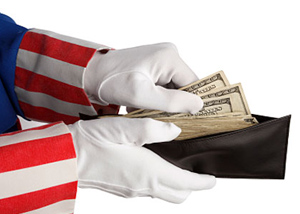 On Monday, Mitt Romney criticized the Obama administration for its zeal for spending and regulation. According to a report in The New York Times:

"For the last three years, Mr. Obama has expanded government instead of empowering the American people," Mr. Romney said. "He's put us deeper in debt, he's slowed the recovery..."

Mr. Romney offered a vision of what he called "economic freedom," arguing for less regulation and less government intervention, and assailed the Obama administration, arguing that its assault on freedom could damage our economy and the well-being of American families for decades to come.

However, this is telling:

"This administration's regulations are even invading the freedom of everyday Americans," he said, before beginning an anecdote about Mike and Chantell Sackett, a couple who ... bought a piece of land on which they had hoped to build a home. But when they started digging ... they were told by the Environmental Protection Agency to stop, because their home was on a wetland....

However, Mr. Romney did not mention that the Sacketts encountered their run-in with the E.P.A. under President George W. Bush's administration, not under Mr. Obama.

One of the big, ongoing criticisms of Obama from conservatives is the claim that the Obama administration has imposed heavy handed regulation. This has supposedly caused considerable uncertainty in the business community, and this is holding back the recovery.

But is it true that the administration has imposed more regulations that, say, the Bush administration? Cass Sunstein, the head of the Office of Information and Regulatory Affairs,  makes the case in the Chicago Tribune that the evidence doesn't support this assertion:

It's important to realize that Cass Sunstein is serving at the behest of the president, but the evidence appears to be carefully assembled. The claim that the administration has been on a regulation binge, and that this has stifled the recovery has been effective politically, but appears to have little basis in reality.

What about the claim made by Romney and others that the Obama administration has engaged in out of control spending? Is that true?

This chart of spending by president shows that Obama is actually the least  spendthrift of recent presidents:

The fact that these numbers are surprising to most people shows that there is a big misunderstanding about the makeup of the stimulus, formally the American Recovery and Reinvestment Act. Many people believe that the stimulus package was mostly spending, but that is not correct. The vast majority of the ARRA was tax cuts, grants to states, and other types of taxes and transfers. As John Taylor, an economics professor at Stanford who served in the Bush administration notes, "In the case of the 2009 stimulus package, there was also an attempt to increase significantly government purchases of goods and services. But the evidence is that this attempt largely failed. A special satellite account produced by the Bureau of Economic Analysis shows that federal infrastructure investment -- at the peak quarter -- increased by only .05 percent of GDP as a result of the stimulus."

Once again, there's a big difference between between what politicians are claiming on the campaign trail, and the actual story.