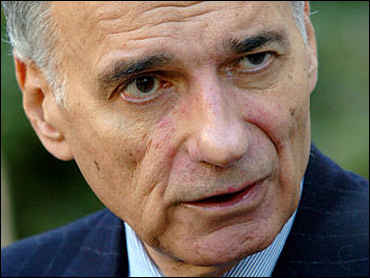 
With two weeks left until Election Day, Ralph Nader is determined to remain in the presidential race despite indications he could again tip the election to President Bush.

CBS News polls suggest Nader supporters would choose Sen. John Kerry by a two-to-one margin over President Bush if the independent presidential candidate were not in the race. But Nader doesn't see it that way. In an interview, he was as fervent as ever, arguing he's not hurting the Democratic nominee.

By all expectations, Nader will get significantly fewer votes than he did in 2000. But as Americans learned four years ago in Florida, it only takes 537 votes to make a president.

"I rebut perception with reality," Nader says. "The idea of going around for seven months, beating up on George Bush everywhere in the way Democrats should be beating up on him... while I'm trying to fend off these stupid ballot access [feuds with] the Democrats, the fact that this is helping Bush, what are they crazy?"

But an aggregate analysis of Nader supporters utilizing CBS News polls since late September shows that the Kerry campaign has reason to be concerned. (A single poll cannot show trend lines for Nader supporters. The size of the sample is too small.)

Nader insists that, "defeating Bush is the short-range objective." But with data indicating he could again cause the defeat of a Democratic candidate, why does Ralph still run?

First, he doesn't accept the data.

Second, even if the trend line of the data is irrefutable he insists the media is missing the big picture. Nader says he gets more voters to the polls and squashes Mr. Bush's support through his constant issue-based criticism of the president.

But polling suggests Nader backers are less likely to vote on Nov. 2 than other voters: 69 percent of Nader supporters compared to 89 percent of all registered voters.

Nader supporters are also more likely than other registered voters to say they did not vote in 2000.

In their one meeting in May, Nader told Kerry that his candidacy would hurt Mr. Bush more than the Democrat.

"I put on the table three ways we could collaborate," Nader says. "One on labor law reform, allowing more trade unions, living wage. The second was ten programs on horrific subsidies of corporations, like to the drug industry and the oil industry. And the third, in prosecutorial style, because he is a former prosecutor, corporate crime, fraud and abuse."

But Kerry didn't bite. For more than 25 days, Nader says his campaign kept calling the Kerry campaign. Those calls have gone unreturned. Kerry never asked him not to run, Nader says. But even if Kerry had asked him to step aside, Nader insists he would have remained in the race.

"Mary Beth Cahill (Kerry's campaign manager) called on the eve of the third presidential debate and she said, 'Where's Mr. Nader going to be in case John Kerry has a free time to call.' And then he never called," Nader says.

For the independent candidate, there is clearly a sense that the constant ballot battles with Democrats and the party's lack of cooperation have stunted any chance for his campaign to work in parlance with Kerry's. The Kerry campaign never believed Nader would withdraw.

Despite heavy resistance by Democrats, Nader will be on the ballot in more than 30 states come Election Day, including Florida.

This is what infuriates Nader. He points out, correctly, that two other third-party candidates – Pat Buchanan and Harry Browne – each earned about 17,000 votes in Florida, also impacting the outcomes of those races.

Nader says if the Democrats lose again, rather than blame him, it's time they did some soul searching.

As if speaking directly to Kerry, Nader says: "Praise me for showing a dozen ways to beat Bush, which you are too indentured, cautious or unimaginative to pick up. The old Democratic Party in the '50s and '40s would have picked it up immediately."

"You run on the old Democratic platform of unequivocally siding with working families over big business," Nader continues. "That's the whole ballgame. There are millions of votes to be had for the Democrats by those that don't believe either party means anything to them.

"The Democrats take the hot economic issues off the table and the Republicans fill them with God, guns and gays. Bush can win votes by calling Kerry a liberal but Kerry can't win votes by calling Bush a militarist or a corporatist. He doesn't even have to call him a conservative."

Though Kerry has stated that he would raise the minimum wage to $7 an hour, Nader believes Kerry should have made the living wage the central issue in his campaign.

Though he knows that if President Bush wins four more years the minimum wage may not increase, Nader insists the hope of his candidacy was to force Kerry to champion populist causes.

Nader refuses to rejoin the two-party system even if it hurts the causes he has championed for decades.

"I went around the country in 1984... showing the difference between Mondale and Reagan," Nader says. "There was no audience. It was called 'the difference,' and we went around swing states and while we got a 'Hi, it's nice to be in Peoria,' we got nothing."

Nader says in 1984 his populist issues were ignored. He vowed, two decades later, to not let that happen again.

"Twenty years later, as a citizen advocate starting many citizen groups, and connecting with others, being shut out of Washington by the two-party proxies for big business who control our government, if you don't go into the electoral arena you might as well close up and go to Monterey and watch the whales," Nader says. "People are interested only if you can deny other parties the vote."

Taking into consideration only the states where Nader's likely to be on the ballot, 20 percent of his supporters say they have a favorable opinion of Kerry, compared to 39 percent of all registered voters in the latest CBS News/New York Times poll.

And illustrating the liberal slant of Nader's base of support, just 12 percent have a favorable view of President Bush, compared to 43 percent of registered voters.

Nader is prepared to be a factor in a possible Bush victory, although he rebuffs that likelihood. He insists if Kerry loses the election it will primarily be because voters "are not being competed for on the economic issues."

"By not championing the perceived economic issues of the American working family, the Democrats have allowed a vacuum to be filled by the Republican social, religious and moral issues. Kerry is taking his liberal flank for granted and thereby not enlarging it."
By David Paul Kuhn