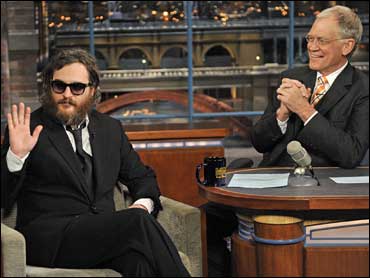 A buzz preceded actor Casey Affleck's directorial debut, "I'm Still Here": Was the movie about brother-in-law Joaquin Phoenix's seemingly downward spiral from actor to hip-hop musician really a no-holds-barred documentary - or was it just a set up?

On Monday in Venice, where his film was screened out of competition at the Film Festival, Affleck said he's leaving the answer up to the audience.

"Elliptically, I would say ... I sincerely don't want to influence people's interpretation," Affleck told reporters. "I can tell you there is no hoax. It makes me think of 'Candid Camera' or something."

The film is full of dark, sometimes graphic scenes about the Academy Award-nominated Phoenix, whose decision to go for a music career and concurrent decline was fodder for late-night comics.

In one scene, Phoenix banters about the irony of his life being depicted in film, when he is trying to get away from the industry. The film follows Phoenix to his last acting and press events, where he grumbles that he "hates" acting.

"I think everyone at some point in their life hates their jobs and the people they are around," he says in opening scenes to explain why he wants to change his life despite his talent and enormous success, which includes an Oscar nomination for playing Johnny Cash in "Walk the Line."

What follows are scenes depicting his negative downturn. There's drug use, graphic language, the search for online sex, a meeting with a prostitute and other hard core scenes, such as of Phoenix attacking a spectator at his own concert.

Throughout the film, Phoenix gains weight and lets his hair and beard grow long and unkempt.

"I know that he is someone that doesn't shy away from letting me see all the different aspects of his personality and if he was willing to do it and I was willing to do it I owed it to him to make it as unflinching look at him as I possibly could," said Affleck, who recently starred in the film "The Killer Inside Me."

Affleck noted that Phoenix was in Venice and "not hiding from the movie."

The documentary includes scenes with well-known entertainers such as Ben Stiller and Sean "Diddy" Combs. Because it would be hard to film Combs and Stiller without their knowing participation, it has fed suspicions that at least some of the film was scripted.

In one scene, Stiller comes in to pitch a script to Phoenix that he turns down, while throughout the film Phoenix semi-obsessively pursues Combs for help in starting his career as a hip-hop performer.

At one point, a close friend of Phoenix who is part of the project is accused of turning on the production and informing an entertainment news outlet that Phoenix's decline is a big joke. That created a rift in the production.

Hoax or no hoax, Phoenix gives an all-out performance, which begs the question he asked himself at the beginning of the documentary: Is the actor playing a role or is a role playing the actor?

While the actor's narcissism is central to the project, the film stands as a portrait of an artist trying to break out of the jail of the same celebrity culture upon which he is dependent.

"When I watched the movie, I am not repulsed by him and I feel for him and I understand him better than I did at beginning of the movie. I have a lot of love for him," Affleck said.