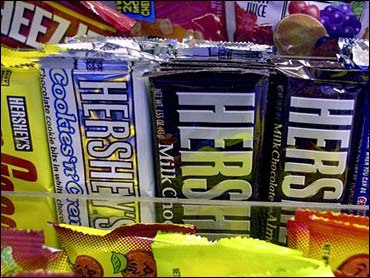 The theme park in Hershey, Penn., is the storied home to Hershey's chocolate. This year it is celebrating 100 years of Hershey kisses.

It's a sugar lover's paradise. Who could have a problem with that?

Well, a lot of people, because the goodies of Hershey Park are meant to be a treat, not a major food group. What worries health care professionals is that when it comes to eating sugar, Hershey could be Anytown, USA.

Dr. David Ludwig treats childhood obesity at Boston Children's Hospital and he is stunned by America's consumption of empty calories. In fact, he says that the average convenience store is a nutritional disaster area.

"All sugar-containing foods aren't bad," he told CBS News correspondent Susan Spencer. "For example, an apple has its main calories come from sugar. But it's surrounded by fiber, so it digests slowly and keeps blood sugar under control."

Including refined sugar, high fructose corn syrup and artificial sweeteners, the average American wolfs down 142 pounds a year, or roughly 2 ½ pound a week. That is up 23 percent in the last 25 years, and is a major factor in soaring rates of obesity and diabetes.

"The problem is when we take sugars and concentrate and refine them, and serve them in massive amounts throughout the food supply," Ludwig said. "That's causing hormonal changes that in many people drive hunger, cause overeating, and increase the risk of diabetes and heart disease."

And it isn't just sugar driving those highs and lows — so do the carbohydrates found in highly-processed food, like white bread and white rice, which turn to glucose when eaten.

"A bagel and a bowl of sugar may taste different, but to the body they're virtually the same thing," he said. "A bagel would do the same thing to blood sugar hormones and hunger several hours after eating it."

Eating half a cup of sugar might well send anyone into sugar shock, says author Connie Bennett. The author of "Susar Shock!" claims sugar just about ruined her life.

"I was socked in by brain fog," she said. "I would have these horrible migraine headaches."

All seemed lost until her doctor diagnosed low blood sugar — hypoglycemia — and told her to lay off the sweets.

"I remember all of a sudden, after three days, I was like, 'Wow! I feel so good,'" she said. "It was as if the fog lifted, and then, after a few weeks, all my ailments disappeared."

Anti-sugar messages may be sinking in. This week Kellogg's said it will no longer advertise a product to kids unless it meets certain nutritional guidelines. Froot Loops for example, have too much sugar to qualify, but Frosted Flakes make Kellogg's cut.

"We hope to enlist 60,000 Alameda County children to forswear sugar for the summer," Bennett said.

But sodas and Froot Loops aren't the whole problem. Sugar — usually as high fructose corn syrup — lies in wait on every grocery shelf. Spaghetti sauce, salad dressing, peanut butter, mayonnaise and ketchup all have it.

Nutrition labels can be deceiving. Sugar content always is listed in grams, but few people know there are 4 grams in a teaspoon and, unlike the listings for salt and fats, there's not a clue as to how many grams of sugar is too many. The Agriculture Department recommends no more than 12 teaspoons a day; that is roughly one 12-ounce soda and a slice of bread.

But spokesperson Melanie Miller of the American Sugar Association points out there is no scientific consensus on how much sugar is too much. Besides, she says, overeating and not exercising is America's real problem, not sugar, which can be an essential ingredient.

"Sometimes we need sugar to make it rise, or make it crisp, or to give it texture," she said. "Another part of that is that the American palate likes sweet things, and manufacturers have recognized that in Europe, they don't use as much sugar."

It seems fair to ask: who's responsible for America's love affair with sugar? Historian Sidney Mintz says you could blame Christopher Columbus.

"Sugar cane was brought to the New World by Columbus on his second voyage," he said.

Cultivation of sugar cane dates back some 12,000 years to New Guinea. By the time of the Greeks, it had spread to Europe.

"There's a description going back to Alexander the Great," Mintz said. "One of his generals writes about finding it in India. He talks about this reed which has this sweet juice in it."

Until the 17th century, sugar was a luxury, only for the rich, who considered it a spice, and sometimes a cure-all.

"In fact, it was mainly used as a medicine at that time," Mintz said. "It was a major ingredient in medicines for the black plague and it was also used by a surgeon who combined the powdered sugar with powdered gold which you'd blow into the eye for eye health."

Soon people began putting more into their mouths than their eyes. Demand grew, and that, says Dr. Mintz, indirectly led to the rise of slavery because sugar cultivation required intensive labor.

"Very difficult and demanding labor; free people wouldn't do it," Mintz said. "I would go so far as to say that the most important reason that slavery was introduced into the New World on a large scale is sugarcane."

By the 19th century, sugar was providing quick, cheap calories to the new factory workers. Commoners were lapping it up — and we're still lapping it up, 200 years later.

Connie Bennett thinks it's time to put on the brakes.

"I tell people, 'Don't believe me, just don't believe me,'" she said. "'Then test it out for yourself. Go a week without sugar and refined carbs, or maybe even two weeks and then just watch yourself like a lab rat.'"

It's a tough sell, but the anti-sugar crowd insists that life without sugar's fleeting pleasures — or its empty calories — really is twice as sweet.

Remarkable friendships from the animal world
Thanks for reading CBS NEWS.
Create your free account or log in
for more features.
View CBS News In
CBS News App Open
Chrome Safari Continue
Be the first to know
Get browser notifications for breaking news, live events, and exclusive reporting.