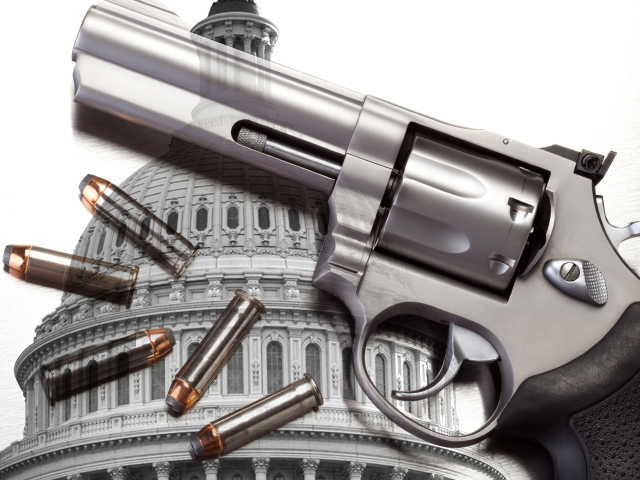 Just days earlier, on March 19, Senate Majority Leader Harry Reid, D-Nev., announced that he would not include a ban on military-style assault weapons - like the rifle used by the killer at Sandy Hook - in the Senate's upcoming gun bill and would focus instead on other gun laws that stood a better chance of passage. Disappointed supporters of the ban mostly moved on, fixing their sights on lower-hanging fruit.

The proposal most likely to make its way to the president's desk is a bill strengthening penalties for illegal gun trafficking. Beyond that, the lift gets much heavier. The biggest prize for gun control advocates is a national background check system for gun purchases. But after talks on the issue between Sen. Chuck Schumer, D-N.Y., and Sen. Tom Coburn, R-Okla., broke down in recent weeks, even that proposal, which enjoys 90 percent support in the latest CBS News poll, will be difficult to enact.

And the even more dramatic steps of banning certain types of guns or limiting the number of bullets in ammunition magazines? At this point, the strategy for pushing those proposals through Congress falls somewhere between a hope and a prayer.

Thursday, President Obama will host law enforcement groups and gun violence victims for an event at the White House to gin up greater support for his proposed gun control measures. But the president's continued attention to the issue may be telling in and of itself - yet more evidence that the urgency surround the issue, the public attention paid to it, is flagging.

The receding memory of tragedy, the rising tide of gridlock - it's a confluence of inertia that yields a question, painful for some, elating for others: If Congress cannot summon the support for stronger gun control laws in the wake of the worst mass shooting in recent history, can real gun control ever happen in America? And if not now, when?

In short: is America irreversibly pro-gun?

If you ask the gun lobby, the answer is a resounding yes. "America's 100 million gun owners will not back down, not ever," said the CEO of the National Rifle Association, Wayne LaPierre during a speech before the 2013 Conservative Political Action Conference earlier this month. Americans' tradition of firearm ownership is not something to be addressed or curtailed, gun rights advocates say, it's something to be celebrated. And it's certainly not going anywhere, they promise, despite the attempts by gun control supporters to "exploit" gun tragedies for political ends.

Mark Glaze, the Executive Director of Mayors Against Illegal Guns, disagrees. Glaze's group, formed by New York City Michael Bloomberg to mobilize popular support and pressure lawmakers on behalf of stronger gun laws, has positioned itself as the counterweight to pro-gun interest groups like the National Rifle Association, which has vehemently opposed any move to tighten the nation's gun laws.

Before Newtown, Glaze said in an interview with CBSNews.com, the NRA was "the only show in town." But after that tragedy, he argued, "You have a number of new players with a lot of passion and a lot of money who are dedicated to making sure that the NRA isn't the only organization making itself heard as we have this once-in a generation debate."

But as polls gauging their support seem to slip by the day, Glaze's group has its work cut out for them.

The popularity of stronger gun control seemed to soar in the weeks following the tragedy in Newtown: in December, just after the shootings, 57 percent of respondents in a CBS News poll said gun control laws should be more strict. Fast forward three months, and that number dropped to 47 percent in another CBS News poll released on Monday. In April 2012, before the shooting in Newtown and before a July shooting at a movie theatre in Aurora, Colo., claimed 12 lives, only 39 percent of Americans supported stricter gun laws. In short, broader support for gun control can emerge, but never in a sustained fashion - one problem that vexes gun control advocates.

Opposition to gun control, by contrast, is a firmly entrenched sentiment, particularly on Capitol Hill, where groups like the National Rifle Association have been mostly successful in thwarting any signs of insurrection among wavering legislators. The group's lobbying arm plays the inside game, while the public faces of the NRA - CEO Wayne LaPierre and President David Keene - fan the flames among the NRA faithful, reaping millions of dollars from gun owners and second amendment advocates who fear that their freedom is under assault.

The payoff, to put it modestly, has been handsome. According to reports filed with Federal Election Commission, in just the first two months of 2013, the NRA's political arm has already raised almost 20 percent of what they raised during the 24 months of the 2012 presidential election cycle - a period that has traditionally been the peak of fundraising. In January, the group soaked up $1.1 million dollars; in February, $1.6 million. From January 2011-December 2012, the group raised $14.4 million.

The NRA's leaders have proudly touted their fundraising as crowdsourced - the product of millions of passionate benefactors, not a billionaire with an agenda. "We have people all over, millions of people, sending us five, ten, 15, 20 dollar checks, saying, 'Stand up to this guy'," said Wayne LaPierre about Bloomberg last Sunday on NBC's "Meet the Press."

"He's going to find out that this is a country of the people, by the people, and for the people," LaPierre said, "and he can't spend enough of his [money] to try to impose his will on the American public."

The NRA's own swollen coffers have enabled it to carry a big stick on Capitol Hill, and past fights have shown lawmakers that the group is more than willing to use it. Certainly, the NRA does not speak for all gun owners, whose political influence cannot be measured or channeled by a one organization. Democrats in staunchly pro-gun states, for example, do not need the NRA to tell them that support for gun control could be politically risky - they have millions of constituents for that. What the NRA has done, however, is heighten awareness of guns as a political issue, coalescing and directing the energy (and money) of gun rights supporters.

"The organization's political strength rests on the bipartisan and diverse make-up of its membership and of the millions of nonmember firearms owners who look to the NRA for leadership and their willingness to step up to the plate and the ballot box when their rights are threatened," explained NRA President David Keene in an op-ed on CNN.com.

"It is that second attribute of Second Amendment supporters that has surprised the president and his allies" in this latest fight, Keene added. "Gun owners have been energized rather than cowed. They are presenting a truly united front as they rally to fight for their constitutionally guaranteed rights."

Glaze, however, believes there may be less to the NRA's political muscle than meets the eye.

"The NRA has never had as much electoral influence as it claims to have," he said, explaining, "I think some elected officials have lived in a world in which only hardcore gun rights supporters reliably turned out to vote, and the NRA was the only organization providing political support. That world is gone."

That world might be gone, but the memories of it linger.

The last assault weapons ban was passed in 1994 through a Senate and House that were both strongly Democratic. Then-President Bill Clinton signed it into law as part of the 1994 crime bill. And before the year was out, dozens of Democrats were given the boot as Republicans stormed Congress to claim a bicameral majority for the first time in decades.

Many of the Democrats who lost seats in the bloodletting had voted for the assault weapons ban, among other gun control bills in 1994, and the NRA made sure that their members knew it. The gun lobby's ferocious assault on congressional Democrats during the 1994 midterm election became a key player in the fight to oust Democrats from Congress, according to those who lived through it.

Historian Taylor Branch, who interviewed then-President Bill Clinton for his book "The Clinton Tapes", recounted Clinton's estimation that the NRA had "picked off at least twenty incumbent members of Congress on gun issues alone" during the 1994 midterms. Of the NRA, Clinton explained, "If you don't smoke them out and confront them...they'll cut you to death."

Since then, the Democratic Party has been, well, gun-shy. The issue scarcely surfaced in the 1996 and 2000 campaigns as Democrats labored to shed the impression that they were hostile to gun-owners. In 2004, the Democrats' nominee for president, John Kerry, was ridiculed for staging a photo op in hunting fatigues, carrying a rifle. The symbolism, though clumsy and perceived as patronizing, spoke for itself: this was not a party that was preparing to take on the gun lobby.

The ceasefire persisted until the tragedy in Newtown jolted the parties out of their uneasy holding pattern. The debate about America's gun laws, calcified for decades, was shaken loose, and policymakers began considering the issue in earnest.

But today, despite the impetus provided by a string of mass shootings, from Newtown to Aurora to Tucson to Virginia Tech, gun control advocates are again fighting an uphill battle. The assault weapons ban is virtually dead, and other elements of Mr. Obama's gun control agenda are on shaky political ground. The few proposals that have emerged from the Senate Judiciary Committee have yet to make their way to the floor. No piece of gun legislation has seen a floor vote in either house of Congress. In fact, apart from the executive actions by Mr. Obama in the tragedy's immediate aftermath, not a single thing has happened to seriously change the nature of gun ownership in America. All of this, despite a Senate that has only two fewer Democratic senators than the chamber that passed the original assault weapons ban in 1994.

It's a discouraging environment for those who hoped that the scars of Newtown would be indelibly etched into the political consciousness of policymakers. But despite the slow progress and the uphill climb, Glaze remains optimistic.

"We think we're going to achieve some significant victories this spring and summer," he said, saying an assault weapons ban is still possible despite a "narrow road," and predicting that public opinion would sway wavering lawmakers to support background checks.

And regardless of how these battles pan out, he added, Mayors Against Illegal Guns is prepared to wage the full war, digging in for a siege that could take years.

"Once the dust has cleared, the NRA will still be there, and so will we," he promised.

Meanwhile, the NRA won't be turning off the heat any time soon. "Second Amendment advocates are in no mood to give those who would deny them their rights a pass," said Keene in his CNN op-ed, and they "will vote in the next election."