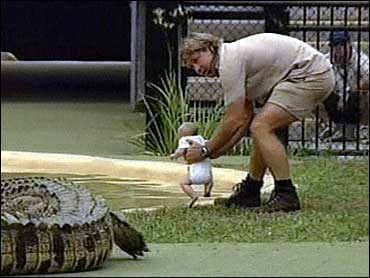 "Crocodile hunter" Steve Irwin's honeymoon with the Australian public could well be over.

The television star and likely candidate for Australian of the Year honors was being compared to disgraced pop star Michael Jackson on Saturday, after he took his month-old son to his first crocodile feeding, a moment that was captured by television cameras and later broadcast.

Before a crowd of onlookers Irwin held his son Robert under one arm and dangled a piece of meat from the other in front of a 13-foot crocodile that quickly snapped up the offering.

The stunt drew comparisons with Michael Jackson dangling his baby son over a hotel balcony in Berlin in Nov. 2002.

But Irwin defended his actions, saying his child was never in danger.

"I was in complete control of the crocodile. Robert was tucked right in my arm," said Irwin, the Herald Sun reported on Saturday.

His American wife Terri, who handed the baby over to Irwin in the enclosure and giggled at the spectacle, agreed.

"It was a wonderful sensory experience for him (the baby). He dug it," she said.

Child support and family groups said Irwin's behavior was almost like child abuse and he should never have exposed his son to such peril.

"Most parents would cringe at the sight of such things," said Bill Muehlenberg from the Australian Family Association, quoted in the Herald Sun.

"One slip, one fall and he is the crocodile's lunch."

It was a major stumble in the so-far unstoppable career of the gregarious Irwin, who was among the few to score an invite to Prime Minister John Howard's barbecue for visiting U.S. President George W. Bush in October.

His Australia Zoo reptile park in northern Australia is popular with tourists, with different state governments at one point getting into a bidding war to woo Irwin for his potential tourist dollar.