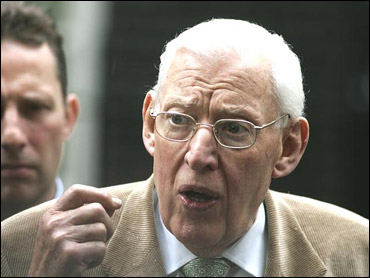 For Robert Smith, a carpet salesman in one of Belfast's roughest Protestant neighborhoods, the latest peace pledge from the Irish Republican Army seemed little more than a slick sales pitch designed to appeal in an age of global terror.

"They have seen what has happened in London and New York and they can't be seen as terrorists any more ... but they're still terrorists," said Smith, 44, who lost two cousins and several friends to IRA attacks.

Sinn Fein party leader Gerry Adams, who reportedly quit the IRA's seven-man command in May after three decades, said Thursday that the IRA is effectively ending its self-declared war to force Northern Ireland out of the United Kingdom.

"There is a time to resist, to stand up and to confront the enemy by arms if necessary," Adams said. "In other words, unfortunately, there is a time for war. There is also a time to engage, to reach out, to put the war behind us all. ... This is that time."

"We will judge the IRA's bona fides over the next months and years based on its behavior and activity," he said.

The IRA's renunciation of political violence and promise to disarm Thursday won easy praise from world leaders - but received a much tougher critique from Belfast's streetwise Catholics and Protestants, who offered views as divided as the city's high-walled neighborhoods.

Smith's own neighborhood boasts a 50-foot-tall mural that honors rifle-toting Protestant militants, who have yet to make the same concrete pledges as the IRA and have caused much more bloodshed this year.

In the IRA power base of Ardoyne, some Catholics said they fear the IRA pledge is a dangerous surrender that would encourage attacks from surrounding Protestant districts. Others predicted IRA members would defect to burgeoning dissident groups opposed to compromise.

"A lot of good men who died would be turning in their graves, just like my stomach is turning over listening to this," said Harry McClafferty, 51, as the IRA news was broadcast in an Ardoyne pub.

Thursday's declaration by Gerry Adams followed a two-year diplomatic showdown between the IRA and its allied Sinn Fein party, on the one hand, and an increasingly unified, impatient world community on the other.

The IRA has faced mounting international pressure to disarm and disband since December, when police blamed it for a world-record $50 million bank robbery.

Adding to the momentum for peace was the knifing death in January of Catholic civilian Robert McCartney, who was killed by IRA members outside a Belfast bar. The murder was a public relations disaster for the IRA as Adams found himself unwelcome at many St. Patrick's Day events in the U.S., including at the White House and in Boston, and McCartney's five sisters and fiancée were invited instead as guests of honor.

In its statement Thursday, the IRA said it had "formally ordered an end to the armed campaign," a fundamental advance on its existing 1997 cease-fire, which had been open-ended. The statement was read aloud by IRA veteran Seanna Walsh in a DVD recording distributed to broadcasters.

British Prime Minister Tony Blair praised what he called "a step of unparalleled magnitude," and leaders in Ireland and the United States also heralded the announcement as historic.

Some analysts and politicians warn that the outlawed IRA - which has not promised to disband - left wiggle room for its members to keep some weapons and control a criminal empire in a territory whose Roman Catholic and Protestant communities remain deeply divided.

The IRA says it has instructed its members to "dump arms." It didn't specify how, or whether members would be allowed to retain any weapons, but said its representative will reopen talks immediately with John de Chastelain, a retired Canadian general who since 1997 has been trying to disarm the IRA and Northern Ireland's myriad other outlawed gangs.

The IRA said it hoped to complete the disposal of its weapon stockpiles "as quickly as possible" and would allow Catholic and Protestant clergy to witness the disarmament work. The IRA surrendered unknown amounts of arms in 2001, 2002 and 2003 amid total secrecy, fueling Protestants' suspicions they were being conned.

The British, Irish and American governments have stressed that the central goal of Northern Ireland's Good Friday peace accord of 1998 - a stable Catholic-Protestant administration - simply would never happen unless the IRA disbanded in fact, if not in name.

That conclusion followed the collapse in 2002 of a moderate-led coalition amid chronic arguments over IRA activities and weapons stockpiles. Sinn Fein had two of 12 posts in that coalition, but would be the major Catholic part of any future coalition because of its growing vote.

From Dublin to Washington, leaders voiced hope that the IRA really is going out of business after killing 1,775 people and maiming thousands more in a dogged but doomed campaign.

In all, 3,650 people have been killed in the conflict over this British territory since 1969, the year the modern "Provisional" IRA was founded in Belfast with the aim of abolishing Northern Ireland as a predominantly Protestant corner of the United Kingdom. Its last major violence came during a 17-month stretch in the mid-1990s that included massive truck bombings in London, and Manchester, England.

"This statement is unprecedented. If the IRA's words are borne out by verified actions, it will be a stark and momentous development," said Irish Prime Minister Bertie Ahern, who has worked closely with Blair since 1997 to broker compromise in the British territory.

In Washington, President Bush's envoy to Northern Ireland, Mitchell Reiss, welcomed the IRA statement as "very encouraging," but he cautioned: "We will soon see whether these words will be turned into deeds."

Former President Clinton, who was the first U.S. leader to intervene in Northern Ireland and spurred Britain to negotiate with Sinn Fein, said outside his suburban New York home that the IRA move was "potentially the biggest thing to happen in this peace process since the Good Friday agreement."

Mr. Clinton said the peace process, begun in 1993, "sure has taken a long time and it's not done yet. But this is a big day."

He added that there is reason for hope because the IRA "engaged in an exhaustive consultative process" before making their peace announcement, "to make absolutely sure that when they did it, they would have enough grassroots support to keep whatever commitment they made in that statement."

Observers point to a key line in the IRA statement as simultaneously its most sweeping and its most broadly debatable.

The IRA said its members have been ordered "to assist the development of purely political and democratic programs through exclusively peaceful means" and "must not engage in any other activities whatsoever."

Adams said he thought the instruction for IRA members to avoid "any other activities" meant they should not engage in crime.