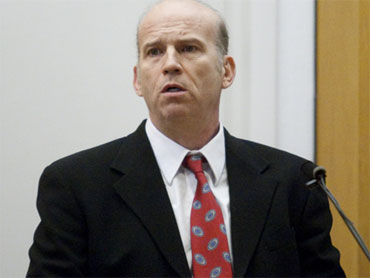 The military has described the pictures of American soldiers abusing Iraqi prisoners as the "misdeeds of a few." But now, reports CBS News National Security Correspondent David Martin, investigators are wondering how many people knew what was going on at the Abu Ghraib prison outside Baghdad.

Six military policemen involved in taking the pictures now face court martial and six others have been reprimanded, and on Monday President Bush urged Defense Secretary Donald Rumsfeld to make sure that any guilty U.S. soldiers are punished for "shameful and appalling acts" against Iraqi prisoners. Members of Congress pushed for swift action.

"They are trying to make it look like this was typical of our operations," Karpinksi told Martin. "I think there's a shared responsibility that's not being mentioned."

"There must have been some officers who knew about it" Solis said. "If it's determined they did know about it and did nothing to stop it, under the law of war and under the uniform code of military code justice, they are equally guilty of the offenses committed."

Long before he was charged with any crime, Sgt. Chip Frederick, one of the guards now facing court martial, sent e-mails home saying, "military intelligence has... told us great job... We help getting them - the prisoners — to talk with the way we handle them."

A Pentagon official says a separate investigation is now being conducted to determine if any military intelligence officers should face charges or be disciplined.

The Army report, said to have been completed in February by Maj. Gen. Antonio Taguba and first disclosed in the May 10 issue of The New Yorker magazine, chronicles abuses at the prison and cites serious Army command failures, The New York Times and Los Angeles Times reported Monday.

Rumsfeld has not read an internal Army report that spelled out abuses at one prison in Iraq, officials said Monday, although they said he has kept abreast of the allegations that Iraqi prisoners have been mistreated.

Rumsfeld has been publicly silent on the controversy since it began when the broadcast photographs taken by U.S. military guards inside the Abu Ghraib prison last fall.

The White House, mindful of the fallout, said Mr. Bush had called Rumsfeld before leaving on a campaign trip Monday and checked on the status of the Defense Department investigation.

"The president wanted to make sure appropriate action is being taken against those responsible for these shameful and appalling acts," said spokesman Scott McClellan.

Pentagon officials are scrambling to explain what was being done to address the problem, which they had known about for months.

The reports said military police were instructed by military intelligence officers to soften up the Iraqi prisoners to make them more compliant during interrogations. Six enlisted MPs have been charged with criminal acts, and U.S. officials said Monday that seven others have been given administrative reprimands.

The CIA, which is involved in some aspects of Iraqi prisoner interrogations, also is investigating, agency officials said.

Asked on Sunday why he had not read Taguba's report, Air Force Gen. Richard Myers, chairman of the Joint Chiefs of Staff, said, "I know what we did, and what we did is we got the deputy secretary of defense to ask the Army to go look theater-wide at our detainee operations and to make sure that we were following all the rules in the law that we follow."

Myers said there was not yet any evidence that a breakdown of U.S. military discipline at Abu Ghraib last fall was more than an isolated problem. Later, however, he said he was not sure whether it was widespread.

Sen. Jeff Bingaman said Defense Department officials have known at least since January about the problems at Abu Ghraib, and he said they were slow to respond.

Referring to Myers' statement that he had not yet read the 53-page Taguba report, Bingaman said, "This is an unacceptable response. If he believed that swift action was required, he might have directed those in ... his command ... to get that report to him immediately upon completion and to give him concrete action items."

Sen. Joseph Biden, a leading member of the Foreign Relations Committee, said Sunday, "I don't get the sense that they understand what an incredible sense of urgency there is here to get this straight, to let the whole world know who, names, places, times, who."