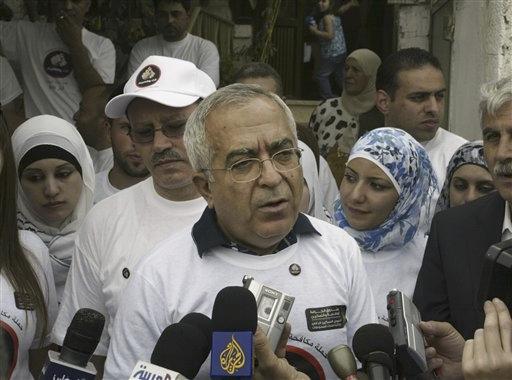 Iraq's interim prime minister said Sunday that efforts to peacefully resolve the conflict in Fallujah have entered their final phase and warned that "our patience is running thin," vowing to clear the city of militants who have carried out some of the bloodiest attacks in Iraq.

Ayad Allawi's strong comments signaled that the start may be near for a major assault on Fallujah that U.S. forces have been preparing. Allawi warned there would likely be civilian casualties if an offensive takes place.

U.S. commanders say Allawi will give the final order to launch the assault, which would aim to restore control to Sunni Muslim towns north and west of the capital ahead of Jan. 31 elections.

In Tikrit, an explosion hit a hotel Sunday in the northern Iraqi city of Tikrit killed 15 Iraqis, police and hospital officials said.

A police official confirmed the incident and said the explosion might have been caused by a projectile. He had no further details.

Tikrit, about 80 miles north of Baghdad, is the hometown of former leader Saddam Hussein.

The Pentagon has ordered about 6,500 soldiers in Iraq to extend their tours to prepare for the planned January elections, The New York Times reports. About 3,500 troops will stay an extra two months, and another 3,000 will spend an extra two and a half weeks.

During a press conference in Baghdad, Allawi vowed that the elections, a key step in plans to move Iraq toward democracy," will take place on schedule." The country's deteriorating security situation has led to doubts that nationwide voting can take place in Iraq.

"The terrorists and insurgents continue to use Fallujah and the Fallujah people as a shield for their murderous acts," Allawi said. "Some of the most incredible crimes have been committed in Fallujah and out of Fallujah by these terrorists."

He said he hoped to reach a negotiated solution, but "if we cannot, I have no choice but to secure a military solution."

"I will do so with a heavy heart, for even with the most careful plan, there will be some loss of innocent lives," he said. "But I owe, owe it to the Iraqi people to defend them from the violence and the terrorists and insurgents."

Fallujah, 40 miles west of Baghdad, is considered the strongest bastion of Sunni insurgents who have carried out a spiraling campaign of bombings, ambushes and kidnappings. Allawi's warning came after a particularly bloody day even by the standards of this conflict-ravaged country.

In all, at least 30 people died Saturday in politically motivated violence across Iraq — stark evidence of a security situation threatening to spiral out of control.

Among them were eight Marines killed by a car bomb near Fallujah. The U.S. military earlier said a ninth Marine was also killed but later corrected the report, confirming the death toll of eight.

Also, early Sunday, the Japanese government confirmed that the decapitated body of a young Asian male - found wrapped in an American flag and dumped in an insurgent-infested neighborhood of Baghdad - was that of Japanese hostage Shosei Koda, 24, said Japanese Foreign Minister Nobutaka Machimura.

Koda's abduction was claimed by the al Qaeda in Iraq group, led by Jordanian militant Abu Musab al-Zarqawi, who Iraqi and U.S. leaders claim is in Fallujah. Allawi has demanded Fallujah's city leaders hand over al-Zarwaqi to avoid an attack, though the leaders deny he is there.

Allawi said he had met with tribal leaders from the area Saturday and told them "the window for such peaceful settlement is closing."

"I explained that I hoped that the peaceful citizens of the areas where the terrorists and insurgents are based will help the government to arrest them," he said. "They assured me that they would work with my government to achieve this."

Allawi also said authorities have arrested 167 Arab foreign fighters, who are in Iraq's custody. Most of them came from Syria, Saudi Arabia, Egypt and Sudan.

He said Iraqi officials are preparing lists of people living in other Arab nations that are wanted for financing and committing terrorism.

"We will ask the (Arab) authorities to hand them to us." he said.

U.S. officials have repeatedly cited concerns over Iraq's porous borders, saying that foreign fighters have flooded in from neighboring countries to join the insurgency.

U.S. commanders have estimated that up to 5,000 Islamic militants, Saddam Hussein loyalists and common criminals are holed up in the insurgent bastion.

U.S. Marines carried out a three-week siege of Fallujah in April, but when hundreds of people were killed, the military was forced to back down. Insurgents have since tightened their grip on the city, and several other cities in the Sunni Triangle north and west of Baghdad have fallen under their sway.

Clashes erupted Sunday between U.S. forces and insurgents in the town of Ramadi, 70 miles west of Baghdad, leaving seven people dead, according to hospital officials.

The fighting broke out in the eastern and central part of the city. Sporadic gunfire could be heard near City Hall. Shops and schools in the area have been closed for days due to the deteriorating security situation, residents said.

The Pentagon has devised a new strategy aimed at driving a wedge between various insurgent factions in Iraq, defense officials tell The Washington Post. Senior U.S. military officers now estimate there are as many as 12,000 hard-core militants.