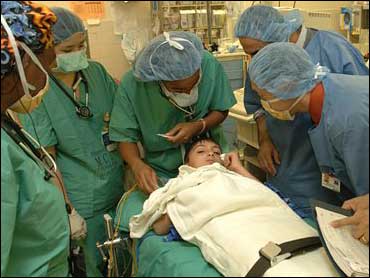 An 11-year-old boy from Iraq underwent heart surgery Monday in New York, the first of four ailing children who will be treated this week after their families sought help from the U.S. military.

Wsam Rabea was vulnerable to sudden death from a heart problem until the early morning operation by Dr. Samuel Weinstein, director of pediatric heart surgery at the Children's Hospital of Montefiore Medical Center, officials said.

Wsam and the three other Iraqi children arrived in New York on Friday with their fathers in what the hospital is calling "Operation Iraqi Hearts."

The children's families were among 60 who had sought help from the American military's Civic Assistance Command in Baghdad. They came to the attention of Army Reservist Sgt. Marikay Satryano, a New York City schoolteacher who was stationed in Amman, Jordan.

With help from the service group Rotary International, Satryano arranged for the children to be taken from Baghdad to Amman for treatment, and it was determined that several children with life-threatening defects needed surgery in the United States.

Weinstein plans to operate on two boys, ages 6 and 14, on Tuesday and a 12-year-old girl on Wednesday.

Rotary's Gift of Life program had contacted Weinstein, who agreed to donate his services. The Rotary program was helping pay for the hospital stays, along with another group, the Rachel B. Cooper Foundation.