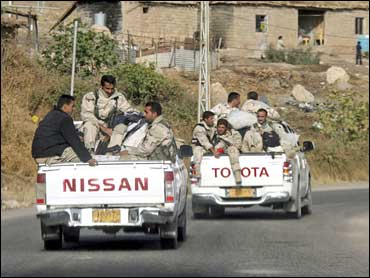 Iraq will set up more checkpoints along its northern frontier to keep out supplies for Kurdish rebels, who have been striking the Turkish military in raids across the border, the Iraqi foreign minister said Wednesday.

Meanwhile, the Pentagon says it has started giving more intelligence - "lots of intelligence" - to Turkey to help it against the rebels.

The U.S. has in recent days sent U-2 spy planes to the border area to try to collect better information on the militants and regional Iraqi authorities have sent some of their troops there, one official said.

Turkey has complained for months about what it has said is a lack of U.S. support against the rebels from the Kurdistan Workers' Party, known by its Kurdish acronym PKK. And Ankara has threatened a full-scale ground attack into northern Iraq if the U.S. and Iraqi officials don't do something about the rebels.

"We have given them more and more intelligence as a result of the recent concerns," said Defense Department Press Secretary Geoff Morrell.

Also Wednesday, reports from Turkey said Prime Minister Recep Tayyip Erdogan had accused the leader of Iraq's Kurdish region of "aiding and abetting" the separatist rebels in a sign of growing frustration with Iraqi Kurds' refusal to crack down on them.

Massoud Barzani (video)
came as the Kurdish leader complained that he was not included in talks with Turkey.

He voiced fears that Ankara may be planning a wider campaign against the northern Kurdish region of Iraq instead of an operation targeting only rebels with the Kurdistan Workers' Party, or PKK.

Though Barzani's forces fought with Turkish troops against the rebels in previous incursions in the 1990s, Turkey has rejected dialogue with him since he made inflammatory statements about Turkey amid rising Kurdish nationalism after the invasion of Iraq.

Iraq's Foreign Minister Hoshyar Zebari said Iraq would set up checkpoints along the border with heavily Kurdish southeastern Turkey to stop fuel, food and other supplies from reaching the Iraq-based PKK, which has killed dozens of people inside Turkey over the past month. He said they would also take other unspecified measures against the rebels.

Zebari, who is Kurdish, told reporters that Iraq would also restrict the movement of PKK fighters in order to "prevent them from reaching the populated towns and areas" inside Turkey.

The Iraqi official's comments came after he discussed the border issue with Iranian Foreign Minister Manouchehr Mottaki in Baghdad.