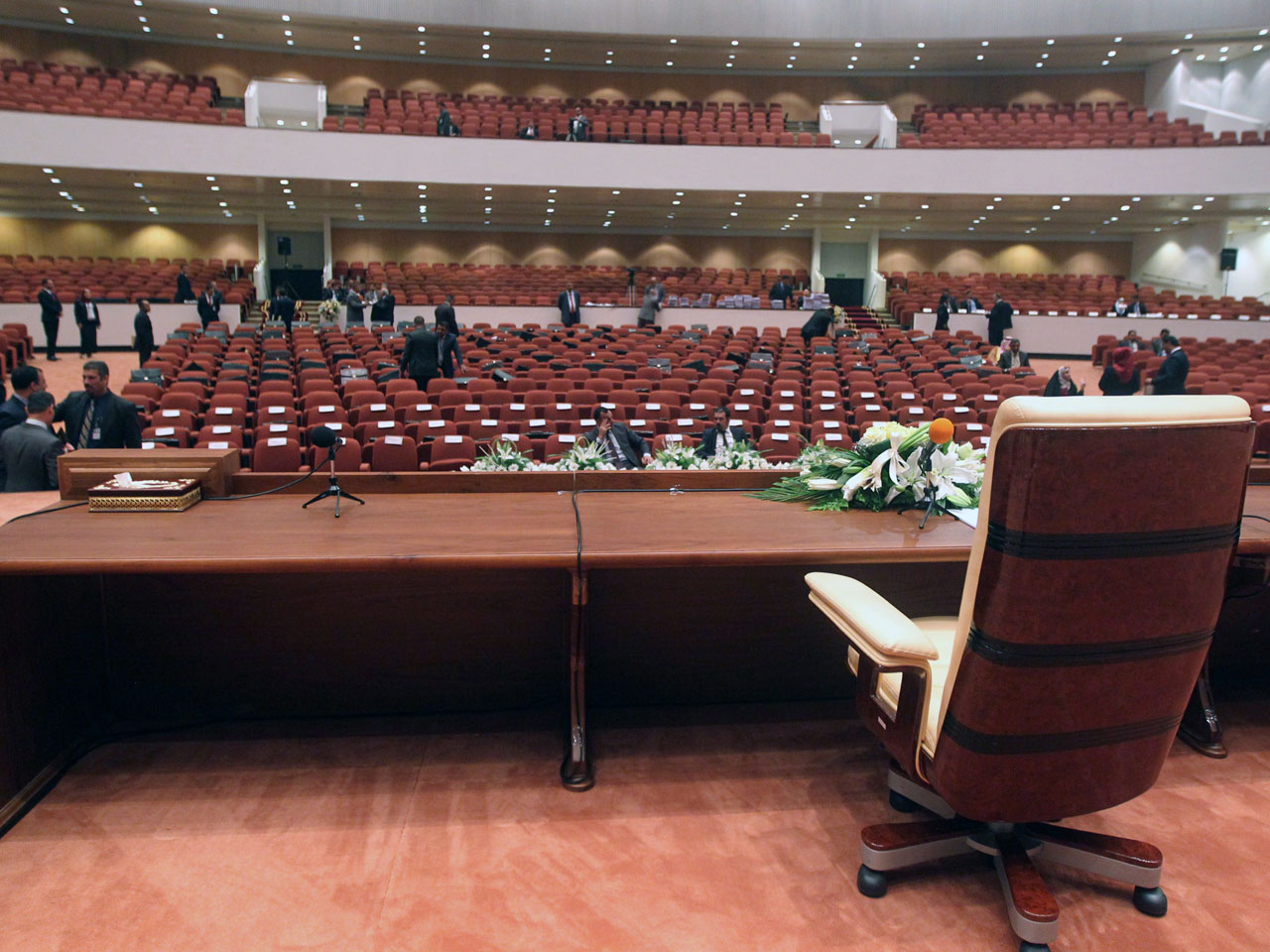 BAGHDAD - With political leaders deadlocked, Iraq's parliament postponed on Monday its next session until mid-August, delaying the formation of a new government for weeks despite the threat from extremists who have seized control of a large chunk of the country and declared the establishment of an Islamic state.

Also on Monday, a mortar attack killed the commander of the Iraqi army's 6th division, Maj. Gen. Najim Abdullah Ali, while he was overseeing a raid on the Anbar village of Karma, army spokesman Brig. Gen. Saad Maan Ibrahim said.

Top U.S. defense officials, who have deployed advisers to the region to assess the state of the Iraqi military, said last week the security forces were able to defend the capital but would have difficulty going on the offensive to recapture lost territory, mainly because of logistical weaknesses, Reuters reports.

Prime Minister Nouri al-Maliki lamented Ali's death, calling him a "holy warrior" who was "martyred in the battlefield as he was fighting the terrorists."

Sunni militants seized control of the city of Fallujah, near Karma, and parts of the Anbar provincial capital of Ramadi in January. The government has since reasserted its control of Ramadi, but Fallujah remains in insurgent hands.

In Baghdad a few hours after Ali's death, a suicide bomber rammed a vehicle packed with explosives into a checkpoint in the Shiite neighborhood of Kazimiyah, killing five policemen and three civilians, a police official said. He said 16 people were wounded.

Both officials spoke on condition of anonymity as they were not authorized to release information.

The political impasse, coupled with the military's sluggish counteroffensive, underlined just how difficult a task Iraqis face as they try to keep their country from fracturing along sectarian and ethnic lines.

The United States, which withdrew the last American troops from Iraq in 2011, and other world powers have pressed for the quick formation of a new government, as has Iraq's top Shiite cleric, the revered Ayatollah Ali al-Sistani. Many Iraqi politicians and their counterparts in the West are pushing for the removal of al-Maliki, whose fiercely pro-Shiite leadership they blame for alienating the Sunni minority and fueling support for the insurgency.

Lawmakers met last week for the new parliament's first session since April elections, but the meeting ended without agreeing on a new prime minister, president and speaker of parliament. The legislature had been expected to meet again Tuesday, but that session was called off since no progress had been made over the past week untangling the political situation.

Acting speaker of parliament Mahdi al-Hafidh said in a statement Monday that "after discussions with the heads of the blocs and concerned parties" the next session will be held instead on Aug. 12. He expressed hope that "another chance will be available for more dialogue and discussions to arrange that meeting."

The Shiite alliance, an umbrella group that includes al-Maliki's State of Law bloc, criticized the lengthy break, saying it doesn't serve the country's interests. It urged al-Hafidh to reconsider and set a new date no more than a week away.

But Sunni lawmaker Dhafir al-Ani said it was the Shiite alliance that demanded the postponement due to difficulties within its ranks in settling on a candidate for prime minister.

Under an informal system that took root after the 2003 U.S.-led invasion that ousted Saddam Hussein, the prime minister's job goes to a Shiite, the president's post to a Kurd and the speaker of parliament's chair to a Sunni.

The main point of contention right now is the post of prime minister, which holds most of the power in Iraq.

The Shiite alliance has yet to decide on its candidate for the job. The Sunnis and Kurds have refused, in turn, to present their respective nominees for speaker and president.

Al-Maliki, whose State of Law bloc won the largest share of seats in April's election, has vowed he will not abandon his bid for a third consecutive term. But he didn't win a majority in parliament and so needs allies to form a government, setting the stage for what looks likely to be protracted political negotiations.

Al-Maliki's opponents - and many former allies - accuse him of monopolizing power during his eight years in office and contributing to the current crisis by failing to promote reconciliation with Sunnis.

The militant offensive spearheaded by the Islamic State extremist group has tapped into the Sunni community's grievances with al-Maliki's Shiite-led government. Sunnis complain of being marginalized and unfairly targeted by the security forces.

Post-Saddam Iraq has a history of white-knuckle political negotiations. In 2010, it took leaders some nine months to broker an agreement on a new government, eventually settling on al-Maliki.

But four years ago, Iraq had not watched a vast swath of the country - including the second-largest city - fall into the hands of Sunni extremists in the span of weeks. And there's no guarantee that even with a new government Iraq can roll back the militants.

The Islamic State group spearheaded the recent blitz, which overran most Sunni-majority areas but has slowed since encountering stronger resistance in Shiite-dominated areas.

Last week, the group declared the establishment of a caliphate ruled by Shariah law in the land it controls in Iraq and neighboring Syria.

Abu Bakr al-Baghdadi, the leader of the Islamic State of Iraq and the Levant (ISIS,) apparently emerged from the shadows recently in a video posted on the ISIS website that claims to show him delivering a sermon in Mosul. In it, he called for Muslims all over the world to join his cause. While the Iraqi government has said it cannot confirm that it was actually al-Baghdadi in the video, State Department spokesperson Jen Psaki said Monday, "We have no reason to doubt the authenticity of the video."

The Iraqi military launched an offensive late last month aimed at recapturing the northern city of Tikrit from the militants. The military has claimed some gains, but the insurgents remain firmly in control of the city and have harried the army with roadside bombs.